Encyclopedia
The Tank Cruiser, Ram was a cruiser tank
Cruiser tank
The cruiser tank was a British tank concept of the inter-war period. This concept was the driving force behind several tank designs which saw action during the Second World War....
designed and built by Canada
Canada
Canada is a North American country consisting of ten provinces and three territories. Located in the northern part of the continent, it extends from the Atlantic Ocean in the east to the Pacific Ocean in the west, and northward into the Arctic Ocean...
in the Second World War, based on the U.S. M3 Medium
M3 Lee
The Medium Tank M3 was an American tank used during World War II. In Britain the tank was called "General Lee", named after Confederate General Robert E. Lee, and the modified version built with a new turret was called the "General Grant", named after U.S. General Ulysses S. Grant.Design commenced...
tank. Due to the entrance of the United States into the war and the superior design of the American Sherman, it was used exclusively for training purposes and was never used in combat.

Due to the loss of the majority of the United Kingdom's tank force in France, tank production in the UK
United Kingdom
The United Kingdom of Great Britain and Northern IrelandIn the United Kingdom and Dependencies, other languages have been officially recognised as legitimate autochthonous languages under the European Charter for Regional or Minority Languages...
at the start of the war was insufficient to supply Canada as well, so it was decided to manufacture locally. The Montreal Locomotive Works
Montreal Locomotive Works
Montreal Locomotive Works was a Canadian railway locomotive manufacturer which existed under several names from 1883–1985, producing both steam and diesel locomotives. For a number of years it was a subsidiary of the American Locomotive Company...
, which was a subsidiary of the American Locomotive Company
American Locomotive Company
The American Locomotive Company, often shortened to ALCO or Alco , was a builder of railroad locomotives in the United States.-Early history:...
, was designated the Canadian Tank Arsenal.
Initial production was of Valentine tank
Valentine tank
The Tank, Infantry, Mk III, Valentine was an infantry tank produced in the United Kingdom during the Second World War. More than 8,000 of the type were produced in 11 different marks plus various purpose-built variants, accounting for approximately a quarter of wartime British tank production...
s, many of which would be supplied to the USSR. Although the Valentine used a number of US produced parts, limitations in the availability of armour plate affected Valentine production.
The Canadians were interested in production of the M3 Medium, and the British Tank Mission contributed a tank expert to design a new hull that could take a larger turret while retaining the lower hull of the M3.
The new hull was cast rather than welded or rivetted and lower than that of the M3.

Canadian engineers however ran into several problems when developing the tank. The Ram tank was developed with a turret which could traverse in mind, a full cast iron hull for reinforced protection, a lower ride height, and good reliability. Many Canadian engineers however did not know how to produce such equipment. Canada had never produced a tank before. Along with the lack of knowledge, supplies were not within Canadian factories and Canada relied heavily on United States and British materials to complete the construction of the Ram.

Although the ability to mount a large 75 mm gun was suggested, the turret was built to take the QF 6 pounder
Ordnance QF 6 pounder
The Ordnance Quick-Firing 6-pounder 7 cwt, or just 6 pounder, was a British 57 mm gun, their primary anti-tank gun during the middle of World War II, as well as the main armament for a number of armoured fighting vehicles...
. As it was not immediately available, early production (55 tanks) were fitted with the two pounder
Ordnance QF 2 pounder
The Ordnance QF 2-pounder was a British anti-tank and vehicle-mounted gun, employed in the Second World War. It was actively used in the Battle of France, and during the North Africa campaign...
gun.

A prototype Ram was completed in June 1941. General production of the Ram I began in November of the same year. This was fitted with side doors in the hull and an auxiliary machine gun turret in the front - these features would be discarded in later modifications. By February 1942, production had switched to the Ram II model with a 6-pounder gun and continued until July 1943, when a decision was made to adopt the Sherman tank for all British and Canadian units. By that point 1,948 vehicles, including 84 artillery observation post vehicles, had been completed.

As built, the Ram was never used in combat as a tank, but for crew training in Great Britain up to mid 1944. The observation post vehicles and conversions of the Ram did see active service in Europe. The tanks were rebuilt in army workshops near the front line.

In 1945 the Royal Netherlands Army
Royal Netherlands Army
The Royal Netherlands Army is the land forces element of the military of the Netherlands.-Short history:The Royal Netherlands Army was raised on 9 January 1814, but its origins date back to 1572, when the so-called Staatse Leger was raised...
got permission from the Canadian government to take possession for free of all Ram tanks in army dumps on Dutch territory
Netherlands
The Netherlands is a constituent country of the Kingdom of the Netherlands, located mainly in North-West Europe and with several islands in the Caribbean. Mainland Netherlands borders the North Sea to the north and west, Belgium to the south, and Germany to the east, and shares maritime borders...
. Those not already converted into Kangaroos
Kangaroo (armoured personnel carrier)
A Kangaroo was a World War II Commonwealth or British armoured personnel carrier , created by conversion of a tank chassis. Created as an expedient measure by the Canadian Army, the Kangaroos were so successful that they were soon being used by British forces as well...
were used to equip the 1st and 2nd Tank Battalion (1e en 2e Bataljon Vechtwagens), the very first Dutch tank units. These had a nominal organic strength of 53 each. However it proved to be impossible to ready enough tanks to attain this strength, as the vehicles were in a very poor state of maintenance. In 1947 the UK provided 44 Ram tanks from its stocks, that were in a better condition. Forty of these had been rebuilt with the British 75 mm gun; four were OP/Command vehicles with a dummy gun. This brought the operational total for that year to just 73, including two Mark I's. In 1950 only fifty of these were listed as present. The Ram tanks (together with the Sherman tanks of the three other tank battalions, in part simply taken without permission) were replaced by Centurion Tank
Centurion tank
The Centurion, introduced in 1945, was the primary British main battle tank of the post-World War II period. It was a successful tank design, with upgrades, for many decades...
s leased by the U.S. Government in 1952. Some Ram tanks were used in the fifties as static pillboxes in the IJssel Line, their hulls dug in and embedded within two feet of concrete. One Dutch Ram tank, an OP/Command vehicle, survives at the Dutch Cavalry Museum
Dutch Cavalry Museum
The Dutch Cavalry Museum is located in the centre of The Netherlands in the city of Amersfoort. The museum is hosted in two large buildings at the Bernhardkazerne army barracks....
in Amersfoort
Amersfoort
Amersfoort is a municipality and the second largest city of the province of Utrecht in central Netherlands. The city is growing quickly but has a well-preserved and protected medieval centre. Amersfoort is one of the largest railway junctions in the country, because of its location on two of the...
.

Ram tanks can also be seen at the Canadian War Museum
Canadian War Museum
The Canadian War Museum is Canada’s national museum of military history. Located in Ottawa, Ontario, the museum covers all facets of Canada’s military past, from the first recorded instances of death by armed violence in Canadian history several thousand years ago to the country’s most recent...
, in Worthington Park at Canadian Forces Base Borden
CFB Borden
Canadian Forces Base Borden is a Canadian Forces base located in Ontario.The historic birthplace of the Royal Canadian Air Force, CFB Borden is the largest training facility in the Canadian Forces...
, in front of the Beatty Street Armoury
Beatty Street Drill Hall
The Beatty Street Drill Hall is a Canadian Forces armoury located at 620 Beatty Street in Vancouver, British Columbia. It is the home of The British Columbia Regiment , an armoured reconnaissance reserve regiment, the oldest military unit in Vancouver, and the most senior militia in the province...
in Vancouver
Vancouver
Vancouver is a coastal seaport city on the mainland of British Columbia, Canada. It is the hub of Greater Vancouver, which, with over 2.3 million residents, is the third most populous metropolitan area in the country,...
, and at the Bovington Tank Museum
Bovington Tank Museum
The Tank Museum is a collection of armoured fighting vehicles in the United Kingdom that traces the history of the tank. With almost 300 vehicles on exhibition from 26 countries it is the second-largest collection of tanks and armoured fighting vehicles in the world.The Musée des Blindés in France...
(Ram and Kangaroo). 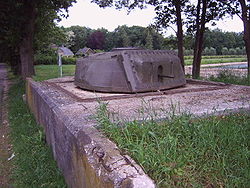 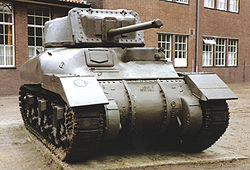 A flamethrower equipped tank. The first Badgers were Ram Kangaroos with the Wasp II flamethrowing equipment (as used on the Universal Carrier
Universal Carrier
The Universal Carrier, also known as the Bren Gun Carrier is a common name describing a family of light armoured tracked vehicles built by Vickers-Armstrong. Produced between 1934 and 1960, the vehicle was used widely by British Commonwealth forces during the Second World War...
) installed in place of the bow MG. Later models were turret rams with the equipment in place of the main gun.

An armoured vehicle to function as a mobile observation posts for the Forward Observation Officers (FOO) of Sexton self-propelled gun units, based on Ram Mk II. The gun was replaced by a dummy, and two Wireless
Radio
Radio is the transmission of signals through free space by modulation of electromagnetic waves with frequencies below those of visible light. Electromagnetic radiation travels by means of oscillating electromagnetic fields that pass through the air and the vacuum of space...
sets were fitted. Crew of 6. 84 were built in 1943.

Like OP but with special equipment for gun position officers of SP artillery regiments. Had Tannoy loudspeakers mounted.


Sexton
Sexton (artillery)
The 25pdr SP, tracked, Sexton was a self-propelled artillery vehicle of World War II, based on an American tank hull design, built by Canada for the British Army, and associated Commonwealth forces, and some of the other Allies....