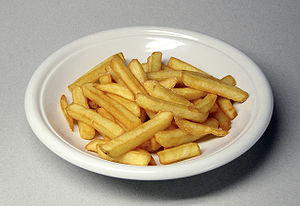 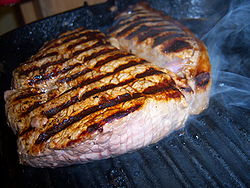 The cuisines of Western countries are diverse by themselves, although there are common characteristics that distinguishes Western cooking from cuisines of Asian countries and others. Compared with traditional cooking of Asian countries, for example, meat is more prominent and substantial in serving-size. Steak
Steak
A steak is a cut of meat . Most are cut perpendicular to the muscle fibers, improving the perceived tenderness of the meat. In North America, steaks are typically served grilled, pan-fried, or broiled. The more tender cuts from the loin and rib are cooked quickly, using dry heat, and served whole...
in particular is a common dish across the West. Similarly to some Asian cuisines, Western cuisines also put substantial emphasis on sauces as condiments, seasonings, or accompaniments (in part due to the difficulty of seasonings penetrating the often larger pieces of meat used in Western cooking). Many dairy products are utilised in the cooking process, except in nouvelle cuisine
Nouvelle Cuisine
Nouvelle cuisine is an approach to cooking and food presentation used in French cuisine. By contrast with cuisine classique, an older form of French haute cuisine, nouvelle cuisine is characterized by lighter, more delicate dishes and an increased emphasis on presentation.-History:The term...
. Wheat
Wheat
Wheat is a cereal grain, originally from the Levant region of the Near East, but now cultivated worldwide. In 2007 world production of wheat was 607 million tons, making it the third most-produced cereal after maize and rice...
-flour bread has long been the most common sources of starch
Starch
Starch or amylum is a carbohydrate consisting of a large number of glucose units joined together by glycosidic bonds. This polysaccharide is produced by all green plants as an energy store...
in this cuisine, along with pasta
Pasta
Pasta is a staple food of traditional Italian cuisine, now of worldwide renown. It takes the form of unleavened dough, made in Italy, mostly of durum wheat , water and sometimes eggs. Pasta comes in a variety of different shapes that serve for both decoration and to act as a carrier for the...
, dumpling
Dumpling
Dumplings are cooked balls of dough. They are based on flour, potatoes or bread, and may include meat, fish, vegetables, or sweets. They may be cooked by boiling, steaming, simmering, frying, or baking. They may have a filling, or there may be other ingredients mixed into the dough. Dumplings may...
s and pastries
Pastry
Pastry is the name given to various kinds of baked products made from ingredients such as flour, sugar, milk, butter, shortening, baking powder and/or eggs. Small cakes, tarts and other sweet baked products are called "pastries."...
, although the potato
Potato
The potato is a starchy, tuberous crop from the perennial Solanum tuberosum of the Solanaceae family . The word potato may refer to the plant itself as well as the edible tuber. In the region of the Andes, there are some other closely related cultivated potato species...
has become a major starch plant in the diet of Europeans and their diaspora since the European colonisation of the Americas. Maize
Maize
Maize known in many English-speaking countries as corn or mielie/mealie, is a grain domesticated by indigenous peoples in Mesoamerica in prehistoric times. The leafy stalk produces ears which contain seeds called kernels. Though technically a grain, maize kernels are used in cooking as a vegetable...
is much less common in most European diets than it is in the Americas
Americas
The Americas, or America , are lands in the Western hemisphere, also known as the New World. In English, the plural form the Americas is often used to refer to the landmasses of North America and South America with their associated islands and regions, while the singular form America is primarily...
; however corn meal, or polenta
Polenta
Polenta is a dish made from boiled cornmeal. The word "polenta" is borrowed from Italian.-Description:Polenta is made with ground yellow or white cornmeal , which can be ground coarsely or finely depending on the region and the texture desired.As it is known today, polenta derives from earlier...
, is a major part of the cuisine of Italy
Italy
Italy , officially the Italian Republic languages]] under the European Charter for Regional or Minority Languages. In each of these, Italy's official name is as follows:;;;;;;;;), is a unitary parliamentary republic in South-Central Europe. To the north it borders France, Switzerland, Austria and...
and the Balkans
Balkans
The Balkans is a geopolitical and cultural region of southeastern Europe...
. 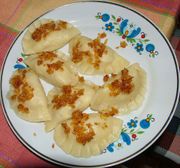 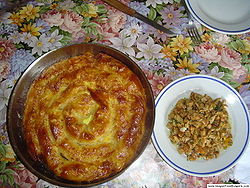 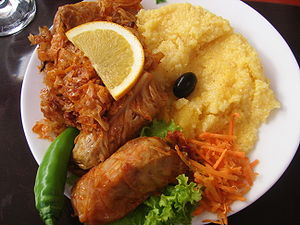 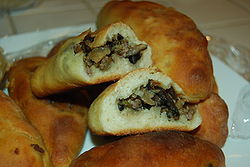 Armenian cuisine
Armenian cuisine
Armenian cuisine includes the foods and cooking techniques of the Armenian people, the Armenian diaspora and traditional Armenian foods and dishes. The cuisine reflects the history and geography where Armenians have lived as well as incorporating outside influences...
Azerbaijani cuisine Belarusian cuisine
Belarusian cuisine
Belarusian cuisine shares the same roots with cuisines of other Eastern and Northern European countries, basing predominantly on meat and various vegetables typical for the region.-History:...
Bulgarian cuisine
Bulgarian cuisine
Bulgarian cuisine is a representative of the cuisine of Southeastern Europe. Essentially South Slavic, it shares characteristics with other Balkans cuisines...
Czech cuisine
Czech cuisine
Czech cuisine has both influenced and been influenced by the cuisines of surrounding countries. Many of the fine cakes and pastries that are popular in Central Europe originated in the Czech lands. Czech cuisine is marked by a strong emphasis on meat dishes. Pork is quite common, and beef and...
Georgian cuisine Hungarian cuisine Moldovan cuisine Polish cuisine
Polish cuisine
Polish cuisine is a style of cooking and food preparation originating from Poland. It has evolved over the centuries due to historical circumstances. Polish national cuisine shares some similarities with other Central European and Eastern European traditions as well as French and Italian...
Romanian cuisine
Romanian cuisine
Romanian cuisine is a diverse blend of different dishes from several traditions with which it has come into contact, but it also maintains its own character...
Russian cuisine
Russian cuisine
Russian cuisine is diverse, as Russia is the largest country in the world. Russian cuisine derives its varied character from the vast and multi-cultural expanse of Russia. Its foundations were laid by the peasant food of the rural population in an often harsh climate, with a combination of... 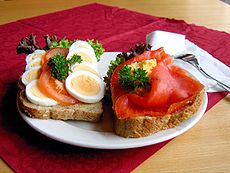 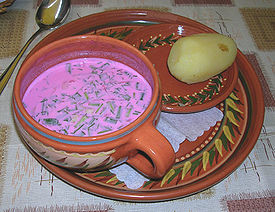 British cuisine
British cuisine
English cuisine encompasses the cooking styles, traditions and recipes associated with England. It has distinctive attributes of its own, but also shares much with wider British cuisine, largely due to the importation of ingredients and ideas from places such as North America, China, and India... 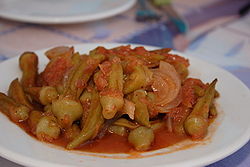 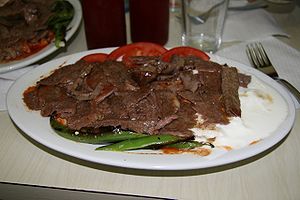 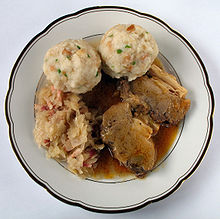 Austrian cuisine Belgian cuisine
Belgian cuisine
Belgium has been called a nation of gourmands rather than gourmets: a country, in other words, where "big cuisine" comes before "fine cuisine". It has been said that Belgium serves food of French quality in German quantities.-Frieten or frites:...
Dutch cuisine
Dutch cuisine
Dutch cuisine is shaped by the practice of fishing and farming, including the cultivation of the soil for raising crops and the raising of domesticated animals, and the history of the Netherlands.-History:...
French cuisine
French cuisine
French cuisine is a style of food preparation originating from France that has developed from centuries of social change. In the Middle Ages, Guillaume Tirel , a court chef, authored Le Viandier, one of the earliest recipe collections of Medieval France...
The source of this article is wikipedia, the free encyclopedia.  The text of this article is licensed under the GFDL.