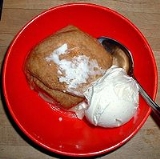 Dumplings are cooked balls of dough
Dough
Dough is a paste made out of any cereals or leguminous crops by mixing flour with a small amount of water and/or other liquid. This process is a precursor to making a wide variety of foodstuffs, particularly breads and bread-based items , flatbreads, noodles, pastry, and similar items)...
. They are based on flour
Flour
Flour is a powder which is made by grinding cereal grains, other seeds or roots . It is the main ingredient of bread, which is a staple food for many cultures, making the availability of adequate supplies of flour a major economic and political issue at various times throughout history...
, potato
Potato
The potato is a starchy, tuberous crop from the perennial Solanum tuberosum of the Solanaceae family . The word potato may refer to the plant itself as well as the edible tuber. In the region of the Andes, there are some other closely related cultivated potato species...
es or bread
Bread
Bread is a staple food prepared by cooking a dough of flour and water and often additional ingredients. Doughs are usually baked, but in some cuisines breads are steamed , fried , or baked on an unoiled frying pan . It may be leavened or unleavened...
, and may include meat
Meat
Meat is animal flesh that is used as food. Most often, this means the skeletal muscle and associated fat and other tissues, but it may also describe other edible tissues such as organs and offal...
, fish
Fish (food)
Fish is a food consumed by many species, including humans. The word "fish" refers to both the animal and to the food prepared from it. Fish has been an important source of protein for humans throughout recorded history.-Terminology:...
, vegetables, or sweets
SweetS
was a Japanese idol group. Put together through auditions, the group debuted in 2003 on the avex trax label. Although the group met minor success, they disbanded after three years with the release of a final single in June 2006....
. They may be cooked by boiling
Boiling
Boiling is the rapid vaporization of a liquid, which occurs when a liquid is heated to its boiling point, the temperature at which the vapor pressure of the liquid is equal to the pressure exerted on the liquid by the surrounding environmental pressure. While below the boiling point a liquid...
, steaming
Steaming
Steaming is a method of cooking using steam. Steaming is considered a healthy cooking technique and capable of cooking almost all kinds of food.-Method:...
, simmering
Simmering
Simmering is a food preparation technique in which foods are cooked in hot liquids kept at or just below the boiling point of water , but higher than poaching temperature...
, frying
Frying
Frying is the cooking of food in oil or another fat, a technique that originated in ancient Egypt around 2500 BC. Chemically, oils and fats are the same, differing only in melting point, but the distinction is only made when needed. In commerce, many fats are called oils by custom, e.g...
, or baking
Baking
Baking is the technique of prolonged cooking of food by dry heat acting by convection, and not by radiation, normally in an oven, but also in hot ashes, or on hot stones. It is primarily used for the preparation of bread, cakes, pastries and pies, tarts, quiches, cookies and crackers. Such items...
. They may have a filling, or there may be other ingredients mixed into the dough. Dumplings may be sweet or spicy. They can be eaten by themselves, in soup
Soup
Soup is a generally warm food that is made by combining ingredients such as meat and vegetables with stock, juice, water, or another liquid. Hot soups are additionally characterized by boiling solid ingredients in liquids in a pot until the flavors are extracted, forming a broth.Traditionally,...
s or stew
Stew
A stew is a combination of solid food ingredients that have been cooked in liquid and served in the resultant gravy. Ingredients in a stew can include any combination of vegetables , meat, especially tougher meats suitable for slow-cooking, such as beef. Poultry, sausages, and seafood are also used...
s, with gravy
Gravy
Gravy is a sauce made often from the juices that run naturally from meat or vegetables during cooking. In North America the term can refer to a wider variety of sauces and gravy is often thicker than in Britain...
, or in any other way. While some dumplings resemble solid water
Water
Water is a chemical substance with the chemical formula H2O. A water molecule contains one oxygen and two hydrogen atoms connected by covalent bonds. Water is a liquid at ambient conditions, but it often co-exists on Earth with its solid state, ice, and gaseous state . Water also exists in a...
boiled doughs, such as gnocchi
Gnocchi
Gnocchi are various thick, soft dumplings. They may be made from semolina, ordinary wheat flour, flour and egg, flour, egg, and cheese, potato, bread crumbs, or similar ingredients. The smaller forms are called gnocchetti....
, others such as wonton
Wonton
Not to be confused with WantonA wonton is a type of dumpling commonly found in a number of Chinese cuisines.-Filling:...
s resemble meatball
Meatball
A meatball is made from an amount of ground meat rolled into a small ball, sometimes along with other ingredients, such as breadcrumbs, minced onion, spices, and possibly eggs...
s with a thin dough covering.
Fufu
Fufu
Fufu, , is a staple snack of West and Central Africa. It is a thick paste usually made by boiling starchy root vegetables in water and pounding with a mortar and pestle until the desired consistency is reached...
fit the definition of a dumpling in that they are starchy balls of dough that are steamed.

What is the region of dumplings?
More
x