Results showed a general defeat of governing parties and an increase in representatives from eurosceptic
EuroSceptic
EuroSceptic is the second album of British singer Jack Lucien. It was released in October 2009.Due to being an album influenced by Europop, it features songs with parts in different languages...
parties. No majority was achieved. The balance of power in the Parliament remained the same (largest party EPP-ED, second largest PES) despite the 10 new member states.

The estimated votes by EU party are as follows:

The notional results by EU party as at 8 January 2007 are as follows:

4. The EUDemocrats
EUDemocrats
The EUDemocrats – Alliance for a Europe of Democracies – is a eurorealist alliance of parties and movements from 15 European countries. It operates as a transnational party at a European level , according to Regulation No 2004/2003...
, while having a preference for the IND/DEM
Independence and Democracy
The Independence/Democracy Group in the European Parliament was a group of eurosceptic and eurorealist political parties in the 2004-2009 term of the European Parliament. It collapsed following the 2009 European elections after losing many of its MEPs....
group, is currently split between UEN and IND/DEM.
5. In addition to the majority of AIDE MEPs which sit in the IND/DEM group, AIDE also includes Non-Inscrit
Non-Inscrits
Non-Inscrits are Members of the European Parliament who do not sit in one of the recognized political groups....
MEP, Jim Allister
Jim Allister
James Hugh "Jim" Allister, QC is a Northern Ireland Unionist politician and senior barrister. He is the leader of the Traditional Unionist Voice political party, serving as MLA in the Northern Ireland Assembly, where he represents Antrim North.He was formerly a member of the Democratic Unionist...
, as an individual member.

8. These figures include parties listed on the Euronat
Euronat
EuroNat is an organisation of European nationalist political parties, formed initially at the congress of the French National Front in Strasbourg on 30 March 1997. It had a loose organisational structure, and was in practice based on coordination by activities of the FN...
page which appear to have links with Euronat short of full membership.

Gibraltar participated as a result of the judgement in Matthews v. United Kingdom


Political group reshuffle after the 2004 election 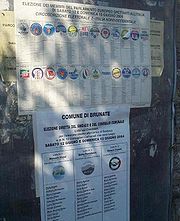 The elections coincided with legislative elections in Luxembourg
Luxembourgian legislative election, 2004
Legislative elections were held in Luxembourg on 13 June 2004. Voters elected all 60 members of the Grand Duchy's unicameral legislature, the Chamber of Deputies...
and presidential elections in Lithuania
Lithuanian presidential election, 2004
Presidential elections were held in Lithuania in June 2004. In the first round on 13 June, the former President, Valdas Adamkus, led the former Prime Minister Kazimira Prunskienė. Adamkus won Prunskienė in the second round on 27 June....
. They also coincided with local and regional elections in England and Wales, Irish local elections, regional elections in Belgium
Belgian regional elections, 2004
On June 13, 2004, regional elections were held in Belgium, to choose representatives in the regional councils of the Flemish Parliament, the Walloon Parliament, the Brussels Parliament and the German-speaking Community of Belgium...
, local or regional elections in most of Italy
Italy
Italy , officially the Italian Republic languages]] under the European Charter for Regional or Minority Languages. In each of these, Italy's official name is as follows:;;;;;;;;), is a unitary parliamentary republic in South-Central Europe. To the north it borders France, Switzerland, Austria and...
, and state parliament elections in the German
Germany
Germany , officially the Federal Republic of Germany , is a federal parliamentary republic in Europe. The country consists of 16 states while the capital and largest city is Berlin. Germany covers an area of 357,021 km2 and has a largely temperate seasonal climate...
state of Thuringia
Thuringia
The Free State of Thuringia is a state of Germany, located in the central part of the country.It has an area of and 2.29 million inhabitants, making it the sixth smallest by area and the fifth smallest by population of Germany's sixteen states....
.