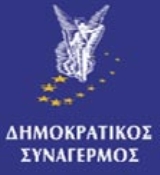 Encyclopedia
The Democratic Rally is a centre-right political party in Cyprus
Cyprus
Cyprus , officially the Republic of Cyprus , is a Eurasian island country, member of the European Union, in the Eastern Mediterranean, east of Greece, south of Turkey, west of Syria and north of Egypt. It is the third largest island in the Mediterranean Sea.The earliest known human activity on the...
, led by Nicos Anastasiades
Nicos Anastasiades
Nicos Anastasiades is a Cypriot politician who is the political leader of the centre-right political party DISY . In parliamentary elections on May 22, 2011, the Democratic Rally won 20 seats, which was more than any other party but not a majority of the 56-member House of...
.

The party was founded on 4 July 1976 by veteran politician Glafkos Klerides
Glafkos Klerides
Glafcos Ioannou Clerides is a Greek-Cypriot politician and the fourth President of the Republic of Cyprus.Clerides was the eldest son of the lawyer and statesman Ioannis Clerides....
. Clerides served as Cyprus president from 1993 until 2003.

The leaders of Democratic Rally supported the Annan Plan
Annan Plan for Cyprus
The Annan Plan was a United Nations proposal to resolve the Cyprus dispute, reuniting the breakaway Northern Cyprus with the Republic of Cyprus. The proposal was to restructure Cyprus as the "United Cyprus Republic", which would be a federation of two states. It was revised a number of times before...
for the re-unification of Cyprus. Following the rejection by the Greek Cypriot
Greek Cypriots
Greek Cypriots are the ethnic Greek population of Cyprus, forming the island's largest ethnolinguistic community at 77% of the population. Greek Cypriots are mostly members of the Church of Cyprus, an autocephalous Greek Orthodox Church within the wider communion of Orthodox Christianity...
Community, four MPs (Sillouris, Prodromou, Erotokritou, Taramoundas) who had opposed the party line were expelled and a number of members willingly resigned. The expelled MPs formed a party called European Democracy. In 2005 European Democracy merged with New Horizons
New Horizons (Cyprus)
The New Horizons was a political party in Cyprus.At the legislative elections, 27 May 2001, the party won 3.0 % of the popular vote and 1 out of 56 seats. In 2005, the party merged with politicians from Evropaiki Dimokratia to form Evropaiko Komma....
and created European Party
European Party (Cyprus)
The European Party is a centrist political party in Cyprus founded in 2005, largely out of the parties New Horizons and European Democracy....
. Former party president Yiannakis Matsis
Yiannakis Matsis
Yiannakis Matsis is a Cypriot politician and was Member of the European Parliament for the European People's Party from June 14, 2004 until June 2009. He didn't stand for re-election in the European elections, 2009.-References:...
headed a splinter coalition For Europe
For Europe (Cyprus)
European Democracy was a political party in Cyprus founded in 2004 out of the coalition For Europe....
in the European Parliamentary Election. Matsis gained a seat in the European parliament, also joining the EPP group (he is still a member of DISY).