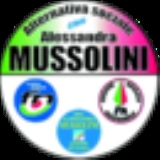 Encyclopedia
Alternativa Sociale was a coalition
Coalition
A coalition is a pact or treaty among individuals or groups, during which they cooperate in joint action, each in their own self-interest, joining forces together for a common cause. This alliance may be temporary or a matter of convenience. A coalition thus differs from a more formal covenant...
of political parties in Italy.

In the 2006 Italian general elections
Italian general election, 2006
In the Italian general election, 2006 for the renewal of the two Chambers of the Parliament of Italy held on April 9 and April 10, 2006 the incumbent prime minister Silvio Berlusconi, leader of the center-right House of Freedoms, was narrowly defeated by Romano Prodi, leader of the center-left The...
the coalition was a member of the defeated House of Freedoms
House of Freedoms
The House of Freedoms , was a major Italian centre-right political and electoral alliance led by Silvio Berlusconi. It was initially composed of several political parties:*Forza Italia *National Alliance...
and won no seats. The alliance was disbanded in late 2006 and replace by a new pact between Social Action, New Force, the Social Idea Movement
Social Idea Movement
Social Idea Movement is an Italian neo-fascist political party.It was founded in 2004 by a split of the Tricolour Flame party...
and the National Volunteers.