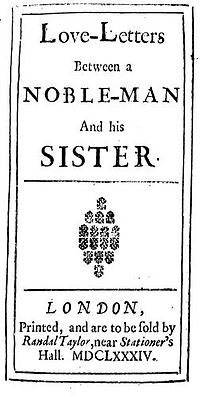 An epistolary novel is a novel
Novel
A novel is a book of long narrative in literary prose. The genre has historical roots both in the fields of the medieval and early modern romance and in the tradition of the novella. The latter supplied the present generic term in the late 18th century....
written as a series of documents. The usual form is letters, although diary entries
Diary
A diary is a record with discrete entries arranged by date reporting on what has happened over the course of a day or other period. A personal diary may include a person's experiences, and/or thoughts or feelings, including comment on current events outside the writer's direct experience. Someone...
, newspaper
Newspaper
A newspaper is a scheduled publication containing news of current events, informative articles, diverse features and advertising. It usually is printed on relatively inexpensive, low-grade paper such as newsprint. By 2007, there were 6580 daily newspapers in the world selling 395 million copies a...
clippings and other documents are sometimes used. Recently, electronic "documents" such as recordings and radio, blogs, and e-mails have also come into use. The word epistolary is derived through Latin
Latin
Latin is an Italic language originally spoken in Latium and Ancient Rome. It, along with most European languages, is a descendant of the ancient Proto-Indo-European language. Although it is considered a dead language, a number of scholars and members of the Christian clergy speak it fluently, and...
from the Greek
Greek language
Greek is an independent branch of the Indo-European family of languages. Native to the southern Balkans, it has the longest documented history of any Indo-European language, spanning 34 centuries of written records. Its writing system has been the Greek alphabet for the majority of its history;...
word ἐπιστολή epistolē, meaning a letter (see epistle
Epistle
An epistle is a writing directed or sent to a person or group of people, usually an elegant and formal didactic letter. The epistle genre of letter-writing was common in ancient Egypt as part of the scribal-school writing curriculum. The letters in the New Testament from Apostles to Christians...
).

The epistolary form can add greater realism
Realism (arts)
Realism in the visual arts and literature refers to the general attempt to depict subjects "in accordance with secular, empirical rules", as they are considered to exist in third person objective reality, without embellishment or interpretation...
to a story, because it mimics the workings of real life. It is thus able to demonstrate differing points of view without recourse to the device of an omniscient narrator.

There are two theories on the genesis of the epistolary novel. The first claims that the genre originated from novels with inserted letters, in which the portion containing the third person narrative in between the letters was gradually reduced. The other theory claims that the epistolary novel arose from miscellanies of letters and poetry: some of the letters were tied together into a (mostly amorous) plot. Both claims have some validity. The first truly epistolary novel, the Spanish "Prison of Love" (Cárcel de amor) (c.1485) by Diego de San Pedro, belongs to a tradition of novels in which a large number of inserted letters already dominated the narrative. Other well-known examples of early epistolary novels are closely related to the tradition of letter-books and miscellanies of letters. Within the successive editions of Edmé Boursault
Edmé Boursault
Edmé Boursault was a French dramatist and miscellaneous writer, born at Mussy l'Evéque, now Mussy-sur-Seine ....
's Letters of Respect, Gratitude and Love (Lettres de respect, d'obligation et d 'amour) (1669), a group of letters written to a girl named Babet was expanded and became more and more distinct from the other letters, until it formed a small epistolary novel entitled Letters to Babet (Lettres à Babet). The immensely famous Letters of a Portuguese Nun
Letters of a Portuguese Nun
The Letters of a Portuguese Nun , first published anonymously by Claude Barbin in Paris in 1669, is a work believed by most scholars to be epistolary fiction in the form of five letters written by Gabriel-Joseph de La Vergne, comte de Guilleragues , a minor peer, diplomat, secretary to the Prince...
(Lettres portugaises) (1669) generally attributed to Gabriel-Joseph de La Vergne, comte de Guilleragues, though a small minority still regard Marianna Alcoforado
Marianna Alcoforado
Sóror Mariana Alcoforado , was a Portuguese nun, living in the convent of the Poor Ladies in Beja, Portugal....
as the author, is claimed to be intended to be part of a miscellany of Guilleragues prose and poetry.
The founder of the epistolary novel in English is said by many to be James Howell (1594–1666) with "Familiar Letters", who writes of prison, foreign adventure, and the love of women.

Starting in the 18th century, the epistolary form was subject to much ridicule, resulting in a number of savage burlesques. The most notable example of these was Henry Fielding
Henry Fielding
Henry Fielding was an English novelist and dramatist known for his rich earthy humour and satirical prowess, and as the author of the novel Tom Jones....
's Shamela (1741), written as a parody of Pamela. In it, the female narrator can be found wielding a pen and scribbling her diary entries under the most dramatic and unlikely of circumstances.

The epistolary novel slowly fell out of use in the late 18th century. Although Jane Austen
Jane Austen
Jane Austen was an English novelist whose works of romantic fiction, set among the landed gentry, earned her a place as one of the most widely read writers in English literature, her realism and biting social commentary cementing her historical importance among scholars and critics.Austen lived...
tried her hand at the epistolary in juvenile writings and her novella
Novella
A novella is a written, fictional, prose narrative usually longer than a novelette but shorter than a novel. The Science Fiction and Fantasy Writers of America Nebula Awards for science fiction define the novella as having a word count between 17,500 and 40,000...
Lady Susan, she abandoned this structure for her later work. It is thought that her lost novel "First Impressions", which was redrafted to become Pride and Prejudice
Pride and Prejudice
Pride and Prejudice is a novel by Jane Austen, first published in 1813. The story follows the main character Elizabeth Bennet as she deals with issues of manners, upbringing, morality, education and marriage in the society of the landed gentry of early 19th-century England...
, may have been epistolary: Pride and Prejudice contains an unusual number of letters quoted in full and some play a critical role in the plot.

The epistolary form nonetheless saw continued use, surviving in exceptions or in fragments in nineteenth-century novels. In Honoré de Balzac
Honoré de Balzac
Honoré de Balzac was a French novelist and playwright. His magnum opus was a sequence of short stories and novels collectively entitled La Comédie humaine, which presents a panorama of French life in the years after the 1815 fall of Napoleon....
's novel Letters of Two Brides, two women who became friends during their education at a convent correspond over a 17 year period, exchanging letters describing their lives. Mary Shelley
Mary Shelley
Mary Shelley was a British novelist, short story writer, dramatist, essayist, biographer, and travel writer, best known for her Gothic novel Frankenstein: or, The Modern Prometheus . She also edited and promoted the works of her husband, the Romantic poet and philosopher Percy Bysshe Shelley...
employs the epistolary form in her novel Frankenstein
Frankenstein
Frankenstein; or, The Modern Prometheus is a novel about a failed experiment that produced a monster, written by Mary Shelley, with inserts of poems by Percy Bysshe Shelley. Shelley started writing the story when she was eighteen, and the novel was published when she was twenty-one. The first...
(1818). Shelley uses the letters as one of a variety of framing devices, as the story is presented through the letters of a sea captain and scientific explorer attempting to reach the north pole who encounters Victor Frankenstein and records the dying man's narrative and confessions. In the late 19th century, Bram Stoker
Bram Stoker
Abraham "Bram" Stoker was an Irish novelist and short story writer, best known today for his 1897 Gothic novel Dracula...
released one of the most widely recognized and successful novels in the epistolary form to date, Dracula
Dracula
Dracula is an 1897 novel by Irish author Bram Stoker.Famous for introducing the character of the vampire Count Dracula, the novel tells the story of Dracula's attempt to relocate from Transylvania to England, and the battle between Dracula and a small group of men and women led by Professor...
. Printed in 1897, the novel is compiled entirely of letters, diary entries, newspaper clippings, telegrams, doctor's notes, ship's logs, and the like, which Stoker adroitly employs to balance believability and dramatic tension.

There are three types of epistolary novels: monologic (giving the letters of only one character, like Letters of a Portuguese Nun), dialogic (giving the letters of two characters, like Mme Marie Jeanne Riccoboni
Marie Jeanne Riccoboni
Marie-Jeanne Riccoboni , whose maiden name was Laboras de Mezières, was a French novelist.She was born in Paris in 1714.In 1735 she married Antoine François Riccoboni, a comedian and dramatist, from whom she soon separated...
's Letters of Fanni Butlerd (1757), and polylogic (with three or more letter-writing characters). In addition, a crucial element in polylogic epistolary novels like Clarissa, and Dangerous Liaisons is the dramatic device of 'discrepant awareness': the simultaneous but separate correspondences of the heroines and the villains creating dramatic tension.