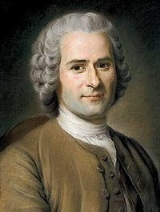 Overview
Jean-Jacques Rousseau was a Geneva
Geneva
Geneva In the national languages of Switzerland the city is known as Genf , Ginevra and Genevra is the second-most-populous city in Switzerland and is the most populous city of Romandie, the French-speaking part of Switzerland...
n philosopher, writer, and composer of 18th-century Romanticism
Romanticism
Romanticism was an artistic, literary and intellectual movement that originated in the second half of the 18th century in Europe, and gained strength in reaction to the Industrial Revolution...
. His political philosophy
Political philosophy
Political philosophy is the study of such topics as liberty, justice, property, rights, law, and the enforcement of a legal code by authority: what they are, why they are needed, what, if anything, makes a government legitimate, what rights and freedoms it should protect and why, what form it...
influenced the French Revolution
French Revolution
The French Revolution , sometimes distinguished as the 'Great French Revolution' , was a period of radical social and political upheaval in France and Europe. The absolute monarchy that had ruled France for centuries collapsed in three years...
as well as the overall development of modern political, sociological and educational thought.

His novel Émile: or, On Education
Emile: Or, On Education
Émile, or On Education is a treatise on the nature of education and on the nature of man written by Jean-Jacques Rousseau, who considered it to be the “best and most important of all my writings”. Due to a section of the book entitled “Profession of Faith of the Savoyard Vicar,” Émile was be...
is a treatise on the education of the whole person for citizenship. His sentimental novel
Sentimental novel
The sentimental novel or the novel of sensibility is an 18th century literary genre which celebrates the emotional and intellectual concepts of sentiment, sentimentalism, and sensibility...
Julie, ou la nouvelle Héloïse
Julie, ou la nouvelle Héloïse
Julie, or the New Héloïse is an epistolary novel by Jean-Jacques Rousseau, published in 1761 by Marc-Michel Rey in . The original edition was entitled Lettres de deux amans habitans d'une petite ville au pied des Alpes .The novel’s subtitle points to the history of Héloïse d’Argenteuil and Pierre...
was of importance to the development of pre-romanticism and romanticism
Romanticism
Romanticism was an artistic, literary and intellectual movement that originated in the second half of the 18th century in Europe, and gained strength in reaction to the Industrial Revolution...
in fiction. Rousseau's autobiographical writings — his Confessions
Confessions (Jean-Jacques Rousseau)
Confessions is an autobiographical book by Jean-Jacques Rousseau. In modern times, it is often published with the title The Confessions of Jean-Jacques Rousseau in order to distinguish it from St. Augustine of Hippo's Confessions...
, which initiated the modern autobiography, and his Reveries of a Solitary Walker
Reveries of a Solitary Walker
Reveries of a Solitary Walker is an unfinished book by Genevan philosopher Jean-Jacques Rousseau, written between 1776 and 1778. It was the last of a number of works composed toward the end of his life which were deeply autobiographical in nature...
— exemplified the late 18th-century movement known as the Age of Sensibility, featuring an increasing focus on subjectivity and introspection that has characterized the modern age.

All that time is lost which might be better employed.

As quoted in A Dictionary of Quotations in Most Frequent Use: Taken Chiefly from the Latin and French, but comprising many from the Greek, Spanish, and Italian Languages, translated into English (1809) by David Evans Macdonnel

Accent is the soul of language; it gives to it both feeling and truth.

As quoted in A Dictionary of Thoughts: Being a Cyclopedia of Laconic Quotations from the Best Authors of the World, Both Ancient and Modern (1908) by Tryon Edwards, p. 277

A country cannot subsist well without liberty, nor liberty without virtue.

As quoted in A Dictionary of Thoughts: Being a Cyclopedia of Laconic Quotations from the Best Authors of the World, Both Ancient and Modern (1908) by Tryon Edwards, p. 301

Never exceed your rights, and they will soon become unlimited.

Money is the seed of money, and the first guinea is sometimes more difficult to acquire than the second million.