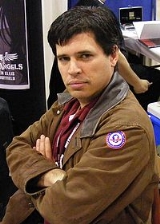 Encyclopedia
Maximillian Michael "Max" Brooks (born May 22, 1972) is an American author
Author
An author is broadly defined as "the person who originates or gives existence to anything" and that authorship determines responsibility for what is created. Narrowly defined, an author is the originator of any written work.-Legal significance:...
and screenwriter
Screenwriter
Screenwriters or scriptwriters or scenario writers are people who write/create the short or feature-length screenplays from which mass media such as films, television programs, Comics or video games are based.-Profession:...
, with a particular interest in zombie
Zombie
Zombie is a term used to denote an animated corpse brought back to life by mystical means such as witchcraft. The term is often figuratively applied to describe a hypnotized person bereft of consciousness and self-awareness, yet ambulant and able to respond to surrounding stimuli...
s. Brooks is also a television and voice-over
Voice-over
Voice-over is a production technique where a voice which is not part of the narrative is used in a radio, television production, filmmaking, theatre, or other presentations...
actor.

Brooks was born in New York City
New York City
New York is the most populous city in the United States and the center of the New York Metropolitan Area, one of the most populous metropolitan areas in the world. New York exerts a significant impact upon global commerce, finance, media, art, fashion, research, technology, education, and...
, the son of the Jewish American director, producer, writer, and actor Mel Brooks
Mel Brooks
Mel Brooks is an American film director, screenwriter, composer, lyricist, comedian, actor and producer. He is best known as a creator of broad film farces and comic parodies. He began his career as a stand-up comic and as a writer for the early TV variety show Your Show of Shows...
and Italian American
Italian American
An Italian American , is an American of Italian ancestry. The designation may also refer to someone possessing Italian and American dual citizenship...
actress Anne Bancroft
Anne Bancroft
Anne Bancroft was an American actress associated with the Method acting school, which she had studied under Lee Strasberg....
.

Brooks' book World War Z: An Oral History of the Zombie War
World War Z
World War Z: An Oral History of the Zombie War is a 2006 post-apocalyptic horror novel by Max Brooks. It is a follow-up to his 2003 book The Zombie Survival Guide. Rather than a grand overview or narrative, World War Z is a collection of individual accounts in the form of first-person anecdote...
, which deals with the war between the human race and zombies, was released on September 12, 2006. Paramount Pictures has acquired the movie rights; Brad Pitt
Brad Pitt
William Bradley "Brad" Pitt is an American actor and film producer. Pitt has received two Academy Award nominations and four Golden Globe Award nominations, winning one...
's production company Plan B Entertainment
Plan B Entertainment
Plan B Entertainment is a film production company founded by Brad Pitt, Brad Grey, and Jennifer Aniston. In 2006, Pitt became the sole owner; the company currently holds a release deal with Paramount Pictures, along with Warner Bros...
will produce the film. In the October 2006 issue of Fangoria Magazine, Brooks stated that he will not be writing the screenplay for the motion picture, as he feels he is not an accomplished enough screenwriter to "do it right" (J. Michael Straczynski
J. Michael Straczynski
Joseph Michael Straczynski , known professionally as J. Michael Straczynski and informally as Joe Straczynski or JMS, is an American writer and television producer. He works in films, television series, novels, short stories, comic books, and radio dramas. He is a playwright, a former journalist,...
is writing the screenplay).

In 2010, Brooks wrote the IDW
IDW Publishing
IDW Publishing, also known as Idea + Design Works, LLC and IDW, is an American publisher of comic books and comic strip collections. The company was founded in 1999 and has been awarded the title "Publisher of the Year Under 5% Market Share" for the years 2004, 2005 and 2006 by Diamond Comic...
comic book mini-series G.I. Joe: Hearts & Minds
G.I. Joe (IDW Publishing)
G.I. Joe is a comic book series by IDW Publishing, based upon Hasbro's G.I. Joe characters and toy line.The series is marketed as three ongoing series , two mini-series and a small series of one-shots...
.

Brooks has a number of other creative credits. As an actor, he has been seen in Roseanne
Roseanne (TV series)
Roseanne is an American sitcom broadcast on ABC from October 18, 1988 to May 20, 1997. Starring Roseanne Barr, the show revolved around the Conners, an Illinois working class family...
, To Be or Not to Be
To Be or Not to Be (1983 film)
To Be or Not to Be is a 1983 20th Century Fox comedy-drama film directed by Alan Johnson, produced by Mel Brooks with Howard Jeffrey as executive producer and Irene Walzer as associate producer. The screenplay was written by Ronny Graham and Thomas Meehan, based on the original story by Melchior...
, Pacific Blue
Pacific Blue (TV series)
Pacific Blue is an American crime drama series about a team of police officers with the Santa Monica Police Department who patrolled its beaches on bicycles. The show ran for five seasons on the USA Network, from March 2, 1996 to April 9, 2000, with a total of one hundred and one episodes...
, and 7th Heaven
7th Heaven
7th Heaven is an American family drama television series, created and produced by Brenda Hampton. The series premiered on August 26, 1996, on the WB, the first time that the network aired Monday night programming, and was originally broadcast from August 26, 1996 to May 13, 2007...
. He also has a career voicing animation; his voice has been featured in the animated shows Batman Beyond
Batman Beyond
Batman Beyond is an American animated television series created by Warner Bros. Animation in collaboration with DC Comics as a continuation of the Batman legacy...
, Buzz Lightyear of Star Command
Buzz Lightyear of Star Command
Buzz Lightyear of Star Command is an American animated science fiction/adventure/comedy series produced by Walt Disney Television. The character is from the planet Zurtron. The series originally aired on UPN and ABC from October 2000 to January 2001 as part of Disney's One Saturday Morning...
, and Justice League
Justice League (TV series)
Justice League is an American animated television series about a team of superheroes which ran from 2001 to 2004 on Cartoon Network. The show was produced by Warner Bros. Animation. It is based on the Justice League of America and associated comic book characters published by DC Comics...
. During the start of the 3rd season of Lost Tapes
Lost Tapes
Lost Tapes is an American horror/thriller docudrama television series that airs on Animal Planet. Produced by Go Go Luckey Entertainment, the program presents fictional found footage depicting traumatic encounters with cryptozoological creatures , including the Chupacabra and Bigfoot, and even...
, he was cast as himself in the zombie episode, telling the audience about how zombies come to be. He also appeared on Spike TV series "Deadliest Warrior
Deadliest Warrior
Deadliest Warrior is a television program in which information on historical or modern warriors and their weapons are used to determine which of them is the "deadliest" based upon tests performed during each episode...
", in which he represented the zombie team in the "Vampires vs Zombies" episode, as one of the Zombie experts along with Matt Mogk the Founder of the Zombie Research Society.