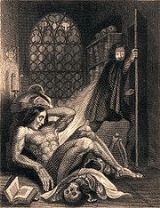 Overview
Frankenstein; or, The Modern Prometheus is a novel
Novel
A novel is a book of long narrative in literary prose. The genre has historical roots both in the fields of the medieval and early modern romance and in the tradition of the novella. The latter supplied the present generic term in the late 18th century....
about a failed experiment that produced a monster
Monster
A monster is any fictional creature, usually found in legends or horror fiction, that is somewhat hideous and may produce physical harm or mental fear by either its appearance or its actions...
, written by Mary Shelley
Mary Shelley
Mary Shelley was a British novelist, short story writer, dramatist, essayist, biographer, and travel writer, best known for her Gothic novel Frankenstein: or, The Modern Prometheus . She also edited and promoted the works of her husband, the Romantic poet and philosopher Percy Bysshe Shelley...
, with inserts of poems by Percy Bysshe Shelley
Percy Bysshe Shelley
Percy Bysshe Shelley was one of the major English Romantic poets and is critically regarded as among the finest lyric poets in the English language. Shelley was famous for his association with John Keats and Lord Byron...
. Shelley started writing the story when she was eighteen, and the novel was published when she was twenty-one. The first edition was published anonymously in London in 1818. Shelley's name appears on the second edition, published in France in 1823.

Shelley had travelled the region in which the story takes place, and the topics of galvanism
Galvanism
In biology, galvanism is the contraction of a muscle that is stimulated by an electric current. In physics and chemistry, it is the induction of electrical current from a chemical reaction, typically between two chemicals with differing electronegativities....
and other similar occult ideas were themes of conversation among her companions, particularly her future husband, Percy.

What are the consequences of the loss of "conectedness" and relationships between and among human beings in the book, Frankenstein?

What is the value of technology and invention?

What are consequences of the arrogance of the "intelligent persons", especially the scientist in the book, Frankenstein?
More

"You seek for knowledge and wisdom, as I once did; and I ardently hope that the gratification of your wishes may not be a serpent to sting you, as mine has been." (Letter IV, August 19th 17-)

"With the confusion of ideas only to be accounted for by my extreme youth and my want of a guide on such matters, I had re-trod the steps of knowledge along the paths of time and exchanged the discoveries of recent inquirers for the dreams of forgotten alchemists." (Ch. 3)

"Life and death appeared to me ideal bounds, which I should first break through, and pour a torrent of light into our dark world." (Ch. 4 pg.40)

"The moon gazed on my midnight Eggan, while, with unrelaxed and breathless eagerness, I pursued nature to her hiding-places." (Ch. 4 pg 40)

"How dangerous is the acquirement of knowledge, and how much happier that man is who believes his native town to be the world, than he who aspires to become greater than his nature will allow.” (Ch. 4 pg. 34)

"It was already one in the morning; the rain pattered dismally against the panes, and my candle was nearly burnt out, when, by the glimmer of the half-extinguished light, I saw the dull yellow eye of the creature open..." (Ch. 5 pg 43)

"For this I had deprived myself of rest and health. I had desired it with an ardour that far exceeded moderation; but now that I had finished, the beauty of the dream vanished, and breathless horror and disgust filled my heart." (Ch. 5 pg 43)

"I had begun life with benevolent intentions and thirsted for the moment when I should put them in practice and make myself useful to my fellow beings." (Ch. 9)

"A sense of security, a feeling that a truce was established between the present hour and the irresistible, disastrous future imparted to me a kind of calm forgetfulness, of which the human mind is by its structure peculiarly susceptible." (Ch. 21)

"Great God! If for one instant I had thought what might be the hellish intention of my fiendish adversary, I would rather have banished myself forever from my native country and wandered a friendless outcast over the earth than have consented to this miserable marriage. But, as if possessed of magic powers, the monster had blinded me to his real intentions; and when I thought that I had prepared only my own death, I hastened that of a far dearer victim." (Ch. 22)