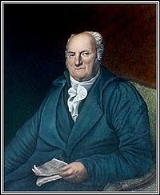 Elias Boudinot was born in Philadelphia
Philadelphia, Pennsylvania
Philadelphia is the largest city in the Commonwealth of Pennsylvania and the county seat of Philadelphia County, with which it is coterminous. The city is located in the Northeastern United States along the Delaware and Schuylkill rivers. It is the fifth-most-populous city in the United States,...
on May 2, 1740. His father, Elias Boudinot III, was a silversmith; he was a neighbor and friend of Benjamin Franklin
Benjamin Franklin
Dr. Benjamin Franklin was one of the Founding Fathers of the United States. A noted polymath, Franklin was a leading author, printer, political theorist, politician, postmaster, scientist, musician, inventor, satirist, civic activist, statesman, and diplomat...
. His mother, Mary Catherine Williams, was from the British West Indies
British West Indies
The British West Indies was a term used to describe the islands in and around the Caribbean that were part of the British Empire The term was sometimes used to include British Honduras and British Guiana, even though these territories are not geographically part of the Caribbean...
; her father was from Wales
Wales
Wales is a country that is part of the United Kingdom and the island of Great Britain, bordered by England to its east and the Atlantic Ocean and Irish Sea to its west. It has a population of three million, and a total area of 20,779 km²...
. Elias' paternal grandfather, Elie (sometimes called Elias) Boudinot, was the son of Jean Boudinot and Marie Suire of Marans, Aunis, France
France
The French Republic , The French Republic , The French Republic , (commonly known as France , is a unitary semi-presidential republic in Western Europe with several overseas territories and islands located on other continents and in the Indian, Pacific, and Atlantic oceans. Metropolitan France...
. They were a Huguenot
Huguenot
The Huguenots were members of the Protestant Reformed Church of France during the 16th and 17th centuries. Since the 17th century, people who formerly would have been called Huguenots have instead simply been called French Protestants, a title suggested by their German co-religionists, the...
(French Protestant) family who fled to New York about 1687 to avoid the religious persecutions of King Louis XIV
Louis XIV of France
Louis XIV , known as Louis the Great or the Sun King , was a Bourbon monarch who ruled as King of France and Navarre. His reign, from 1643 to his death in 1715, began at the age of four and lasted seventy-two years, three months, and eighteen days...
. Mary Catherine Williams and Elias Boudinot, Sr. were married on Aug 8, 1729. Over the next twenty years, they had nine children. The first, John, was born in the British West Indies-Antigua. Of the others, only the younger Elias and his siblings Annis, Mary, and Elisha reached adulthood. Elisha Boudinot became Chief Justice of the Supreme Court of New Jersey.

After studying and being tutored at home, Elias Boudinot went to Princeton, New Jersey
Princeton, New Jersey
Princeton is a community located in Mercer County, New Jersey, United States. It is best known as the location of Princeton University, which has been sited in the community since 1756...
to read the law with another attorney. His mentor was Richard Stockton
Richard Stockton (1730-1781)
Richard Stockton was an American lawyer, jurist, legislator, and a signer of the Declaration of Independence.-Early life:...
, who later signed the Declaration of Independence
United States Declaration of Independence
The Declaration of Independence was a statement adopted by the Continental Congress on July 4, 1776, which announced that the thirteen American colonies then at war with Great Britain regarded themselves as independent states, and no longer a part of the British Empire. John Adams put forth a...
, and was married to Elias's sister Annis Boudinot
Annis Boudinot Stockton
Annis Boudinot Stockton was an American poet.Stockton was born in Darby, Pennsylvania, to Elias Boudinot, merchant and silversmith, and Catherine Williams. Annis was also known as the Duchess of Morven—their estate in Princeton, New Jersey was named Morven, after the legendary Scottish King...
.

In his later years, Boudinot invested and speculated in land. He owned large tracts in Ohio
Ohio
Ohio is a Midwestern state in the United States. The 34th largest state by area in the U.S.,it is the 7th‑most populous with over 11.5 million residents, containing several major American cities and seven metropolitan areas with populations of 500,000 or more.The state's capital is Columbus...
including most of Green Township
Green Township, Hamilton County, Ohio
Green Township is one of the twelve townships of Hamilton County, Ohio, United States. The 2000 census found 55,660 people in the township.-Geography:Located in the west central part of the county, it borders the following townships and city:...
in what is now the western suburbs of Cincinnati
Cincinnati, Ohio
Cincinnati is a city in the U.S. state of Ohio. Cincinnati is the county seat of Hamilton County. Settled in 1788, the city is located to north of the Ohio River at the Ohio-Kentucky border, near Indiana. The population within city limits is 296,943 according to the 2010 census, making it Ohio's...
. On his death, he willed 13000 acres (52.6 km²) to the city of Philadelphia for parks and city needs.

Boudinot became a prominent lawyer and his practice prospered, As the revolution drew near, he aligned with the Whigs
Radical Whigs
The Radical Whigs were "a group of British political commentators" associated with the British Whig faction who were at the forefront of Radicalism...
, and was elected to the New Jersey provincial assembly in 1775. In the early stages of the Revolutionary War
American Revolutionary War
The American Revolutionary War , the American War of Independence, or simply the Revolutionary War, began as a war between the Kingdom of Great Britain and thirteen British colonies in North America, and ended in a global war between several European great powers.The war was the result of the...
, he was active in promoting enlistment and several times loaned money to field commanders for supplies. Elias also became one of the focal points for rebel spies, who were sent to Staten Island and Long Island to observe and report on movements of specific British garrisons and regiments.

On May 5, 1777, General George Washington
George Washington
George Washington was the dominant military and political leader of the new United States of America from 1775 to 1799. He led the American victory over Great Britain in the American Revolutionary War as commander-in-chief of the Continental Army from 1775 to 1783, and presided over the writing of...
asked for him to be made commissary general for prisoners. Congress through the board of war concurred. Boudinot was made a colonel in the Continental Army
Continental Army
The Continental Army was formed after the outbreak of the American Revolutionary War by the colonies that became the United States of America. Established by a resolution of the Continental Congress on June 14, 1775, it was created to coordinate the military efforts of the Thirteen Colonies in...
for this task. He held this job until other responsibilities force him to resign in July of 1778. The commissary was responsible not just for enemy prisoners, but for supplying American prisoners  held by the British.

When the United States government was formed in 1789, New Jersey sent Boudinot to the House of Representatives
United States House of Representatives
The United States House of Representatives is one of the two Houses of the United States Congress, the bicameral legislature which also includes the Senate.The composition and powers of the House are established in Article One of the Constitution...
. He was elected to the second and third congresses as well, where he generally supported the administration, but refused to join the growing forces that led to formal political parties. In 1794, he declined to serve another term, and left Congress in early 1795. In October of 1795, President Washington appointed him the Director of the United States Mint
United States Mint
The United States Mint primarily produces circulating coinage for the United States to conduct its trade and commerce. The Mint was created by Congress with the Coinage Act of 1792, and placed within the Department of State...
, a position he held until his retirement in 1805. After many turbulent decades in law and politics, he was to recall the metallurgic skill learned in his father's silversmith
Silversmith
A silversmith is a craftsperson who makes objects from silver or gold. The terms 'silversmith' and 'goldsmith' are not synonyms as the techniques, training, history, and guilds are or were largely the same but the end product varies greatly as does the scale of objects created.Silversmithing is the...
y. He was scrupulous in his accounting, as reported to Congress, and left the US Mint in excellent order for the future.

In addition to serving in political office, Elias supported many civic, religious, and educational causes during his life. In Revolutionary times, Princeton was the College of New Jersey, and Boudinot served as one of its trustees for nearly half a century, from 1772 until 1821. When the Continental Congress was forced to leave Philadelphia in 1783 while he was its president, he moved the meetings to Princeton
Princeton, New Jersey
Princeton is a community located in Mercer County, New Jersey, United States. It is best known as the location of Princeton University, which has been sited in the community since 1756...
, where they met in the University's Nassau Hall.

On Thursday, September 24, 1789, the first House of Representatives voted to recommend the First Amendment of the newly drafted Constitution to the states for ratification. The next day, Congressman Elias Boudinot from New Jersey proposed that the House and Senate jointly request of President Washington to proclaim a day of thanksgiving for “the many signal favors of Almighty God.” Boudinot said that he “could not think of letting the session pass over without offering an opportunity to all the citizens of the United States of joining, with one voice, in returning to Almighty God their sincere thanks for the many blessings he had poured down upon them.”
Quote from-The Annals of the Congress, The Debates and Proceedings in the Congress of the United States, Compiled From Authentic Materials by Joseph Gales, Senior (Washington, DC: Gales and Seaton, 1834), 1:949–950.

A devout Presbyterian, Boudinot supported missions and missionary work. He wrote The Age of Revelation in response to Thomas Paine's The Age of Reason. To that end, he was one of the founders of the American Bible Society, and served as its President after 1816. He argued for the rights of black and American Indian
Native Americans in the United States
Native Americans in the United States are the indigenous peoples in North America within the boundaries of the present-day continental United States, parts of Alaska, and the island state of Hawaii. They are composed of numerous, distinct tribes, states, and ethnic groups, many of which survive as...
citizens, and sponsored students to the Board School for Indians in Connecticut
Connecticut
Connecticut is a state in the New England region of the northeastern United States. It is bordered by Rhode Island to the east, Massachusetts to the north, and the state of New York to the west and the south .Connecticut is named for the Connecticut River, the major U.S. river that approximately...
. One of these, a young Cherokee named Gallegina Watie, stayed with him while traveling to the school. The two so impressed each other that Gallegina asked for and was given permission to use his name. He later was known as Elias Boudinot
Elias Boudinot (Cherokee)
Elias Boudinot , was a member of an important Cherokee family in present-day Georgia. They believed that rapid acculturation was critical to Cherokee survival. In 1828 Boudinot became the editor of the Cherokee Phoenix, which was published in Cherokee and English...
.