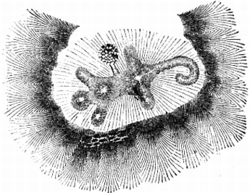 An effigy mound is a raised pile of earth built in the shape of a stylized animal, symbol, religious figure, or human figure. Effigy mounds were only built during the Late Woodland Period
Woodland period
The Woodland period of North American pre-Columbian cultures was from roughly 1000 BCE to 1000 CE in the eastern part of North America. The term "Woodland Period" was introduced in the 1930s as a generic header for prehistoric sites falling between the Archaic hunter-gatherers and the...
(AD 350-1300).

Effigy mounds were constructed in many Native American
Indigenous peoples of the Americas
The indigenous peoples of the Americas are the pre-Columbian inhabitants of North and South America, their descendants and other ethnic groups who are identified with those peoples. Indigenous peoples are known in Canada as Aboriginal peoples, and in the United States as Native Americans...
cultures. Scholars believe they were primarily for religious purposes, although some also fulfilled a burial mound
Tumulus
A tumulus is a mound of earth and stones raised over a grave or graves. Tumuli are also known as barrows, burial mounds, Hügelgrab or kurgans, and can be found throughout much of the world. A tumulus composed largely or entirely of stones is usually referred to as a cairn...
function. The builders of the effigy mounds are usually referred to as the Mound Builders. Native American societies in Wisconsin
Wisconsin
Wisconsin is a U.S. state located in the north-central United States and is part of the Midwest. It is bordered by Minnesota to the west, Iowa to the southwest, Illinois to the south, Lake Michigan to the east, Michigan to the northeast, and Lake Superior to the north. Wisconsin's capital is...
built more mounds than did those in any other region of North America
North America
North America is a continent wholly within the Northern Hemisphere and almost wholly within the Western Hemisphere. It is also considered a northern subcontinent of the Americas...
—between 15,000 and 20,000 mounds, at least 4,000 of which remain today.

Native North American effigy mounds have been compared to the large-scale effigy forms depicted in the Nazca Lines
Nazca Lines
The Nazca Lines are a series of ancient geoglyphs located in the Nazca Desert in southern Peru. They were designated a UNESCO World Heritage Site in 1994. The high, arid plateau stretches more than between the towns of Nazca and Palpa on the Pampas de Jumana about 400 km south of Lima...
of Peru
Peru
Peru , officially the Republic of Peru , is a country in western South America. It is bordered on the north by Ecuador and Colombia, on the east by Brazil, on the southeast by Bolivia, on the south by Chile, and on the west by the Pacific Ocean....
.

Effigy mounds may have been observed by the Spanish
Spain
Spain , officially the Kingdom of Spain languages]] under the European Charter for Regional or Minority Languages. In each of these, Spain's official name is as follows:;;;;;;), is a country and member state of the European Union located in southwestern Europe on the Iberian Peninsula...
during Hernando de Soto’s exploration of the North American continent between 1539 and 1543. This expedition discovered Indian mounds of varying shapes and sizes all over what is now the Southern and Central United States, stretching from Florida
Florida
Florida is a state in the southeastern United States, located on the nation's Atlantic and Gulf coasts. It is bordered to the west by the Gulf of Mexico, to the north by Alabama and Georgia and to the east by the Atlantic Ocean. With a population of 18,801,310 as measured by the 2010 census, it...
to Ohio
Ohio
Ohio is a Midwestern state in the United States. The 34th largest state by area in the U.S.,it is the 7th‑most populous with over 11.5 million residents, containing several major American cities and seven metropolitan areas with populations of 500,000 or more.The state's capital is Columbus...
to Texas
Texas
Texas is the second largest U.S. state by both area and population, and the largest state by area in the contiguous United States.The name, based on the Caddo word "Tejas" meaning "friends" or "allies", was applied by the Spanish to the Caddo themselves and to the region of their settlement in...
, but most likely did not travel far north enough to discover animal-shaped mounds. Effigy mounds are limited to the Northern and Eastern United States, and most likely the French
France
The French Republic , The French Republic , The French Republic , (commonly known as France , is a unitary semi-presidential republic in Western Europe with several overseas territories and islands located on other continents and in the Indian, Pacific, and Atlantic oceans. Metropolitan France...
were the first European
Europe
Europe is, by convention, one of the world's seven continents. Comprising the westernmost peninsula of Eurasia, Europe is generally 'divided' from Asia to its east by the watershed divides of the Ural and Caucasus Mountains, the Ural River, the Caspian and Black Seas, and the waterways connecting...
s to see them in their expeditions southward from Canada
Canada
Canada is a North American country consisting of ten provinces and three territories. Located in the northern part of the continent, it extends from the Atlantic Ocean in the east to the Pacific Ocean in the west, and northward into the Arctic Ocean...
after 1673.

Effigy mounds were not noticed as unusual until settlers began moving west from the British colonies on the eastern coast. From most vantage points, the mounds would appear to be normal geological formations; it was only when settlers began flattening the mounds to make room for crops that they were found to be of historical significance.

After the discovery of effigy mounds, and other mounds all over the country, wild theories began to be developed as to how and by whom they were built. The first theories were the most accurate; people in the late 17th century assumed that the mounds had been built by the Native American people who still lived in the vicinity. These logical assumptions lost popularity as more fantastic theories were developed. The most popular of these theories in the 18th century was that an extinct race of Mound Builder people had built the mounds and then vanished. This theory was laid to rest by archaeologists at the Smithsonian Institution
Smithsonian Institution
The Smithsonian Institution is an educational and research institute and associated museum complex, administered and funded by the government of the United States and by funds from its endowment, contributions, and profits from its retail operations, concessions, licensing activities, and magazines...
in the 1870s.

The Winnebago
Ho-Chunk
The Ho-Chunk, also known as Winnebago, are a tribe of Native Americans, native to what is now Wisconsin and Illinois. There are two federally recognized Ho-Chunk tribes, the Ho-Chunk Nation of Wisconsin and Winnebago Tribe of Nebraska....
suggest that effigy mounds were used as places of refuge, not of burial. Some archaeologists today believe that the mounds were built by particular clans or groups to honor their representative animal. Others believe that the mounds were burial sites for important figures, while still others believe that the mounds held some other religious significance. The mounds may also indicate hunting and gathering territories of different groups. Other evidence suggests that effigy mounds were used for all manner of rites and ceremonies, from birth ceremonies to funeral rites and everything in between. Research on the purpose of effigy mounds is still inconclusive.

Common shapes for effigy mounds include birds, bear, deer, bison, lynx, panther, turtles, and water spirits. These animals were most likely chosen for their particular religious or spiritual significance to the people who built each mound. Certain areas of effigy mound activity have types that are most likely to be found there.

Effigy mounds have been found to contain grave goods
Grave goods
Grave goods, in archaeology and anthropology, are the items buried along with the body.They are usually personal possessions, supplies to smooth the deceased's journey into the afterlife or offerings to the gods. Grave goods are a type of votive deposit...
and funerary items along with human remains. It is important to note, however, the absence of trade goods from other Indian groups. Some items found in effigy mounds include pottery, weapons, tools, and other valuable items, in addition to skeletal remains. These items would have been placed with the dead to make their journey and new life in the afterlife more familiar and comfortable.