Encyclopedia
Devil’s Bridge is a term applied to dozens of ancient bridge
Bridge
A bridge is a structure built to span physical obstacles such as a body of water, valley, or road, for the purpose of providing passage over the obstacle...
s, found primarily in Europe
Europe
Europe is, by convention, one of the world's seven continents. Comprising the westernmost peninsula of Eurasia, Europe is generally 'divided' from Asia to its east by the watershed divides of the Ural and Caucasus Mountains, the Ural River, the Caspian and Black Seas, and the waterways connecting...
. Most of these bridges are stone or masonry
Masonry
Masonry is the building of structures from individual units laid in and bound together by mortar; the term masonry can also refer to the units themselves. The common materials of masonry construction are brick, stone, marble, granite, travertine, limestone; concrete block, glass block, stucco, and...
arch bridge
Arch bridge
An arch bridge is a bridge with abutments at each end shaped as a curved arch. Arch bridges work by transferring the weight of the bridge and its loads partially into a horizontal thrust restrained by the abutments at either side...
s and represent a significant technological achievement. Each of the Devil's Bridges has a corresponding Devil-related myth or folktale.

Local lore often wrongly attributes these bridges to the Roman
Ancient Rome
Ancient Rome was a thriving civilization that grew on the Italian Peninsula as early as the 8th century BC. Located along the Mediterranean Sea and centered on the city of Rome, it expanded to one of the largest empires in the ancient world....
era, but in fact many of them are medieval
Middle Ages
The Middle Ages is a periodization of European history from the 5th century to the 15th century. The Middle Ages follows the fall of the Western Roman Empire in 476 and precedes the Early Modern Era. It is the middle period of a three-period division of Western history: Classic, Medieval and Modern...
, having been built between 1000 and 1600 AD. In medieval times some Roman roads
Devil's Causeway
The Devil's Causeway is a Roman road in Northumberland, in North East England. It branches off Dere Street north of Corbridge and can be traced through Northumberland for about north to Berwick-upon-Tweed.-Description:...
were themselves considered beyond human capabilities and needs, and therefore had to have been built by the devil. 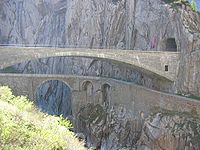 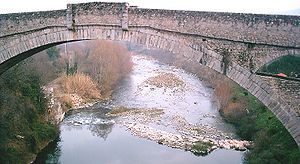 The bridges that fall into the Devil's Bridge category are so numerous that the legends about them form a special category in the Aarne-Thompson classification system
Aarne-Thompson classification system
The Aarne–Thompson classification system is a system for classifying folktales. First developed by Antti Aarne and published in 1910, it was translated and enlarged by Stith Thompson...
for folktale
Folklore
Folklore consists of legends, music, oral history, proverbs, jokes, popular beliefs, fairy tales and customs that are the traditions of a culture, subculture, or group. It is also the set of practices through which those expressive genres are shared. The study of folklore is sometimes called...
s (Number 1191). Some of the legends have elements of related folktale categories, for example Deceiving the Devil
Devil
The Devil is believed in many religions and cultures to be a powerful, supernatural entity that is the personification of evil and the enemy of God and humankind. The nature of the role varies greatly...
(AT #1196), The Devil's Contract (AT #756B), and The Master Builder legends.

One version of the tale presents the bridge builder and the Devil as adversaries. This reflects the fact that frequently, such as in the case of the Teufelsbrücke
Teufelsbrücke
The Teufelsbrücke is a bridge over the Schöllenen Gorge in the Swiss canton of Uri. The bridge provides access to the St. Gotthard Pass by crossing the gorge and the Reuss River below....
at the St. Gotthard Pass
St. Gotthard Pass
The Gotthard Pass or St. Gotthard Pass is a high mountain pass in Switzerland between Airolo in the canton of Ticino, and Göschenen in the canton of Uri, connecting the northern German-speaking part of Switzerland with the Italian-speaking part, along the route onwards to Milan.Though the pass...
, these bridges were built under such challenging conditions that successful completion of the bridge required a hero
Hero
A hero , in Greek mythology and folklore, was originally a demigod, their cult being one of the most distinctive features of ancient Greek religion...
ic effort on the part of the builders and the community, ensuring its legendary status.

Other versions of the legend feature an old lady or a simple herder
Herder
A herder is a worker who lives a possibly semi-nomadic life, caring for various domestic animals, in places where these animals wander pasture lands....
who makes a pact with the Devil
Pact with the Devil
A deal with the Devil, pact with the Devil, or Faustian bargain is a cultural motif widespread in the West, best exemplified by the legend of Faust and the figure of Mephistopheles, but elemental to many Christian folktales...
. In this version the devil agrees to build the bridge, and in return he will receive the first soul
Soul
A soul in certain spiritual, philosophical, and psychological traditions is the incorporeal essence of a person or living thing or object. Many philosophical and spiritual systems teach that humans have souls, and others teach that all living things and even inanimate objects have souls. The...
to cross it. After building the bridge (often overnight) the devil is outwitted by his adversary, for example by throwing bread to lure a dog over the bridge first, and is last seen descending into the water, bringing peace to the community. In the case of the Steinerne Brücke in Regensburg
Regensburg
Regensburg is a city in Bavaria, Germany, located at the confluence of the Danube and Regen rivers, at the northernmost bend in the Danube. To the east lies the Bavarian Forest. Regensburg is the capital of the Bavarian administrative region Upper Palatinate...
, the legend speaks of the devil helping in a race between the builders of the bridge and of the cathedral (in fact a significantly later construction), and a slight bump in the middle of the bridge is said to result from the devil leaping with rage on being tricked out of his prize.

Each of the bridges that have received the Devil's Bridge appellation is remarkable in some regard; most often for the technological hurdles surpassed in building the bridge, but on occasion also for its aesthetic
Aesthetics
Aesthetics is a branch of philosophy dealing with the nature of beauty, art, and taste, and with the creation and appreciation of beauty. It is more scientifically defined as the study of sensory or sensori-emotional values, sometimes called judgments of sentiment and taste...
grace, or for its economic
Economics
Economics is the social science that analyzes the production, distribution, and consumption of goods and services. The term economics comes from the Ancient Greek from + , hence "rules of the house"...
or strategic importance to the community it serves.

There are 49 Devil's Bridges in France, including: 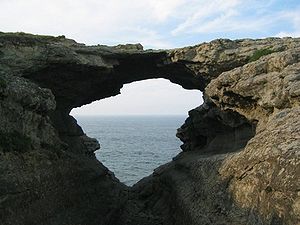