Encyclopedia
Ascoli Piceno is a town and comune
Comune
In Italy, the comune is the basic administrative division, and may be properly approximated in casual speech by the English word township or municipality.-Importance and function:...
in the Marche
Marche
The population density in the region is below the national average. In 2008, it was 161.5 inhabitants per km2, compared to the national figure of 198.8. It is highest in the province of Ancona , and lowest in the province of Macerata...
region of Italy
Italy
Italy , officially the Italian Republic languages]] under the European Charter for Regional or Minority Languages. In each of these, Italy's official name is as follows:;;;;;;;;), is a unitary parliamentary republic in South-Central Europe. To the north it borders France, Switzerland, Austria and...
, capital of the province of the same name
Province of Ascoli Piceno
The Province of Ascoli Piceno is a province in the Marche region of Italy. Its capital is the city of Ascoli Piceno.It has an area of 1,228 km², and a total population of 212,846 . There are 33 comuni in the province, see Comunes of the Province of Ascoli Piceno.-External links:**...
. Its population is c. 51,400.

Ascoli was founded by an Italic population (Piceni) several centuries before Rome's founding on the important Via Salaria
Via Salaria
The Via Salaria was an ancient Roman road in Italy.It eventually ran from Rome to Castrum Truentinum on the Adriatic coast - a distance of 242 km. The road also passed through Reate and Asculum...
, the salt road
Salt Road
A salt road ) is any of the prehistoric and historical trade routes by which essential salt has been transported to regions that lacked it ....
that connected Latium
Latium
Lazio is one of the 20 administrative regions of Italy, situated in the central peninsular section of the country. With about 5.7 million residents and a GDP of more than 170 billion euros, Lazio is the third most populated and the second richest region of Italy...
with the salt production areas on the Adriatic coast. In 268 BC it became a civitas foederata, a "federated" city with nominal independence from Rome. In 91 BC, together with other cities in central Italy, it revolted against Rome, but in 89 BC was reconquered and destroyed by Pompeius Strabo
Pompeius Strabo
Gnaeus Pompeius Strabo , whose cognomen means "cross eyed", is often referred to in English as Pompey Strabo to distinguish him from Strabo, the geographer. Strabo lived in the Roman Republic. Strabo was born and raised into a noble family in Picenum a rural district in Northern Italy, off the...
. Its inhabitants acquired Roman citizenship, following the developments and the eventual fall of the Roman Empire
Roman Empire
The Roman Empire was the post-Republican period of the ancient Roman civilization, characterised by an autocratic form of government and large territorial holdings in Europe and around the Mediterranean....
.

During the Middle Ages
Middle Ages
The Middle Ages is a periodization of European history from the 5th century to the 15th century. The Middle Ages follows the fall of the Western Roman Empire in 476 and precedes the Early Modern Era. It is the middle period of a three-period division of Western history: Classic, Medieval and Modern...
Ascoli was ravaged by the Ostrogoth
Ostrogoth
The Ostrogoths were a branch of the Goths , a Germanic tribe who developed a vast empire north of the Black Sea in the 3rd century AD and, in the late 5th century, under Theodoric the Great, established a Kingdom in Italy....
s and then by the Lombards
Lombards
The Lombards , also referred to as Longobards, were a Germanic tribe of Scandinavian origin, who from 568 to 774 ruled a Kingdom in Italy...
of King Faroald (578). After nearly two centuries as part of the Lombard Duchy of Spoleto
Duchy of Spoleto
The independent Duchy of Spoleto was a Lombard territory founded about 570 in central Italy by the Lombard dux Faroald.- Lombards :The Lombards, a Germanic people, had invaded Italy in 568 and conquered much of it, establishing a Kingdom divided between several dukes dependent on the King, who had...
(593-789), Ascoli was ruled by the Franks
Franks
The Franks were a confederation of Germanic tribes first attested in the third century AD as living north and east of the Lower Rhine River. From the third to fifth centuries some Franks raided Roman territory while other Franks joined the Roman troops in Gaul. Only the Salian Franks formed a...
through their vicars, but ultimately it was the bishop
Roman Catholic Diocese of Ascoli Piceno
The Italian Catholic diocese of Ascoli Piceno, in the Marche, has existed since the fourth century. Historically immediately dependent on the Holy See, it is now a suffragan of the archdiocese of Fermo.-History:...
s that gained influence and power over the city.

In 1189 a free republic
Republic
A republic is a form of government in which the people, or some significant portion of them, have supreme control over the government and where offices of state are elected or chosen by elected people. In modern times, a common simplified definition of a republic is a government where the head of...
an municipality was established but internal strife led dramatically to the demise of civic values and freedom and to unfortunate ventures against neighboring enemies. This unstable situation opened the way to foreign dictatorships, like those of Galeotto I Malatesta
Galeotto I Malatesta
Galeotto I Malatesta was an Italian condottiero, who was lord of Rimini, Fano, Ascoli Piceno, Cesena and Fossombrone.-Biography:Born in Rimini, he the son of Pandolfo I Malatesta and the brother of Malatesta II Malatesta. In 1333 he was captured while besieging Ferrara, but was soon freed and...
(14th century), initially recruited as a mercenary (condottiero) in the war against Fermo
Fermo
Fermo is a town and comune of the Marche, Italy, in the Province of Fermo.Fermo is located on a hill, the Sabulo with a fine view, on a branch from Porto San Giorgio on the Adriatic coast railway....
, and Francesco Sforza. Sforza was ousted in 1482, but Ascoli was again compelled to submit to the Papal
Papal States
The Papal State, State of the Church, or Pontifical States were among the major historical states of Italy from roughly the 6th century until the Italian peninsula was unified in 1861 by the Kingdom of Piedmont-Sardinia .The Papal States comprised territories under...
suzerainty. In 1860 it was annexed, together with Marche
Marche
The population density in the region is below the national average. In 2008, it was 161.5 inhabitants per km2, compared to the national figure of 198.8. It is highest in the province of Ancona , and lowest in the province of Macerata...
and Umbria
Umbria
Umbria is a region of modern central Italy. It is one of the smallest Italian regions and the only peninsular region that is landlocked.Its capital is Perugia.Assisi and Norcia are historical towns associated with St. Francis of Assisi, and St...
, into the newly unified Kingdom of Italy.

The central historical part of the city is built in marble called travertino
Travertine
Travertine is a form of limestone deposited by mineral springs, especially hot springs. Travertine often has a fibrous or concentric appearance and exists in white, tan, and cream-colored varieties. It is formed by a process of rapid precipitation of calcium carbonate, often at the mouth of a hot...
, a grey-hued stone extracted from the surrounding mountains. Its central Renaissance square, Piazza del Popolo ("Square of the People") is considered one of the most beautiful in Italy. According to traditional accounts, Ascoli Piceno was home to more than two hundred towers in the Middle Ages: today some fifty can still be seen.

In Castel Trosino, not far from the city, in 1893 a rare 6th-century Lombard
Lombards
The Lombards , also referred to as Longobards, were a Germanic tribe of Scandinavian origin, who from 568 to 774 ruled a Kingdom in Italy...
necropolis
Necropolis
A necropolis is a large cemetery or burial ground, usually including structural tombs. The word comes from the Greek νεκρόπολις - nekropolis, literally meaning "city of the dead"...
was found. 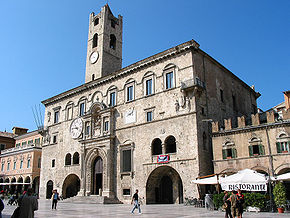 Recent industrialization has brought to Ascoli several Italian and multinational companies (YKK
YKK Group
The is a Japanese group of manufacturing companies. As the world's largest zipper manufacturer, YKK Group is most famous for making zippers; however, it also manufactures other fastening products, architectural products, as well as industrial machinery....
, Manuli, Pfizer
Pfizer
Pfizer, Inc. is an American multinational pharmaceutical corporation. The company is based in New York City, New York with its research headquarters in Groton, Connecticut, United States...
, Barilla) but the bulk of the economy is made up of small and medium sized enterprises and by those providing professional services to the area. Agriculture is still important (wheat, olives, fruits).

The main festivity is on the first Sunday in August. The historical parade with more than 1500 people dressed in Renaissance costume is held in celebration of Saint Emidio, protector of the city. The parade is followed by a tournament, called Quintana
Quintain
Quintain may refer to:* Quintain , a jousting game* Quintain Estates and Development, a property company* Quintaine Americana, a rock band...
, in which six knights, each competing for one of the six neighborhoods in the city, ride the course one after the other trying to hit an effigy of an Arab warrior. Strength and ability are necessary for the knight to win the palio or grand prize.

The town is also home to Ascoli Calcio
Ascoli Calcio 1898
Ascoli Calcio 1898 is an Italian football club based in Ascoli Piceno, Marche. The club was formed in 1898 and currently plays in Italian Serie B, having returned to it after two seasons spent in Serie A...
, currently in the Serie B
Serie B
Serie B, currently named Serie bwin due to sponsorship reasons, is the second-highest division in the Italian football league system after the Serie A. It is contested by 22 teams and organized by the Lega Serie B since July 2010, after the split of Lega Calcio that previously took care of both the...
. The team is also known as "Picchio" (Woodpecker), in honour of the bird shown on the Marche
Marche
The population density in the region is below the national average. In 2008, it was 161.5 inhabitants per km2, compared to the national figure of 198.8. It is highest in the province of Ancona , and lowest in the province of Macerata...
's Flag. Ascoli Piceno was founded by ancient italic people after following a woodpecker that signed them the place.

Ascoli Piceno is twinned
Town twinning
Twin towns and sister cities are two of many terms used to describe the cooperative agreements between towns, cities, and even counties in geographically and politically distinct areas to promote cultural and commercial ties.- Terminology :...
with: Massy
Massy
Massy is a commune in the southern suburbs of Paris, France. It is located 14.7 kilometres from the center of Paris.-Population:...
, France
France
The French Republic , The French Republic , The French Republic , (commonly known as France , is a unitary semi-presidential republic in Western Europe with several overseas territories and islands located on other continents and in the Indian, Pacific, and Atlantic oceans. Metropolitan France...
, since 1997 Trier
Trier
Trier, historically called in English Treves is a city in Germany on the banks of the Moselle. It is the oldest city in Germany, founded in or before 16 BC....
, Germany
Germany
Germany , officially the Federal Republic of Germany , is a federal parliamentary republic in Europe. The country consists of 16 states while the capital and largest city is Berlin. Germany covers an area of 357,021 km2 and has a largely temperate seasonal climate...
, since 1958 Chattanooga, USA since 2006