Encyclopedia
Cahors is the capital of the Lot department in south-western France.

Its site is dramatic being contained on three sides within an udder shaped twist in the river Lot
Lot River
The Lot, , originally the Olt , is a river in France, right tributary of the Garonne. It rises in the Cévennes, flowing west through Quercy, where it flows into the Garonne near Aiguillon, a total distance of...
known as a 'presqu'île' or peninsula. Today it is perhaps best known as the centre of the famous AOC
Appellation d'Origine Contrôlée
Appellation d’origine contrôlée , which translates as "controlled designation of origin", is the French certification granted to certain French geographical indications for wines, cheeses, butters, and other agricultural products, all under the auspices of the government bureau Institut National...
'black' wine known since the Middle Ages
Middle Ages
The Middle Ages is a periodization of European history from the 5th century to the 15th century. The Middle Ages follows the fall of the Western Roman Empire in 476 and precedes the Early Modern Era. It is the middle period of a three-period division of Western history: Classic, Medieval and Modern...
and exported via Bordeaux
Bordeaux
Bordeaux is a port city on the Garonne River in the Gironde department in southwestern France.The Bordeaux-Arcachon-Libourne metropolitan area, has a population of 1,010,000 and constitutes the sixth-largest urban area in France. It is the capital of the Aquitaine region, as well as the prefecture...
, long before that region had developed its own viticulture industry. 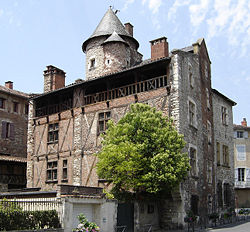 Cahors has had a rich history since Celtic times
Gaul
Gaul was a region of Western Europe during the Iron Age and Roman era, encompassing present day France, Luxembourg and Belgium, most of Switzerland, the western part of Northern Italy, as well as the parts of the Netherlands and Germany on the left bank of the Rhine. The Gauls were the speakers of...
. The original name of the town was Divona or Divona Cadurcorum, "Divona of the Cadurci," a Celtic people of Gaul before the Roman conquest in the 50s BC. Cahors derives from Cadurcorum. It has declined economically since the Middle Ages, and lost its university in the eighteenth century. Today it is a popular tourist centre with people coming to enjoy its mediaeval quarter and the unique 14th century fortified Valentré bridge. It is the seat of the Diocese of Cahors.

Cahors was prominent in the Middle Ages and saw considerable conflict during the Hundred Years War and the later Wars of Religion
French Wars of Religion
The French Wars of Religion is the name given to a period of civil infighting and military operations, primarily fought between French Catholics and Protestants . The conflict involved the factional disputes between the aristocratic houses of France, such as the House of Bourbon and House of Guise...
. It was also infamous at that time for having bankers that charged interest on their loans. The church in these times said that using money as an end in itself (usury
Usury
Usury Originally, when the charging of interest was still banned by Christian churches, usury simply meant the charging of interest at any rate . In countries where the charging of interest became acceptable, the term came to be used for interest above the rate allowed by law...
) was a sin. Because of this Cahors became synonymous with this sin, and was mentioned in Dante
Dante Alighieri
Durante degli Alighieri, mononymously referred to as Dante , was an Italian poet, prose writer, literary theorist, moral philosopher, and political thinker. He is best known for the monumental epic poem La commedia, later named La divina commedia ...
's Inferno
The Divine Comedy
The Divine Comedy is an epic poem written by Dante Alighieri between 1308 and his death in 1321. It is widely considered the preeminent work of Italian literature, and is seen as one of the greatest works of world literature...
(XI.50) alongside Sodom
Sodom and Gomorrah
Sodom and Gomorrah were cities mentioned in the Book of Genesis and later expounded upon throughout the Hebrew Bible, the New Testament and Deuterocanonical sources....
as wicked.

Pope John XXII
Pope John XXII
Pope John XXII , born Jacques Duèze , was pope from 1316 to 1334. He was the second Pope of the Avignon Papacy , elected by a conclave in Lyon assembled by Philip V of France...
, born Jacques Duèze or d'Euse, was born in Cahors in 1249, the son of a shoemaker, and it was the home of Dutch poet Ankie Peypers (1928–2008), winner of the 1962 Anne Frank-award. In the 2007 Tour de France
2007 Tour de France
The 2007 Tour de France, the 94th running of the race, took place from 7 July to 29 July 2007. The Tour began with a prologue in London, and ended with the traditional finish in Paris. Along the way, the route also passed through Belgium and Spain...
, Cahors was the start of stage 18. 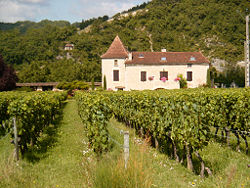 The area around Cahors produces wine, primarily robust and tannic red wine. Wine from the Cahors appellation must be made from at least 70% Cot (also called Malbec
Malbec
Malbec is a purple grape variety used in making red wine. The grapes tend to have an inky dark color and robust tannins, and are long known as one of the six grapes allowed in the blend of red Bordeaux wine. The French plantations of Malbec are now found primarily in Cahors in the South West...
, Mabeck, Auxerrois and Pressac) grape, with a maximum of 30% Merlot
Merlot
Merlot is a darkly blue-coloured wine grape, that is used as both a blending grape and for varietal wines. The name Merlot is thought to derive from the Old French word for young blackbird, merlot, a diminutive of merle, the blackbird , probably from the color of the grape. Merlot-based wines...
or Tannat
Tannat
Tannat is a red wine grape, historically grown in South West France in the Madiran AOC and is now one of the most prominent grapes in Uruguay, where it is considered the "national grape". It is also grown in Argentina, Australia, Brazil, Peru, and in Italy's Puglia region where it is used as a...
grape varieties.