Encyclopedia
Cryolite is an uncommon mineral
Mineral
A mineral is a naturally occurring solid chemical substance formed through biogeochemical processes, having characteristic chemical composition, highly ordered atomic structure, and specific physical properties. By comparison, a rock is an aggregate of minerals and/or mineraloids and does not...
identified with the once large deposit at Ivigtût
Ivittuut
Ivittuut, was a municipality , located on the coast of Arsuk fjord in southern Greenland. With an area of just 100 km² , it was the smallest municipality of Greenland, bordering on the former Narsaq municipality in the north, east, and south, and on the west by the Labrador Sea...
on the west coast of Greenland
Greenland
Greenland is an autonomous country within the Kingdom of Denmark, located between the Arctic and Atlantic Oceans, east of the Canadian Arctic Archipelago. Though physiographically a part of the continent of North America, Greenland has been politically and culturally associated with Europe for...
, depleted by 1987.

It was historically used as an ore of aluminium and later in the electrolytic processing of the aluminium
Aluminium
Aluminium or aluminum is a silvery white member of the boron group of chemical elements. It has the symbol Al, and its atomic number is 13. It is not soluble in water under normal circumstances....
-rich oxide ore
Ore
An ore is a type of rock that contains minerals with important elements including metals. The ores are extracted through mining; these are then refined to extract the valuable element....
bauxite
Bauxite
Bauxite is an aluminium ore and is the main source of aluminium. This form of rock consists mostly of the minerals gibbsite Al3, boehmite γ-AlO, and diaspore α-AlO, in a mixture with the two iron oxides goethite and hematite, the clay mineral kaolinite, and small amounts of anatase TiO2...
(itself a combination of aluminium oxide
Aluminium oxide
Aluminium oxide is an amphoteric oxide with the chemical formula 23. It is commonly referred to as alumina, or corundum in its crystalline form, as well as many other names, reflecting its widespread occurrence in nature and industry...
minerals such as gibbsite
Gibbsite
Gibbsite, Al3, is one of the mineral forms of aluminium hydroxide. It is often designated as γ-Al3 . It is also sometimes called hydrargillite ....
, boehmite
Boehmite
Boehmite or Böhmite is an aluminium oxide hydroxide mineral, a component of the aluminium ore bauxite. It is dimorphous with diaspore. It crystallizes in the orthorhombic dipyramidal system and is typically massive in habit. It is white with tints of yellow, green, brown or red due to impurities...
and diaspore
Diaspore
Diaspore is a native aluminium oxide hydroxide, α-AlO, crystallizing in the orthorhombic system and isomorphous with goethite. It occurs sometimes as flattened crystals, but usually as lamellar or scaly masses, the flattened surface being a direction of perfect cleavage on which the lustre is...
). The difficulty of separating aluminium from oxygen in the oxide ores was overcome by the use of cryolite as a flux to dissolve the oxide mineral(s). Pure cryolite itself melts at 1012 °C (1285 K), and it can dissolve the aluminium oxides sufficiently well to allow easy extraction of the aluminium by electrolysis. Considerable energy is still required for both heating the materials and the electrolysis, but it is much more energy-efficient than melting the oxides themselves. Now, as natural cryolite is too rare to be used for this purpose, synthetic sodium aluminium fluoride is produced from the common mineral fluorite
Fluorite
Fluorite is a halide mineral composed of calcium fluoride, CaF2. It is an isometric mineral with a cubic habit, though octahedral and more complex isometric forms are not uncommon...
. 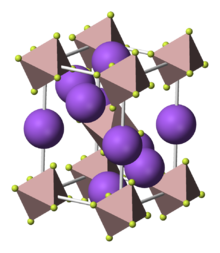 Cryolite occurs as glassy, colorless, white-reddish to gray-black prismatic monoclinic crystals. It has a Mohs hardness of 2.5 to 3 and a specific gravity
Specific gravity
Specific gravity is the ratio of the density of a substance to the density of a reference substance. Apparent specific gravity is the ratio of the weight of a volume of the substance to the weight of an equal volume of the reference substance. The reference substance is nearly always water for...
of about 2.95 to 3.0. It is translucent to transparent with a very low refractive index
Refractive index
In optics the refractive index or index of refraction of a substance or medium is a measure of the speed of light in that medium. It is expressed as a ratio of the speed of light in vacuum relative to that in the considered medium....
of about 1.34, which is very close to that of water
Water
Water is a chemical substance with the chemical formula H2O. A water molecule contains one oxygen and two hydrogen atoms connected by covalent bonds. Water is a liquid at ambient conditions, but it often co-exists on Earth with its solid state, ice, and gaseous state . Water also exists in a...
; thus if immersed in water, cryolite becomes essentially invisible.

Cryolite has also been reported at Pikes Peak
Pikes Peak
Pikes Peak is a mountain in the Front Range of the Rocky Mountains, west of Colorado Springs, Colorado, in El Paso County in the United States of America....
, Colorado
Colorado
Colorado is a U.S. state that encompasses much of the Rocky Mountains as well as the northeastern portion of the Colorado Plateau and the western edge of the Great Plains...
; Mont Saint-Hilaire
Mont Saint-Hilaire
Mont Saint-Hilaire , is an isolated hill, high, in the Montérégie region of southern Quebec. It is about thirty kilometres east of Montreal, and immediately east of the Richelieu River. It is one of the Monteregian Hills...
, Quebec
Quebec
Quebec or is a province in east-central Canada. It is the only Canadian province with a predominantly French-speaking population and the only one whose sole official language is French at the provincial level....
; and at Miass
Miass
Miass is a city in Chelyabinsk Oblast, Russia, located west of Chelyabinsk, on the eastern slope of the southern Urals, on the bank of the Miass River. Population: -History:...
, Russia
Russia
Russia or , officially known as both Russia and the Russian Federation , is a country in northern Eurasia. It is a federal semi-presidential republic, comprising 83 federal subjects...
. It is also known in small quantities in Brazil
Brazil
Brazil , officially the Federative Republic of Brazil , is the largest country in South America. It is the world's fifth largest country, both by geographical area and by population with over 192 million people...
, the Czech Republic
Czech Republic
The Czech Republic is a landlocked country in Central Europe. The country is bordered by Poland to the northeast, Slovakia to the east, Austria to the south, and Germany to the west and northwest....
, Namibia
Namibia
Namibia, officially the Republic of Namibia , is a country in southern Africa whose western border is the Atlantic Ocean. It shares land borders with Angola and Zambia to the north, Botswana to the east and South Africa to the south and east. It gained independence from South Africa on 21 March...
, Norway
Norway
Norway , officially the Kingdom of Norway, is a Nordic unitary constitutional monarchy whose territory comprises the western portion of the Scandinavian Peninsula, Jan Mayen, and the Arctic archipelago of Svalbard and Bouvet Island. Norway has a total area of and a population of about 4.9 million...
, Ukraine
Ukraine
Ukraine is a country in Eastern Europe. It has an area of 603,628 km², making it the second largest contiguous country on the European continent, after Russia...
, and several American states.

Cryolite was first described in 1799 from a deposit of it in Ivigtut and Arksukfiord, West Greenland. The name is derived from the Greek language
Greek language
Greek is an independent branch of the Indo-European family of languages. Native to the southern Balkans, it has the longest documented history of any Indo-European language, spanning 34 centuries of written records. Its writing system has been the Greek alphabet for the majority of its history;...
words cryò = chill, and lithòs = stone. The Pennsylvania Salt Manufacturing Company used large amounts of cryolite to make caustic soda at its Natrona
Natrona, Pennsylvania
Natrona is an unincorporated community in Harrison Township, Allegheny County in the U.S. state of Pennsylvania. It is located in Western Pennsylvania within the Pittsburgh Metropolitan Statistical Area, approximately northeast of Downtown Pittsburgh...
, Pennsylvania
Pennsylvania
The Commonwealth of Pennsylvania is a U.S. state that is located in the Northeastern and Mid-Atlantic regions of the United States. The state borders Delaware and Maryland to the south, West Virginia to the southwest, Ohio to the west, New York and Ontario, Canada, to the north, and New Jersey to...
works during the 19th and 20th centuries.
The source of this article is wikipedia, the free encyclopedia.  The text of this article is licensed under the GFDL.