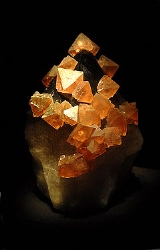 Overview
Fluorite is a halide mineral
Halide mineral
The halide mineral class include those minerals with a dominant halide anion . Complex halide minerals may also have polyatomic anions in addition to or that include halides.Examples include the following:*Halite NaCl*Sylvite KCl...
composed of calcium fluoride
Calcium fluoride
Calcium fluoride is the inorganic compound with the formula CaF2. This ionic compound of calcium and fluorine occurs naturally as the mineral fluorite . It is the source of most of the world's fluorine. This insoluble solid adopts a cubic structure wherein calcium is coordinated to eight fluoride...
, Ca
Calcium
Calcium is the chemical element with the symbol Ca and atomic number 20. It has an atomic mass of 40.078 amu. Calcium is a soft gray alkaline earth metal, and is the fifth-most-abundant element by mass in the Earth's crust...
F2
Fluorine
Fluorine is the chemical element with atomic number 9, represented by the symbol F. It is the lightest element of the halogen column of the periodic table and has a single stable isotope, fluorine-19. At standard pressure and temperature, fluorine is a pale yellow gas composed of diatomic...
. It is an isometric mineral with a cubic habit
Crystal habit
Crystal habit is an overall description of the visible external shape of a mineral. This description can apply to an individual crystal or an assembly of crystals or aggregates....
, though octahedral and more complex isometric forms are not uncommon. Crystal twinning
Crystal twinning
Crystal twinning occurs when two separate crystals share some of the same crystal lattice points in a symmetrical manner. The result is an intergrowth of two separate crystals in a variety of specific configurations. A twin boundary or composition surface separates the two crystals....
is common and adds complexity to the observed crystal
Crystal
A crystal or crystalline solid is a solid material whose constituent atoms, molecules, or ions are arranged in an orderly repeating pattern extending in all three spatial dimensions. The scientific study of crystals and crystal formation is known as crystallography...
habits.

The word fluorite is derived from the Latin
Latin
Latin is an Italic language originally spoken in Latium and Ancient Rome. It, along with most European languages, is a descendant of the ancient Proto-Indo-European language. Although it is considered a dead language, a number of scholars and members of the Christian clergy speak it fluently, and...
root fluo, meaning "to flow" because the mineral is used in iron smelting
Smelting
Smelting is a form of extractive metallurgy; its main use is to produce a metal from its ore. This includes iron extraction from iron ore, and copper extraction and other base metals from their ores...
to decrease the viscosity
Viscosity
Viscosity is a measure of the resistance of a fluid which is being deformed by either shear or tensile stress. In everyday terms , viscosity is "thickness" or "internal friction". Thus, water is "thin", having a lower viscosity, while honey is "thick", having a higher viscosity...
of slags at a given temperature.

What type of rock is fluorite? i know it is a mineral but i mean like igneous,sedimentary or metamorphic. i need to know for i science project witch i...
More
x