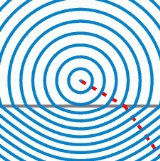 Overview
In optics
Optics
Optics is the branch of physics which involves the behavior and properties of light, including its interactions with matter and the construction of instruments that use or detect it. Optics usually describes the behavior of visible, ultraviolet, and infrared light...
the refractive index or index of refraction of a substance or medium is a measure of the speed of light
Speed of light
The speed of light in vacuum, usually denoted by c, is a physical constant important in many areas of physics. Its value is 299,792,458 metres per second, a figure that is exact since the length of the metre is defined from this constant and the international standard for time...
in that medium. It is expressed as a ratio of the speed of light in vacuum
Vacuum
In everyday usage, vacuum is a volume of space that is essentially empty of matter, such that its gaseous pressure is much less than atmospheric pressure. The word comes from the Latin term for "empty". A perfect vacuum would be one with no particles in it at all, which is impossible to achieve in...
relative to that in the considered medium.
This can be written mathematically as:


For example, the refractive index of water
Water
Water is a chemical substance with the chemical formula H2O. A water molecule contains one oxygen and two hydrogen atoms connected by covalent bonds. Water is a liquid at ambient conditions, but it often co-exists on Earth with its solid state, ice, and gaseous state . Water also exists in a...
is 1.33, meaning that light travels 1.33 times as fast in vacuum as it does in water.

I am looking for refractive index(both real & imaginary) of sucrose solution at 530nm for different concentrations from 2 to 24%. Can somebody please...
More
x