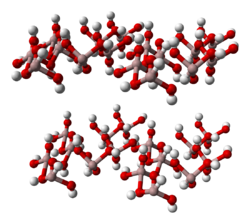 Gibbsite is an important ore of aluminium
Aluminium
Aluminium or aluminum is a silvery white member of the boron group of chemical elements. It has the symbol Al, and its atomic number is 13. It is not soluble in water under normal circumstances....
in that it is one of three main phases
Phase (matter)
In the physical sciences, a phase is a region of space , throughout which all physical properties of a material are essentially uniform. Examples of physical properties include density, index of refraction, and chemical composition...
that make up the rock bauxite
Bauxite
Bauxite is an aluminium ore and is the main source of aluminium. This form of rock consists mostly of the minerals gibbsite Al3, boehmite γ-AlO, and diaspore α-AlO, in a mixture with the two iron oxides goethite and hematite, the clay mineral kaolinite, and small amounts of anatase TiO2...
. Bauxite is often thought of as a mineral but it is really a rock composed of hydroxide and oxyhydroxide minerals such as gibbsite, boehmite
Boehmite
Boehmite or Böhmite is an aluminium oxide hydroxide mineral, a component of the aluminium ore bauxite. It is dimorphous with diaspore. It crystallizes in the orthorhombic dipyramidal system and is typically massive in habit. It is white with tints of yellow, green, brown or red due to impurities...
(γ-AlO(OH)), and diaspore
Diaspore
Diaspore is a native aluminium oxide hydroxide, α-AlO, crystallizing in the orthorhombic system and isomorphous with goethite. It occurs sometimes as flattened crystals, but usually as lamellar or scaly masses, the flattened surface being a direction of perfect cleavage on which the lustre is...
(α-AlO(OH)), as well as clay
Clay
Clay is a general term including many combinations of one or more clay minerals with traces of metal oxides and organic matter. Geologic clay deposits are mostly composed of phyllosilicate minerals containing variable amounts of water trapped in the mineral structure.- Formation :Clay minerals...
s, silt
Silt
Silt is granular material of a size somewhere between sand and clay whose mineral origin is quartz and feldspar. Silt may occur as a soil or as suspended sediment in a surface water body...
, and iron oxide
Iron oxide
Iron oxides are chemical compounds composed of iron and oxygen. All together, there are sixteen known iron oxides and oxyhydroxides.Iron oxides and oxide-hydroxides are widespread in nature, play an important role in many geological and biological processes, and are widely utilized by humans, e.g.,...
s and hydroxide
Hydroxide
Hydroxide is a diatomic anion with chemical formula OH−. It consists of an oxygen and a hydrogen atom held together by a covalent bond, and carrying a negative electric charge. It is an important but usually minor constituent of water. It functions as a base, as a ligand, a nucleophile, and a...
s.

Gibbsite has three named structural polymorphs
Polymorphism (materials science)
Polymorphism in materials science is the ability of a solid material to exist in more than one form or crystal structure. Polymorphism can potentially be found in any crystalline material including polymers, minerals, and metals, and is related to allotropy, which refers to chemical elements...
or polytypes: bayerite (designated often as α-Al(OH)3, but sometimes as β-Al(OH)3), doyleite, and nordstrandite. Gibbsite and bayerite are monoclinic, whereas doyleite and nordstrandite are triclinic forms.

The structure of gibbsite is interesting and analogous to the basic structure of the mica
Mica
The mica group of sheet silicate minerals includes several closely related materials having highly perfect basal cleavage. All are monoclinic, with a tendency towards pseudohexagonal crystals, and are similar in chemical composition...
s. The basic structure forms stacked sheets of linked octahedron
Octahedron
In geometry, an octahedron is a polyhedron with eight faces. A regular octahedron is a Platonic solid composed of eight equilateral triangles, four of which meet at each vertex....
s of aluminium hydroxide. The octahedrons are composed of aluminium ions with a +3 charge bonded to six octahedrally coordinated hydroxides with a -1 charge. Each of the hydroxides is bonded to only two aluminium atoms because one third of the octahedrons are vacant a central aluminium. The result is a neutral sheet since +3/6 = +1/2 (+3 charge on the aluminiums divided by six hydroxide bonds times the number of aluminiums) and -1/2 = -1/2 (-1 charge on the hydroxides divided between only two aluminiums); thus the charges cancel. The lack of a charge on the gibbsite sheets means that there is no charge to retain ions between the sheets and act as a "glue" to keep the sheets together. The sheets are only held together by weak residual bonds and this results in a very soft easily cleaved mineral.

Gibbsite's structure is closely related to the structure of brucite
Brucite
Brucite is the mineral form of magnesium hydroxide, with the chemical formula Mg2. It is a common alteration product of periclase in marble; a low-temperature hydrothermal vein mineral in metamorphosed limestones and chlorite schists; and formed during serpentinization of dunites...
, Mg(OH)2. However the lower charge in brucite's magnesium (+2) as opposed to gibbsite's aluminium (+3) does not require that one third of the octahedrons be vacant of a central ion in order to maintain a neutral sheet. The different symmetry of gibbsite and brucite is due to the different way that the layers are stacked.

It is the gibbsite layer that in a way forms the "floor plan" for the mineral corundum
Corundum
Corundum is a crystalline form of aluminium oxide with traces of iron, titanium and chromium. It is a rock-forming mineral. It is one of the naturally clear transparent materials, but can have different colors when impurities are present. Transparent specimens are used as gems, called ruby if red...
, Al2O3. The basic structure of corundum is identical to gibbsite except the hydroxides are replaced by oxygen
Oxygen
Oxygen is the element with atomic number 8 and represented by the symbol O. Its name derives from the Greek roots ὀξύς and -γενής , because at the time of naming, it was mistakenly thought that all acids required oxygen in their composition...
. Since oxygen has a charge of -2 the layers are not neutral and require that they must be bonded to other aluminiums above and below the initial layer producing the framework structure that is the structure of corundum.

Gibbsite is interesting for another reason because it is often found as a part of the structure of other minerals. The neutral aluminium hydroxide sheets are found sandwiched between silicate sheets in important clay groups: the illite
Illite
Illite is a non-expanding, clay-sized, micaceous mineral. Illite is a phyllosilicate or layered alumino-silicate. Its structure is constituted by the repetition of tetrahedron – octahedron – tetrahedron layers. The interlayer space is mainly occupied by poorly hydrated potassium cations...
, kaolinite
Kaolinite
Kaolinite is a clay mineral, part of the group of industrial minerals, with the chemical composition Al2Si2O54. It is a layered silicate mineral, with one tetrahedral sheet linked through oxygen atoms to one octahedral sheet of alumina octahedra...
, and montmorillonite
Montmorillonite
Montmorillonite is a very soft phyllosilicate group of minerals that typically form in microscopic crystals, forming a clay. It is named after Montmorillon in France. Montmorillonite, a member of the smectite family, is a 2:1 clay, meaning that it has 2 tetrahedral sheets sandwiching a central...
/smectite groups. The individual aluminium hydroxide layers are identical to the individual layers of gibbsite and are referred to as the gibbsite layers.

Gibbsite is named after George Gibbs
George Gibbs (mineralogist)
George Gibbs was an American mineralogist and mineral collector. The mineral gibbsite is named after him....
(1776–1833), an American mineral collector. G. Gibbs' collection was acquired by Yale University
Yale University
Yale University is a private, Ivy League university located in New Haven, Connecticut, United States. Founded in 1701 in the Colony of Connecticut, the university is the third-oldest institution of higher education in the United States...
early in the nineteenth century.