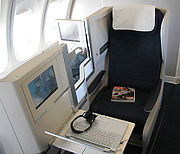 Business class is a travel class
Travel class
A travel class is a quality of accommodation on public transport. The accommodation could be a seat or a cabin for example. Higher travel classes are more comfortable and more expensive.-Airline booking codes:...
available on many commercial airlines and rail lines, known by brand names which vary by airline or rail company. In the airline industry, it was originally intended as an intermediate level of service between economy class
Economy class
__FORCETOC__Economy class, also called coach class , steerage, or standard class, is the lowest class of seating in air travel, rail travel, and sometimes ferry or maritime travel....
and first class
First class travel
First class is the most luxurious class of accommodation on a train, passenger ship, airplane, or other conveyance. It is usually much more expensive than business class and economy class, and offers the best amenities.-Aviation:...
, but many airlines now offer business class as the highest level of service. Business class is distinguished from other travel classes by the quality of seating, food, drinks, ground service and other amenities.

Around this time, there was speculation in the airline industry that supersonic aircraft
Supersonic aircraft
A supersonic aircraft is designed to exceed the speed of sound in at least some of its normal flight configurations.-Overview:The great majority of supersonic aircraft today are military or experimental aircraft...
would corner the market for the highest-paying premium passengers, and that a three-class market would emerge consisting of supersonic first class and subsonic business and economy classes. In 1977, El Al
El Al
El Al Israel Airlines Ltd , trading as El Al , is the flag carrier of Israel. It operates scheduled domestic and international services and cargo flights to Europe, North America, Africa and the Far East from its main base in Ben Gurion International Airport...
announced plans to reconfigure its aircraft with a small first class cabin and larger business class cabin on the assumption that most transatlantic first-class passengers would shift their business to the Concorde
Concorde
Aérospatiale-BAC Concorde was a turbojet-powered supersonic passenger airliner, a supersonic transport . It was a product of an Anglo-French government treaty, combining the manufacturing efforts of Aérospatiale and the British Aircraft Corporation...
.

British Airways introduced "Club Class," a separate premium cabin with numerous amenities, in October 1978 under CEO Colin Marshall as a means of further distinguishing full-fare business travelers from tourists flying on discounted fares. Pan Am
Pan American World Airways
Pan American World Airways, commonly known as Pan Am, was the principal and largest international air carrier in the United States from 1927 until its collapse on December 4, 1991...
announced that it would introduce "Clipper Class" in July 1978, and both Air France
Air France
Air France , stylised as AIRFRANCE, is the French flag carrier headquartered in Tremblay-en-France, , and is one of the world's largest airlines. It is a subsidiary of the Air France-KLM Group and a founding member of the SkyTeam global airline alliance...
and Pan Am introduced business class in November 1978. Qantas
Qantas
Qantas Airways Limited is the flag carrier of Australia. The name was originally "QANTAS", an initialism for "Queensland and Northern Territory Aerial Services". Nicknamed "The Flying Kangaroo", the airline is based in Sydney, with its main hub at Sydney Airport...
claims to have launched the world's first Business Class in 1979.

Air Canada calls its domestic business class product "executive class", which evolved from a premium economy "Connoisseur Class" that was available for full fare paying economy passengers, essentially a guarantee of a vacant adjacent seat if possible and free alcohol service. Domestic First on Air Canada, available only on wide bodies, ceased to exist from 1992 as did International First, replaced by a somewhat diminished "Executive First" class. In the United States, business class is usually only offered on intercontinental and long-haul flights
Flight length
In aviation, the flight length is defined as the time airborne during a flight.- Domestic :A short-haul domestic flight is commonly categorized into being no longer than 1.5 hours in length, meaning that all domestic flights within a country such as the United Kingdom are short-haul...
, including certain transcontinental flight
Transcontinental flight
In the United States the term Transcontinental flight is travelling by air coast-to-coast over the continental United States.-History:The first transcontinental flight across the United States was made by Calbraith Perry Rodgers to win the Hearst prize offered by publisher William Randolph Hearst...
s. US carriers generally designate "first class" as the premium product on domestic two-cabin aircraft.

On the other hand, the airlines of Europe and much of the rest of the world brand the premium product on shorthaul two-cabin aircraft as "business class". European carriers generally offer a "business class" consisting of enhanced economy seating with better service. There may be a curtain to separate business from economy class, based on demand, but the seats are in the same cabin. Some airlines such as Lufthansa
Lufthansa
Deutsche Lufthansa AG is the flag carrier of Germany and the largest airline in Europe in terms of overall passengers carried. The name of the company is derived from Luft , and Hansa .The airline is the world's fourth-largest airline in terms of overall passengers carried, operating...
and British Airways use convertible seats that seat three people across in economy, or adjust with a lever to become two seats with a half seat length between them for business class use.

Business class has started to disappear from some short/medium haul routes, to be replaced with full fare economy and discount economy (KLM and SAS). On these routes, the seats are the same for all passengers, only the flexibility of the ticket and the food and beverage service differs. On shorter routes (typically less than one hour) many airlines have removed business class entirely (e.g. BMI
Bmi (airline)
British Midland Airways Limited , is an airline based at Donington Hall in Castle Donington in the United Kingdom, close to East Midlands Airport, and a fully owned subsidiary of Lufthansa...
on many routes) and offer only one class of service.

Most low-cost carrier
Low-cost carrier
A low-cost carrier or low-cost airline is an airline that generally has lower fares and fewer comforts...
s, such as Ryanair
Ryanair
Ryanair is an Irish low-cost airline. Its head office is at Dublin Airport and its primary operational bases at Dublin Airport and London Stansted Airport....
in Europe and JetBlue
JetBlue Airways
JetBlue Airways Corporation is an American low-cost airline. The company is headquartered in the Forest Hills neighborhood of the New York City borough of Queens. Its main base is John F. Kennedy International Airport, also in Queens....
in the United States, do not offer any premium classes of service. Although Jetblue, respectively, does offer a premium seating section for about $45 more for extra legroom, better seat pitch and priority boarding on most (if not all) of their flights. AirAsia charges a premium for passengers to sit in front of the aircraft or the exit seats which also offer more legroom as well as board first (such seats are called "Hot Seats").

The exact name for business class may vary between operators.

Bold text indicates the airline class is a combination of first and business class.

On Amtrak
Amtrak
The National Railroad Passenger Corporation, doing business as Amtrak , is a government-owned corporation that was organized on May 1, 1971, to provide intercity passenger train service in the United States. "Amtrak" is a portmanteau of the words "America" and "track". It is headquartered at Union...
in the United States, "business class" is the premium class of service on medium-haul trains, such as most Northeast Corridor
Northeast Corridor
The Northeast Corridor is a fully electrified railway line owned primarily by Amtrak serving the Northeast megalopolis of the United States from Boston in the north, via New York to Washington, D.C. in the south, with branches serving other cities...
trains and the Pacific Surfliner
Pacific Surfliner
The Pacific Surfliner is a Amtrak regional passenger train route serving communities on the coast of Southern California between San Diego and San Luis Obispo....
, and the main class of service on Acela Express
Acela Express
The Acela Express is Amtrak's high-speed rail service along the Northeast Corridor in the Northeast United States between Washington, D.C., and Boston via Baltimore, Philadelphia, and New York...
. "First class" is the premium class of service on Acela Express and is also the designation for bedroom accommodations on sleeper trains.

Until June 2009, Via Rail
VIA Rail
Via Rail Canada is an independent crown corporation offering intercity passenger rail services in Canada. It is headquartered near Montreal Central Station at 3 Place Ville-Marie in Montreal, Quebec....
in Canada premium class service was called "Via 1", on short range routes oriented towards business travel. The premium service on the transcontinental route (The Canadian
The Canadian
The Canadian is a Canadian transcontinental passenger train originally operated by the Canadian Pacific Railway between 1955 and 1978. It is currently operated as an Inter-city rail service by Via Rail Canada with service between Union Station in Toronto, Ontario and Pacific Central Station in...
) is called "Silver & Blue". In June 2009, "Via 1" was re-named "Business Class" and "Silver & Blue" (The Canadian) and "Easterly" (The Ocean) were re-named "Sleeper Touring Class" and "Totem" (The Skeena) was re-named "Touring Class".

In France, "business class" is a premium service of chauffeured limousine.