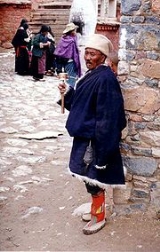 Encyclopedia
The most important places of pilgrimage
Pilgrimage
A pilgrimage is a journey or search of great moral or spiritual significance. Typically, it is a journey to a shrine or other location of importance to a person's beliefs and faith...
in Buddhism are located in the Gangetic plains of Northern India
India
India , officially the Republic of India , is a country in South Asia. It is the seventh-largest country by geographical area, the second-most populous country with over 1.2 billion people, and the most populous democracy in the world...
and Southern Nepal
Nepal
Nepal , officially the Federal Democratic Republic of Nepal, is a landlocked sovereign state located in South Asia. It is located in the Himalayas and bordered to the north by the People's Republic of China, and to the south, east, and west by the Republic of India...
, in the area between New Delhi
New Delhi
New Delhi is the capital city of India. It serves as the centre of the Government of India and the Government of the National Capital Territory of Delhi. New Delhi is situated within the metropolis of Delhi. It is one of the nine districts of Delhi Union Territory. The total area of the city is...
and Rajgir
Rajgir
Rajgir is a city and a notified area in Nalanda district in the Indian state of Bihar. The city of Rajgir was the first capital of the kingdom of Magadha, a state that would eventually evolve into the Mauryan Empire. Its date of origin is unknown, although ceramics dating to about 1000 BC have...
. This is the area where Gautama Buddha
Gautama Buddha
Siddhārtha Gautama was a spiritual teacher from the Indian subcontinent, on whose teachings Buddhism was founded. In most Buddhist traditions, he is regarded as the Supreme Buddha Siddhārtha Gautama (Sanskrit: सिद्धार्थ गौतम; Pali: Siddhattha Gotama) was a spiritual teacher from the Indian...
lived and taught, and the main sites connected to his life are now important places of pilgrimage for both Buddhists and Hindu
Hindu
Hindu refers to an identity associated with the philosophical, religious and cultural systems that are indigenous to the Indian subcontinent. As used in the Constitution of India, the word "Hindu" is also attributed to all persons professing any Indian religion...
s. However, many countries that are or were predominantly Buddhist have shrines and places which can be visited as a pilgrimage.

Gautama Buddha
Gautama Buddha
Siddhārtha Gautama was a spiritual teacher from the Indian subcontinent, on whose teachings Buddhism was founded. In most Buddhist traditions, he is regarded as the Supreme Buddha Siddhārtha Gautama (Sanskrit: सिद्धार्थ गौतम; Pali: Siddhattha Gotama) was a spiritual teacher from the Indian...
is said to have identified four sites most worthy of pilgrimage for his followers, saying that they would produce a feeling of spiritual urgency. These are:

In the later commentarial tradition, four other sites are also raised to a special status because Buddha had performed a certain miracle there. These four places, partly through the inclusion in this list of commentarial origin, became important Buddhist pilgrimage sites in ancient India, as the Attha-mahathanani (Pali
Páli
- External links :* *...
for 'The Eight Great Places'). It is important to note, however, that some of these events do not occur in the Tipitaka and are thus purely commentarial.

The first four of the Eight Great Places are identical to the places mentioned by the Buddha:
The last four are places where a certain miraculous event is reported to have occurred:

Some other pilgrimage places in India and Nepal connected to the life of Gautama Buddha
Gautama Buddha
Siddhārtha Gautama was a spiritual teacher from the Indian subcontinent, on whose teachings Buddhism was founded. In most Buddhist traditions, he is regarded as the Supreme Buddha Siddhārtha Gautama (Sanskrit: सिद्धार्थ गौतम; Pali: Siddhattha Gotama) was a spiritual teacher from the Indian...
are: Pataliputta
Patna
Paṭnā , is the capital of the Indian state of Bihar and the second largest city in Eastern India . Patna is one of the oldest continuously inhabited places in the world...
, Nalanda
Nalanda
Nālandā is the name of an ancient center of higher learning in Bihar, India.The site of Nalanda is located in the Indian state of Bihar, about 55 miles south east of Patna, and was a Buddhist center of learning from the fifth or sixth century CE to 1197 CE. It has been called "one of the...
, Vikramshila
Vikramshila
University was one of the two most important centers of Buddhist learning in India during the Pala dynasty, along with University. was established by King Dharmapala in response to a supposed decline in the quality of scholarship at Nālandā...
, Gaya
Gaya, India
Gaya is the second largest city of Bihar, India, and it is also the headquarters of Gaya District.Gaya is 100 kilometers south of Patna, the capital city of Bihar. Situated on the banks of Falgu River , it is a place sanctified by both the Hindu and the Buddhist religions...
, Kapilavastu
Kapilavastu
Kapilavastu is the name of a region of ancient Shakya kingdom that is considered a holy pilgrimage place for Buddhists. The search for the Buddha's birthplace following the accounts left by Xuanzang and Faxian involved various searches in the late 19th century...
, Kosambi, Amaravati
Amaravati, Andhra Pradesh
Amaravathi is a small town situated on the banks of the River Krishna in the Guntur District of Andhra Pradesh, India. It is famous for its Amareswara temple dedicated to Lord Shiva. The temple is one of the famous Pancharamas. Amaravati, also known as Dhanyakataka/Dharanikota was the site of a...
, Nagarjuna Konda
Nagarjuna Konda
Nagarjunakonda is a historical Buddhist town, now an island located near Nagarjuna Sagar in Guntur district/Nalgonda district,, in the Indian state of Andhra Pradesh. It is 150 km south east of the capital, Hyderabad. It was formed when a hill was submerged in the waters of the Nagarjuna...
, Sanchi
Sanchi
Sanchi is a small village in Raisen District of the state of Madhya Pradesh, India, it is located 46 km north east of Bhopal, and 10 km from Besnagar and Vidisha in the central part of the state of Madhya Pradesh. It is the location of several Buddhist monuments dating from the 3rd...
, Varanasi
Varanasi
-Etymology:The name Varanasi has its origin possibly from the names of the two rivers Varuna and Assi, for the old city lies in the north shores of the Ganga bounded by its two tributaries, the Varuna and the Asi, with the Ganges being to its south...
, Kesariya, Devadaha
Devadaha
Devadaha was a township of the Sākiyans . It is near Nawalparasi District of Nepal. The Buddha stayed there during his tours and preached to the monks on various topics...
, Pava
Pava
thumb|right|325px|A stupa built at the place where Cunda's house used to be, at the site of ancient Pava.Pava was a city in ancient India, at the time of Gautama Buddha. It was a city of the Mallas which the Buddha visited during his last journey, going there from Bhogagama and staying at Cunda's...
and MathuraMandaver(Bijnor U.P),Hapur(ghaziabad U.P).
Most of these places are located in the Gangetic plain.

Other famous places for Buddhist pilgrimage in various countries include: