Overview
Swayambhunath is an ancient religious complex atop a hill in the Kathmandu Valley
Kathmandu Valley
The Kathmandu Valley , located in Nepal, lies at the crossroads of ancient civilizations of Asia, and has at least 130 important monuments, including several places of pilgrimage for the Hindus and the Buddhists. There are seven UNESCO World Heritage Sites within this valley.-Etymology:The city of...
, west of Kathmandu city. It is also known as the Monkey Temple as there are holy monkeys living in parts of the temple in the north-west. The Tibetan name for the site means 'Sublime Trees' (Wylie
Wylie
Wylie may refer to:* Wylie * Wylie , mononymous Aboriginal companion of Edward John Eyre during his crossing of the Nullarbor Plain in Australia* Wylie, Wylie Qua, Access Diving, Gabriola Island, B.C...
:Phags.pa Shing.kun), for the many varieties of trees found on the hill.

How Can we conserve Syambhunath Temple?

Why Syambhunath is important in Nepal?
More

What is the importance of Syambhunath in Nepal?
More

Encyclopedia
Swayambhunath is an ancient religious complex atop a hill in the Kathmandu Valley
Kathmandu Valley
The Kathmandu Valley , located in Nepal, lies at the crossroads of ancient civilizations of Asia, and has at least 130 important monuments, including several places of pilgrimage for the Hindus and the Buddhists. There are seven UNESCO World Heritage Sites within this valley.-Etymology:The city of...
, west of Kathmandu city. It is also known as the Monkey Temple as there are holy monkeys living in parts of the temple in the north-west. The Tibetan name for the site means 'Sublime Trees' (Wylie
Wylie
Wylie may refer to:* Wylie * Wylie , mononymous Aboriginal companion of Edward John Eyre during his crossing of the Nullarbor Plain in Australia* Wylie, Wylie Qua, Access Diving, Gabriola Island, B.C...
:Phags.pa Shing.kun), for the many varieties of trees found on the hill. However, Shing.kun may be a corruption of the local Newari name for the complex, Singgu, meaning 'self-sprung'. For the Buddhist Newars in whose mythological history and origin myth as well as day-to-day religious practice, Swayambhunath occupies a central position, it is probably the most sacred among Buddhist pilgrimage
Buddhist pilgrimage
The most important places of pilgrimage in Buddhism are located in the Gangetic plains of Northern India and Southern Nepal, in the area between New Delhi and Rajgir. This is the area where Gautama Buddha lived and taught, and the main sites connected to his life are now important places of...
sites. For Tibetans and followers of Tibetan Buddhism, it second only to Boudhanath.

The Swayambhunath complex consists of a stupa
Stupa
A stupa is a mound-like structure containing Buddhist relics, typically the remains of Buddha, used by Buddhists as a place of worship....
, a variety of shrines and temples, some dating back to the Licchavi period. A Tibetan monastery
Monastery
Monastery denotes the building, or complex of buildings, that houses a room reserved for prayer as well as the domestic quarters and workplace of monastics, whether monks or nuns, and whether living in community or alone .Monasteries may vary greatly in size – a small dwelling accommodating only...
, museum and library are more recent additions. The stupa has Buddha's eyes and eyebrows painted on. Between them, there is something painted which looks like the nose - but is the Nepali symbol of 'unity', in the main Nepali language
Nepali language
Nepali or Nepalese is a language in the Indo-Aryan branch of the Indo-European language family.It is the official language and de facto lingua franca of Nepal and is also spoken in Bhutan, parts of India and parts of Myanmar...
dialect . There are also shops, restaurants and hostels. The site has two access points: a long stairway, claimed to have 365 steps, leading directly to the main platform of the temple, which is from the top of the hill to the east; and a car road around the hill from the south leading to the southwest entrance. The first sight on reaching the top of the stairway is the Vajra
Vajra
Vajra is a Sanskrit word meaning both thunderbolt and diamond...
. Tsultrim Allione
Tsultrim Allione
Lama Tsultrim Allione is an author and teacher who has studied in the Tibetan Buddhist lineage. She was born in 1947 in Maine, in the United States, and given the name Joan Rousmanière Ewing. She first travelled to India and Nepal in 1967, returned in 1969 and in 1970 she became one of the first...
describes the experience:

We were breathless and sweating as we stumbled up the last steep steps and practically fell upon the biggest vajra (thunder-bolt scepter) that I have ever seen. Behind this vajra was the vast, round, white dome of the stupa, like a full solid skirt, at the top of which were two giant Buddha eyes wisely looking out over the peaceful valley which was just beginning to come alive.

Much of Swayambhunath's iconography
Iconography
Iconography is the branch of art history which studies the identification, description, and the interpretation of the content of images. The word iconography literally means "image writing", and comes from the Greek "image" and "to write". A secondary meaning is the painting of icons in the...
comes from the Vajrayana
Vajrayana
Vajrayāna Buddhism is also known as Tantric Buddhism, Tantrayāna, Mantrayāna, Secret Mantra, Esoteric Buddhism and the Diamond Vehicle...
tradition of Newar Buddhism. However, the complex is also an important site for Buddhists of many schools, and is also revered by Hindus
Hinduism
Hinduism is the predominant and indigenous religious tradition of the Indian Subcontinent. Hinduism is known to its followers as , amongst many other expressions...
.

According to Swayambhu Purana
Swayambhu Purana
Swayambhu Purana is a Buddhist scripture about the origin and development of Kathmandu valley. Swayambhu Purana gives detail of all the Buddhas who came to Kathmandu...
, the entire valley was once filled with an enormous lake, out of which grew a lotus
Nelumbo nucifera
Nelumbo nucifera, known by a number of names including Indian Lotus, Sacred Lotus, Bean of India, or simply Lotus, is a plant in the monogeneric family Nelumbonaceae...
. The valley came to be known as Swayambhu
Swayambhu
Swayambhu means Self-manifested or that which is created by its own accord.-Vaishnavism:Based on details in Bhagavata Purana and Matsya Purana, Narayana or Krishna is said to be the Self-manifested Swayambhu form of Brahman as the first cause of creation...
, meaning "Self-Created." The name comes from an eternal self-existent flame () over which a sūpa was later built.

Swayambhunath is also known as the Monkey Temple as there are holy monkeys living in parts of the temple in the north-west. They are holy because Manjushree, the bodhisattva of wisdom and learning was raising the hill which the Swayambhunath Temple stands on. He was supposed to leave his hair short but he made it grow long and head lice grew. It is said that the head lice had transformed into these monkeys.

The Bodhisatva Manjushri had a vision of the lotus at Swayambhu and traveled there to worship it. Seeing that the valley can be good settlement and to make the site more accessible to human pilgrims, Manjushri cut a gorge at Chovar
Chóvar
Chóvar is a municipality in the comarca of Alto Palancia, Castellón, Valencia, Spain....
. The water drained out of the lake, leaving the valley in which Kathmandu now lies. The lotus was transformed into a hill and the flower become the Swayambhunath stupa.

Swayambhunath, is among the oldest religious sites in Nepal
Nepal
Nepal , officially the Federal Democratic Republic of Nepal, is a landlocked sovereign state located in South Asia. It is located in the Himalayas and bordered to the north by the People's Republic of China, and to the south, east, and west by the Republic of India...
. According to the Swayambhunath was founded by the great-grandfather of King Mānadeva (464-505 CE), , about the beginning of the 5th century CE. This seems to be confirmed by a damaged stone inscription found at the site, which indicates that King Mānadeva ordered work done in 640 CE.

However, Emperor Ashoka is said to have visited the site in the third century BCE and built a temple on the hill which was later destroyed.

Although the site is considered Buddhist, the place is revered by both Buddhists and Hindus. Numerous king Hindu followers are known to have paid their homage to the temple, including Pratap Malla, the powerful king of Kathmandu, who is responsible for the construction of the eastern stairway in the 17th century.

The stupa was completely renovated in May of 2010, its first major renovation in 90 years and its 15th in the nearly 1,500 years since it was built. The dome was re-gilded using 20 kg of gold. The renovation was funded by the Tibetan Nyingma Meditation Center of California, and began in June 2008. 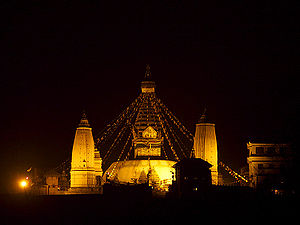 The stupa
Stupa
A stupa is a mound-like structure containing Buddhist relics, typically the remains of Buddha, used by Buddhists as a place of worship....
consists of a dome at the base, above which is a cubical structure painted with eyes of Buddha
Gautama Buddha
Siddhārtha Gautama was a spiritual teacher from the Indian subcontinent, on whose teachings Buddhism was founded. In most Buddhist traditions, he is regarded as the Supreme Buddha Siddhārtha Gautama (Sanskrit: सिद्धार्थ गौतम; Pali: Siddhattha Gotama) was a spiritual teacher from the Indian...
looking in all four directions with the word "unity" in the main Nepali dialect between them . There are pentagonal Toran
Toran
Toran is the name in Hinduism of a sacred or honorific gateway in Buddhist architecture. Its typical form is a projecting cross-piece resting on two uprights or posts...
present above each of the four sides with statues engraved in them. Behind and above the torana there are thirteen tiers. Above all the tiers there is a small space above which the Gajur is present.

The dome at the base represents the entire world. When a person awakes (represented by eyes of wisdom and compassion) from the bonds of the world, the person reaches the state of enlightenment. The thirteen pinnacles on the top symbolize that sentient beings have to go through the thirteen stages of spiritual realizations to reach enlightenment or Buddhahood
Buddhahood
In Buddhism, buddhahood is the state of perfect enlightenment attained by a buddha .In Buddhism, the term buddha usually refers to one who has become enlightened...
.

There is a large pair of eyes onn each of the four sides of the main stupa which represent Wisdom and Compassion. Above each pair of eyes is another eye, the third eye. It is said that when Buddha preaches, cosmic rays emanate from the third eye which act as messages to heavenly beings, so that those interested can come down to earth to listen to the Buddha. The hellish beings and beings below the human realm cannot come to earth to listen to the Buddha's teaching, however, the cosmic rays relieve their suffering when Buddha preaches.

Each morning before dawn hundreds of Buddhist (Vajrayana) and Hindu pilgrims ascend the 365 steps from eastern side that lead up the hill, passing the gilded Vajra (Tibetan: Dorje) and two lions guarding the entrance, and begin a series of clockwise circumambulations of the stupa.