Encyclopedia
Anuradhapura, is one of the ancient capitals of Sri Lanka
Sri Lanka
Sri Lanka, officially the Democratic Socialist Republic of Sri Lanka is a country off the southern coast of the Indian subcontinent. Known until 1972 as Ceylon , Sri Lanka is an island surrounded by the Indian Ocean, the Gulf of Mannar and the Palk Strait, and lies in the vicinity of India and the...
, famous for its well-preserved ruins of ancient Lankan civilization.

The city, now a UNESCO World Heritage Site, lies 205 km north of the current capital Colombo
Colombo
Colombo is the largest city of Sri Lanka. It is located on the west coast of the island and adjacent to Sri Jayawardenapura Kotte, the capital of Sri Lanka. Colombo is often referred to as the capital of the country, since Sri Jayawardenapura Kotte is a satellite city of Colombo...
in Sri Lanka's North Central Province
North Central Province, Sri Lanka
North Central Province is a province of Sri Lanka. Its capital is Anuradhapura. The province is not densely populated with a weak economy, as the land tends to be dry tropical woodlands.-History:...
, on the banks of the historic Malvathu Oya
Malvathu Oya
The Malvathu River is a long river in Sri Lanka, connecting the city of Anuradhapura, which was the capital of the country for over 15 centuries, to the coast of Mannar. It currently ranks as the second longest river in the country, with a great historic significance...
. It is one of the oldest continuously inhabited cities in the world and one of the eight World Heritage Sites of Sri Lanka
World Heritage Sites of Sri Lanka
Eight sites of Sri Lanka have been inscribed in the UNESCO World Heritage, namely, the ancient city of Polonnaruwa , the ancient city of Sigiriya , the Golden Temple of Dambulla , the old town of Galle and its fortifications , the sacred city of Anuradhapura , the sacred city of Kandy , Sinharaja...
.

From the 4th century BC, it was the capital of Sri Lanka until the beginning of the 11th century AD. During this period it remained one of the most stable and durable centers of political power and urban life in South Asia. The ancient city, considered sacred to the Buddhist world, is today surrounded by monasteries covering an area of over sixteen square miles (40 km²).

Protohistoric Iron Age
Although according to historical records the city was founded in the 5th century BC, the archaeological data put the date as far back as the 10th century BC. Very little evidence was available about the period before the 5th century BC (i.e. the protohistoric period), though excavations have revealed information about the earlier inhabitants of the city.

Further excavations in Anuradhapura have uncovered information about the existence of a protohistoric habitation of humans in the citadel. The protohistoric Iron Age which spans from 900 to 600 BC, marked the appearance of iron technology, pottery, the horse, domestic cattle and paddy cultivation. In the time period 700 to 600 BC the settlement in Anuradhapura had grown over an area of at least 50 ha
Hectare
The hectare is a metric unit of area defined as 10,000 square metres , and primarily used in the measurement of land. In 1795, when the metric system was introduced, the are was defined as being 100 square metres and the hectare was thus 100 ares or 1/100 km2...
. The city was strategically situated of major ports northwest and northeast, it was surrounded by irrigable and fertile land. The city was also buried deep in the jungle providing natural defence from invaders.

The layout of Anuradhapura as described in the Mahavansa:

"He laid out four suburbs as well as the Abhaya-tank, the common cemetery, the place of execution, and the chapel of the Queens of the West, the banyan-tree of Vessavana and the Palmyra-palm of the Demon of Maladies, the ground set apart for the Yonas and the house of the Great Sacrifice; all these he laid out near the west gate."

"A hermitage was made for many ascetics; eastward of that same cemetery the ruler built a house for the nigantha Jotiya.(...) On the further side of Jotiya's house and on this side of the Gamani tank he likewise built a monastery for wandering mendicant monks, and a dwelling for the ajivakas and a residence for the brahmans, and in this place and that he built a lying-in shelter and a hall for those recovering from sickness."

It is said that King Pandukabhaya made it his capital in the 4th century BC, and that he also laid out the town and its suburbs according to a well organized plan. He constructed a reservoir named Abhayavapi. He established shrines for yakkhas such as Kalawela and Cittaraja. He housed the Yaksini-Cetiya in the form of a mare within the royal precincts and offerings were made to all these demi-gods every year. He chose the sites for the cemetery and for the place of execution, the Chapel of the Western Queen, the Pacchimarajini, the Vessavana Banyan Tree, the Palm of the Vyadhadeva, the Yona Quarter and the House of the Great Sacrifice. The slaves or Candalas were assigned their duties and a village was set apart for them. They build dwellings for Niganthas, for wandering ascetics and for Ajivakas and Brahmanas. He established, the village boundaries. The tradition that King Pandukabhaya made Anuradhapura the capital city of Sri Lanka
Sri Lanka
Sri Lanka, officially the Democratic Socialist Republic of Sri Lanka is a country off the southern coast of the Indian subcontinent. Known until 1972 as Ceylon , Sri Lanka is an island surrounded by the Indian Ocean, the Gulf of Mannar and the Palk Strait, and lies in the vicinity of India and the...
as early as the fourth century BC had been very important.

The administrative and sanitary arrangements be made for the city and the shrines he provided indicate that over the years the city developed according to an original master plan. His son Mutasiva, succeeded to the throne. During his reign of sixty years, he maintained Anuradhapura as his capital and further laid out the Mahameghavana Garden which was to play an important role in the early history of Buddhism in Sri Lanka. It was in the period of his successor, his son Devanampiya Tissa, that Buddhism was first introduced this island 236 years after the passing away of the Buddha. Emperor Ashoka in India was a contemporary of Devanampiya Tissa. Historically this period is considered to extend from 250 to 210 BC. This is the point at which a kingship began and a civilization developed based on one of the most significant religions of South Asia
South Asia
South Asia, also known as Southern Asia, is the southern region of the Asian continent, which comprises the sub-Himalayan countries and, for some authorities , also includes the adjoining countries to the west and the east...
, Buddhism
Buddhism
Buddhism is a religion and philosophy encompassing a variety of traditions, beliefs and practices, largely based on teachings attributed to Siddhartha Gautama, commonly known as the Buddha . The Buddha lived and taught in the northeastern Indian subcontinent some time between the 6th and 4th...
.

With the introduction of Buddhism, the city gained more prominence and the great building era began. The Mahavansa states that King Kutakannatissa built the first city wall to a height of seven cubit
Cubit
The cubit is a traditional unit of length, based on the length of the forearm. Cubits of various lengths were employed in many parts of the world in Antiquity, in the Middle Ages and into Early Modern Times....
s with a moat in front of the wall. This fortification was further enlarged by raising the wall a further 11 cubits to 18 cubits by King Vasabha. The king also added fortified gatehouses at the entrances of which the ruins can be seen to date. The Mahavamsa also states that soothsayers and architects were consulted in the construction. 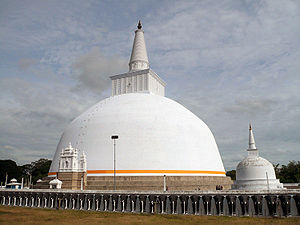 The city's popularity grew both as a ritual centre and as the administrative centre, a large population was attracted to the city for permanent settlement. Thus the living facilities were improved to accommodate the expanding population. King Vasabha constructed many ponds which were fed by a network of subterranean channels which were constructed to supply water to the city. Tissa
Tissa
Tissa may refer to:*Tissa, a Sri Lankan King that ruled from 454 to 437 BC*Tissa Balasuriya, a Sri Lankan Roman Catholic priest and theologian*Tissa Wijeyeratne, a former Sri Lankan barrister, diplomat and businessman....
and Abhayavapi tanks were built, the Nuwara weva was built and the Malwatu Oya was dammed to build the Nachchaduwa wewa which was 4408 acres (17.8 km²) in size.

Parks were also provided in the city. The Ranmasu Uyana below the bund of Tissavapi or Tisa weva was one such, but it was strictly reserved for the members of the royal family. Health care and education were two other aspects to which the authorities paid attention. There were several hospitals in the city. In the fourth century King Upatissa II provided quarters and homes for the crippled and the blind. King Buddhadasa
Buddhadasa
Buddhadasa Bhikkhu was a famous and influential ascetic-philosopher of the 20th century. Known as an innovative reinterpreter of Buddhist doctrine and Thai folk beliefs, Buddhadasa fostered a reformation in conventional religious perceptions in his home country, Thailand, as well as abroad...
(337-365 AD), himself a physician of great repute, appointed a physician to be in charge of every ten villages. For the maintenance of these physicians, one tenth of the income from the fields was set apart. He also set up refuges for the sick in every village. Physicians were also appointed to look after the animals. Kassapa V (914-923 AD) founded a hospital close to the southern gate of Anuradhapura. General Sena in the tenth century is believed to have built a hospital close to the ceremonial street (Managala Veediya). The history of medical care began early, for in the fourth century BC King Pandukhabaya, in the course of sanitizing the town constructed a hospital. A large workforce was entrusted with the task of keeping the city clean.

Large lakes were also constructed by the city's rulers to irrigate paddy lands and also to supply water to the city. Nuwara wewa and Tissa wewa are among the best known lakes in the city.

Anuradhapura attained its highest magnificence about the commencement of the Christian era. The city had some of the most complex irrigation systems of the ancient world, situated in the dry zone of the country the administration built many tanks to irrigate the land. Most of these tanks still survive.


Pictures found in the oldest great city at Anuradhapura excavations

According to carbon dating, the ruins excavated were from the 10th century B.C.

The ruins consist of three classes of buildings, dagobas, monastic buildings, and pokunas. The dagobas are bell-shaped masses of masonry, varying from a few feet to over 1100 ft (340 m) in circumference. Some of them contain enough masonry to build a town for twenty-five thousand inhabitants. Remains of the monastic buildings are to be found in every direction in the shape of raised stone platforms, foundations and stone pillars. The most famous is the Brazen Palace erected by King Dutugamunu about 164 BC. The pokunas are bathing-tanks or tanks for the supply of drinking water, which are scattered everywhere through the jungle. The city also contains a sacred Bo-Tree, which is said to date back to the year 245 BC. 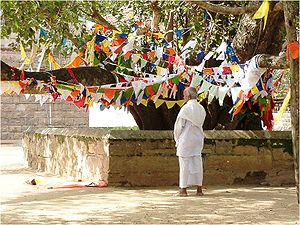 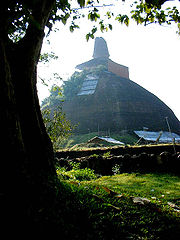