Encyclopedia
Bagan formerly Pagan, is an ancient city in the Mandalay Region of Burma. Formally titled Arimaddanapura or Arimaddana (the City of the Enemy Crusher) and also known as Tambadipa (the Land of Copper) or Tassadessa (the Parched Land), it was the capital of several ancient kingdoms
Monarchy
A monarchy is a form of government in which the office of head of state is usually held until death or abdication and is often hereditary and includes a royal house. In some cases, the monarch is elected...
in Burma. It is located in the dry central plains of the country, on the eastern bank of the Ayeyarwady River
Ayeyarwady River
The Irrawaddy River or Ayeyarwady River is a river that flows from north to south through Burma . It is the country's largest river and most important commercial waterway. Originating from the confluence of the N'mai and Mali rivers, it flows relatively straight North-South before emptying through...
, 90 miles (144.8 km) southwest of Mandalay
Mandalay
Mandalay is the second-largest city and the last royal capital of Burma. Located north of Yangon on the east bank of the Irrawaddy River, the city has a population of one million, and is the capital of Mandalay Region ....
.

The religious buildings of Bagan are often reminiscent of popular architectural styles in the period of their constructions. The most common types are: 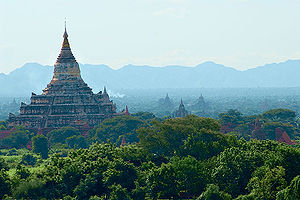 After the earthquake in 1975, there are only 2,217 pagodas left in Bagan, in contrast to more than 5,000 during height of the political centre. Thus in order to preserve the original pagodas, only horse-driven carriage are allowed to travel among the pagodas.

Although an application was submitted, UNESCO
UNESCO
The United Nations Educational, Scientific and Cultural Organization is a specialized agency of the United Nations...
does not designate Bagan as a World Heritage Site
World Heritage Site
A UNESCO World Heritage Site is a place that is listed by the UNESCO as of special cultural or physical significance...
. The main reason given is that the military junta (SPDC
State Peace and Development Council
The State Peace and Development Council was the official name of the military regime of Burma , which seized power in 1988. On 30 March 2011, Senior General Than Shwe signed a decree to officially dissolve the Council....
) has haphazardly restored ancient stupas, temples and buildings, ignoring original architectural styles and using modern materials which bear little or no resemblance to the original designs. The junta has also established a golf course
Golf course
A golf course comprises a series of holes, each consisting of a teeing ground, fairway, rough and other hazards, and a green with a flagstick and cup, all designed for the game of golf. A standard round of golf consists of playing 18 holes, thus most golf courses have this number of holes...
, a paved highway, and built a 200-foot (61 meter) watchtower in the southeastern suburb of Minnanthu.

Apart from the 14 historically documented monarchs who ruled Bagan starting from Anawrahta, The Hmannan Yarzawin
Glass Palace Chronicle
The Glass Palace Chronicle of the kings of Burma is a historical work written in Burmese commissioned by King Bagyidaw in 1829, and compiled by scholars to consolidate and compile all works of the history of Burmese rulers...
provides a list of unverifiable legendary monarchs who continuously ruled the area of Bagan from 107AD - said to be the founding of Bagan by Thamudarit up to Anawrahta's ascension.

† Although Anawrahta
Anawrahta
Anawrahta Minsaw was the founder of the Pagan Empire. Considered the father of the Burmese nation, Anawrahta turned a small principality in the dry zone of Upper Burma into the first Burmese Empire that formed the basis of modern-day Burma...
is accounted for the founding of Bagan, Thamudarit is listed as the "traditional" founder of Bagan in The Glass Palace Chronicle
Glass Palace Chronicle
The Glass Palace Chronicle of the kings of Burma is a historical work written in Burmese commissioned by King Bagyidaw in 1829, and compiled by scholars to consolidate and compile all works of the history of Burmese rulers...
(Hmannan Yazawin).

Luang Prabang
Luang Prabang
Luang Prabang, or Louangphrabang , is a city located in north central Laos, where the Nam Khan river meets the Mekong River about north of Vientiane. It is the capital of Luang Prabang Province...
Siem Reap
Siem Reap
Siem Reap is the capital city of Siem Reap Province in northwestern Cambodia, and is the gateway to Angkor region.Siem Reap has colonial and Chinese-style architecture in the Old French Quarter, and around the Old Market...
, Cambodia
Cambodia
Cambodia , officially known as the Kingdom of Cambodia, is a country located in the southern portion of the Indochina Peninsula in Southeast Asia...
http://www.myanmar.gov.mm/myanmartimes/no192/MyanmarTimes10-192/19202.htm