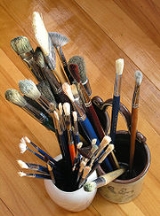 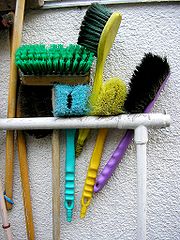 A brush is a tool with bristle
Bristle
A bristle is a stiff hair or feather. Also used are synthetic materials such as nylon in items such as brooms and sweepers. Bristles are often used to make brushes for cleaning uses, as they are strongly abrasive; common examples include the toothbrush and toilet brush...
s, wire or other filaments, used for cleaning, grooming
Personal grooming
Personal grooming is the art of cleaning, grooming, and maintaining parts of the body. It is a species-typical behavior that is controlled by neural circuits in the brain.- In humans :...
hair
Hair
Hair is a filamentous biomaterial, that grows from follicles found in the dermis. Found exclusively in mammals, hair is one of the defining characteristics of the mammalian class....
, make up
Cosmetics
Cosmetics are substances used to enhance the appearance or odor of the human body. Cosmetics include skin-care creams, lotions, powders, perfumes, lipsticks, fingernail and toe nail polish, eye and facial makeup, towelettes, permanent waves, colored contact lenses, hair colors, hair sprays and...
, painting
Painting
Painting is the practice of applying paint, pigment, color or other medium to a surface . The application of the medium is commonly applied to the base with a brush but other objects can be used. In art, the term painting describes both the act and the result of the action. However, painting is...
, surface finishing and for many other purposes. It is one of the most basic and versatile tools known to mankind, and the average household may contain several dozen varieties. It generally consists of a handle or block to which filaments are affixed either parallel- or perpendicular-wise, depending on the way the brush is to be gripped during use. The material of both the block and bristles or filaments is chosen to withstand hazards of its application, such as corrosive chemicals, heat or abrasion.


Manufacturing process of a Brush

A common way of setting the bristles, brush filaments, in the brush is the staple or anchor set brush in which the filament is forced with a staple by the middle into a hole with a special driver and held there by the pressure against all of the walls of the hole and the portions of the staple nailed to the bottom of the hole. The staple can be replaced with a kind of anchor, which is a piece of rectangular profile wire that is anchored to the wall of the hole, like in most toothbrushes. Another way to attach the bristles to the surface can be found in the fused brush, in which instead of being inserted into a hole, a plastic fibre is welded to another plastic surface, giving the option to use different diameters of bristles in the same brush.

Configurations include twisted-in wire (e.g. bottle brushes), cylinders and disks (with bristles spread in one face or radially).


For removal of material (cleaning & polishing)

The action of these brushes is mainly in the tip of each flexible bristle which dislodges particles of matter.


For application of material

The action of these brushes is more akin to combing
Comb
A comb is a toothed device used in hair care for straightening and cleaning hair or other fibres. Combs are among the oldest tools found by archaeologists...
than brushing, that is they are used to straighten and untangle filaments. Certain varieties of hairbrush are however designed to brush the scalp itself free of material such as dead skin (dandruff
Dandruff
Dandruff is the shedding of dead skin cells from the scalp . Dandruff is sometimes caused by frequent exposure to extreme heat and cold. As it is normal for skin cells to die and flake off, a small amount of flaking is normal and common; about 487,000 cells/cm2 get released normally after...
) and to invigorate the skin of the scalp.

Brushes used for cleaning come in various sizes. They vary in size from a that of a toothbrush, to the standard household version accompanied by a dustpan, to 36" deck brushes. There are brushes for cleaning tiny cracks and crevices and brushes for cleaning enormous warehouse floors. Brushes perform a multitude of cleaning tasks. For example, brushes lightly dust the tiniest figurine, they help scrub stains out of clothing and shoes, they remove grime from tires, and they remove the dirt and debris found on floors with the help of a dust pan. Many kinds of specialty brushes are used for cleaning vegetables, cleaning the toilet
Toilet brush
A toilet brush is a domestic implement designed for the cleaning of the lavatory pan. The modern plastic version was invented in 1932 by William C. Schopp of Huntington Park, California, USA and later patented in 1933 by The Addis Brush Company....
, washing glass, finishing tiles, and sanding doors.

Paintbrushes are used for applying ink
Ink
Ink is a liquid or paste that contains pigments and/or dyes and is used to color a surface to produce an image, text, or design. Ink is used for drawing and/or writing with a pen, brush, or quill...
or paint
Paint
Paint is any liquid, liquefiable, or mastic composition which after application to a substrate in a thin layer is converted to an opaque solid film. One may also consider the digital mimicry thereof...
. Paintbrushes are primary used by artists for painted
Painting
Painting is the practice of applying paint, pigment, color or other medium to a surface . The application of the medium is commonly applied to the base with a brush but other objects can be used. In art, the term painting describes both the act and the result of the action. However, painting is...
pictures. A special kind of drawing
Drawing
Drawing is a form of visual art that makes use of any number of drawing instruments to mark a two-dimensional medium. Common instruments include graphite pencils, pen and ink, inked brushes, wax color pencils, crayons, charcoal, chalk, pastels, markers, styluses, and various metals .An artist who...
is the so called paintbrush-drawing, drawings only done with paintbrushes instead of pencil or pen.

These brushes are usually made by clamping the bristles to a handle with a ferrule
Ferrule
A ferrule is a name for types of metal objects, generally used for fastening, joining, or reinforcement...
.

The sizes of brushes used for painting and decorating
Decorator
Decorator can refer to:*a house painter and decorator*Interior decoration*Decorator pattern in object-oriented programming*Function decorators, in Python*The Decorator, a 1920 film starring Oliver Hardy...
are given in mm or inches, referring to the width of the head.

Bristles may be natural or synthetic. If the filaments are synthetic, they could be made of polyester, nylon or a blend of nylon and polyester.
Filaments can be hollow or solid and can be tapered or untapered. Brushes with tapered filaments give a smoother finish. http://www.attamark.com/why2.php

A decorator judges the quality of a brush based on several factors: filament retention, paint pickup, steadiness of paint release, brush marks, drag and precision painting. A chiseled brush permits the painter to cut into tighter corners and paint more precisely. http://www.attamark.com/why2.php

Handles may be wood or plastic; ferrules are metal (usually nickel
Nickel
Nickel is a chemical element with the chemical symbol Ni and atomic number 28. It is a silvery-white lustrous metal with a slight golden tinge. Nickel belongs to the transition metals and is hard and ductile...
-plated steel
Steel
Steel is an alloy that consists mostly of iron and has a carbon content between 0.2% and 2.1% by weight, depending on the grade. Carbon is the most common alloying material for iron, but various other alloying elements are used, such as manganese, chromium, vanadium, and tungsten...
). 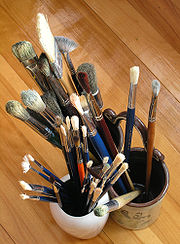 The styles of brush tip seen most commonly are:

Some other styles of brush include:

Artist
Artist
An artist is a person engaged in one or more of any of a broad spectrum of activities related to creating art, practicing the arts and/or demonstrating an art. The common usage in both everyday speech and academic discourse is a practitioner in the visual arts only...
s' brushes are usually given numbered sizes, although there is no exact standard for their physical dimensions.

From smallest to largest, the sizes are:

Turpentine
Turpentine
Turpentine is a fluid obtained by the distillation of resin obtained from trees, mainly pine trees. It is composed of terpenes, mainly the monoterpenes alpha-pinene and beta-pinene...
or thinner
Paint thinner
A paint thinner is a solvent used to thin oil-based paints or clean up after their use, although all such solvents have other uses. Commercially, "paint thinner" is usually a name for mineral spirits.Products used as paint thinners include:*Mineral spirits...
s used in oil painting can destroy some types of synthetic brushes. However, innovations in synthetic bristle technology have produced solvent resistant synthetic bristles suitable for use in all media. Natural hair, squirrel, badger or sable are used by watercolorists due to their superior ability to absorb and hold water.

Bristles may be natural — either soft hair or hog
Domestic pig
The domestic pig is a domesticated animal that traces its ancestry to the wild boar, and is considered a subspecies of the wild boar or a distinct species in its own right. It is likely the wild boar was domesticated as early as 13,000 BC in the Tigris River basin...
bristle — or synthetic.

Artists' brush handles are commonly wood
Wood
Wood is a hard, fibrous tissue found in many trees. It has been used for hundreds of thousands of years for both fuel and as a construction material. It is an organic material, a natural composite of cellulose fibers embedded in a matrix of lignin which resists compression...
en but can also be made of molded plastic
Plastic
A plastic material is any of a wide range of synthetic or semi-synthetic organic solids used in the manufacture of industrial products. Plastics are typically polymers of high molecular mass, and may contain other substances to improve performance and/or reduce production costs...
. Many mass-produced handles are made of unfinished raw wood; better quality handles are of seasoned hardwood. The wood is sealed and lacquer
Lacquer
In a general sense, lacquer is a somewhat imprecise term for a clear or coloured varnish that dries by solvent evaporation and often a curing process as well that produces a hard, durable finish, in any sheen level from ultra matte to high gloss and that can be further polished as required...
ed to give the handle a high-gloss, waterproof finish that reduces soiling and swelling.

Metal ferrules may be of aluminum, nickel
Nickel
Nickel is a chemical element with the chemical symbol Ni and atomic number 28. It is a silvery-white lustrous metal with a slight golden tinge. Nickel belongs to the transition metals and is hard and ductile...
, copper
Copper
Copper is a chemical element with the symbol Cu and atomic number 29. It is a ductile metal with very high thermal and electrical conductivity. Pure copper is soft and malleable; an exposed surface has a reddish-orange tarnish...
, or nickel-plated steel
Steel
Steel is an alloy that consists mostly of iron and has a carbon content between 0.2% and 2.1% by weight, depending on the grade. Carbon is the most common alloying material for iron, but various other alloying elements are used, such as manganese, chromium, vanadium, and tungsten...
. Quill
Quill
A quill pen is a writing implement made from a flight feather of a large bird. Quills were used for writing with ink before the invention of the dip pen, metal-nibbed pens, the fountain pen, and, eventually, the ballpoint pen...
ferrules are also found: these give a different "feel" to the brush.