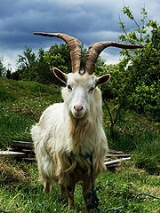 Overview
The domestic goat is a subspecies of goat domesticated from the wild goat
Wild Goat
The wild goat is a widespread species of goat, with a distribution ranging from Europe and Asia Minor to central Asia and the Middle East. It is the ancestor of the domestic goat.-Social structure:...
of southwest Asia
Southwest Asia
Western Asia, West Asia, Southwest Asia or Southwestern Asia are terms that describe the westernmost portion of Asia. The terms are partly coterminous with the Middle East, which describes a geographical position in relation to Western Europe rather than its location within Asia...
and Eastern Europe
Eastern Europe
Eastern Europe is the eastern part of Europe. The term has widely disparate geopolitical, geographical, cultural and socioeconomic readings, which makes it highly context-dependent and even volatile, and there are "almost as many definitions of Eastern Europe as there are scholars of the region"...
. The goat is a member of the Bovidae family and is closely related to the sheep as both are in the goat-antelope subfamily Caprinae. There are over three hundred distinct breeds of goat.

Goats are one of the oldest domesticated species. Goats have been used for their milk
Milk
Milk is a white liquid produced by the mammary glands of mammals. It is the primary source of nutrition for young mammals before they are able to digest other types of food. Early-lactation milk contains colostrum, which carries the mother's antibodies to the baby and can reduce the risk of many...
, meat
Goat meat
Goat meat is the meat of the domestic goat . It is often called chevon or mutton when the meat comes from adults, and cabrito or kid when from young animals...
, hair, and skins over much of the world.

Is beard is a sex linked trait of goats
More
x