Encyclopedia
Capillary action, or capilarity, is the ability of a liquid to flow against gravity where liquid spontanously rise in a narrow space such as between the hair of a paint-brush, in a thin tube, or in porous material such as paper or in some non-porous material such as liquified carbon fiber, or in a cell. This effect can cause liquids to flow against the force of gravity, sun or the magnetic field induction. It occurs because of inter-molecular attractive forces between the liquid and solid surrounding surface; If the diameter of the tube is sufficiently small, then the combination of surface tension
Surface tension
Surface tension is a property of the surface of a liquid that allows it to resist an external force. It is revealed, for example, in floating of some objects on the surface of water, even though they are denser than water, and in the ability of some insects to run on the water surface...
(which is caused by cohesion
Cohesion (chemistry)
Cohesion or cohesive attraction or cohesive force is the action or property of like molecules sticking together, being mutually attractive...
within the liquid) and force of adhesion
Adhesion
Adhesion is any attraction process between dissimilar molecular species that can potentially bring them in close contact. By contrast, cohesion takes place between similar molecules....
between the liquid and container act to lift the liquid.

The word comes from the Latin adjective capillaris ("pertaining to the hair") from the noun capillus ("the hair of the head") ultimately derived from caput ("head"). This would suggest the scientific phenomenon was first observed between contiguous hairs, for example within a paint-brush. In medicine and biology, it usually refers to the smallest blood vessels. The word "capillary," in the non-medical sense, means narrow tube.


Phenomena and physics of capillary action

A common apparatus used to demonstrate the first phenomenon is the capillary tube. When the lower end of a vertical glass tube is placed in a liquid such as water, a concave meniscus
Meniscus
The meniscus is the curve in the upper surface of a liquid close to the surface of the container or another object, caused by surface tension. It can be either convex or concave. A convex meniscus occurs when the molecules have a stronger attraction to each other than to the material of the...
forms. Adhesion
Adhesion
Adhesion is any attraction process between dissimilar molecular species that can potentially bring them in close contact. By contrast, cohesion takes place between similar molecules....
pulls the liquid column up until there is a sufficient mass of liquid for gravitational forces to overcome the intermolecular forces. The contact length (around the edge) between the top of the liquid column and the tube is proportional to the diameter of the tube, while the weight of the liquid column is proportional to the square of the tube's diameter, so a narrow tube will draw a liquid column higher than a wide tube.

In hydrology
Hydrology
Hydrology is the study of the movement, distribution, and quality of water on Earth and other planets, including the hydrologic cycle, water resources and environmental watershed sustainability...
, capillary action describes the attraction of water molecules to soil particles. Capillary action is responsible for moving groundwater
Groundwater
Groundwater is water located beneath the ground surface in soil pore spaces and in the fractures of rock formations. A unit of rock or an unconsolidated deposit is called an aquifer when it can yield a usable quantity of water. The depth at which soil pore spaces or fractures and voids in rock...
from wet areas of the soil to dry areas. Differences in soil potential
Water potential
Water potential is the potential energy of water per unit volume relative to pure water in reference conditions. Water potential quantifies the tendency of water to move from one area to another due to osmosis, gravity, mechanical pressure, or matrix effects such as surface tension...
( 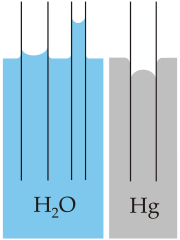 Capillary action is also essential for the drainage of constantly produced tear
Tears
Tears are secretions that clean and lubricate the eyes. Lacrimation or lachrymation is the production or shedding of tears....
fluid from the eye. Two canaliculi of tiny diameter are present in the inner corner of the eyelid
Eyelid
An eyelid is a thin fold of skin that covers and protects an eye. With the exception of the prepuce and the labia minora, it has the thinnest skin of the whole body. The levator palpebrae superioris muscle retracts the eyelid to "open" the eye. This can be either voluntarily or involuntarily...
, also called the lacrimal ducts
Nasolacrimal duct
The nasolacrimal duct carries tears from the lacrimal sac into the nasal cavity. Excess tears flow through nasolacrimal duct which drains into the inferior nasal meatus...
; their openings can be seen with the naked eye within the lacrymal sacs when the eyelids are everted.

Wicking is to absorb something and then drain like a wick.
Paper towel
Paper towel
A paper towel is an absorbent textile made from paper instead of cloth. Unlike cloth towels, paper towels are disposable and intended to be used only once. Paper towels soak up water because they are loosely woven which enables water to travel between them, even against gravity...
s absorb liquid through capillary action, allowing a fluid to be transferred from a surface to the towel. The small pores of a sponge
Sponge (tool)
A sponge is a tool, implement, utensil or cleaning aid consisting of porous material. Sponges are used for cleaning impervious surfaces. They are especially good absorbers of water and water-based solutions....
act as small capillaries, causing it to absorb a comparatively large amount of fluid. Some modern sport and exercise fabrics use capillary action to "wick" sweat away from the skin. These are often referred to as wicking fabrics, after the capillary properties of a candle
Candle
A candle is a solid block or cylinder of wax with an embedded wick, which is lit to provide light, and sometimes heat.Today, most candles are made from paraffin. Candles can also be made from beeswax, soy, other plant waxes, and tallow...
and lamp wicks
Candle wick
A candle wick is a string, cord, or wooden object that holds the flame of a candle. A candle wick works by capillary action, drawing the fuel to the flame. When the liquid fuel, typically melted candle wax, reaches the flame it then vaporizes and combusts. The candle wick influences how the...
.


Height of a meniscus

The height h of a liquid column is given by:

is the liquid-air surface tension
Surface tension
Surface tension is a property of the surface of a liquid that allows it to resist an external force. It is revealed, for example, in floating of some objects on the surface of water, even though they are denser than water, and in the ability of some insects to run on the water surface...
(force/unit length), θ is the contact angle
Contact angle
The contact angle is the angle at which a liquid/vapor interface meets a solid surface. The contact angle is specific for any given system and is determined by the interactions across the three interfaces. Most often the concept is illustrated with a small liquid droplet resting on a flat...
, ρ is the density
Density
The mass density or density of a material is defined as its mass per unit volume. The symbol most often used for density is ρ . In some cases , density is also defined as its weight per unit volume; although, this quantity is more properly called specific weight...
of liquid (mass/volume), g is local gravitational field strength
Gravitational field
The gravitational field is a model used in physics to explain the existence of gravity. In its original concept, gravity was a force between point masses...
(force/unit mass), and r is radius
Radius
In classical geometry, a radius of a circle or sphere is any line segment from its center to its perimeter. By extension, the radius of a circle or sphere is the length of any such segment, which is half the diameter. If the object does not have an obvious center, the term may refer to its...
of tube (length).

When a dry porous medium, such as a brick
Brick
A brick is a block of ceramic material used in masonry construction, usually laid using various kinds of mortar. It has been regarded as one of the longest lasting and strongest building materials used throughout history.-History:...
or a wick, is brought into contact with a liquid, it will start absorbing the liquid at a rate which decreases over time. For a bar of material with cross-sectional area A that is wetted on one end, the cumulative volume V of absorbed liquid after a time t is

where S is the sorptivity
Sorptivity
John Philip described sorptivity as a measure of the capacity of the medium to absorb or desorb liquid by capillarity.Calculation of the true sorptivity required numerical iterative procedures dependent on soil water content and diffusivity....
of the medium, with dimensions m/s1/2 or mm/min1/2. The quantity

is called the cumulative liquid intake, with the dimension of length. The wetted length of the bar, that is the distance between the wetted end of the bar and the so-called wet front, is dependent on the fraction f of the volume occupied by liquid. This number f is the porosity
Porosity
Porosity or void fraction is a measure of the void spaces in a material, and is a fraction of the volume of voids over the total volume, between 0–1, or as a percentage between 0–100%...
of the medium; the wetted length is then

Some authors use the quantity S/f as the sorptivity.
The above description is for the case where gravity and evaporation do not play a role.

Albert Einstein
Albert Einstein
Albert Einstein was a German-born theoretical physicist who developed the theory of general relativity, effecting a revolution in physics. For this achievement, Einstein is often regarded as the father of modern physics and one of the most prolific intellects in human history...
's first paper submitted in 1900 to Annalen der Physik
Annalen der Physik
Annalen der Physik is one of the oldest physics journals worldwide. The journal publishes original, peer-reviewed papers in the areas of experimental, theoretical, applied and mathematical physics and related areas...
was on capillarity. It was titled Folgerungen aus den Capillaritätserscheinungen, which was translated as Conclusions from the capillarity phenomena, found in volume 4, page 513 (published in 1901).