Brompton Cemetery is located near Earl's Court in South West London, England (postal districts SW 5 and 10). It is managed by The Royal Parks
The Royal Parks
The Royal Parks is an organisation within the UK Government that manages the eight Royal Parks and certain other areas of garden and parkland in London.They are an executive agency of the Department for Culture, Media and Sport...
and is one of the Magnificent Seven
Magnificent Seven, London
The "Magnificent Seven" is an informal term applied to seven large cemeteries in London. They were established in the 19th century to alleviate overcrowding in existing parish burial grounds.-Background:...
. Established by Act of Parliament, it opened in 1840 and was originally known as the West of London and Westminster Cemetery.

Brompton Cemetery, consecrated by the Bishop of London
Bishop of London
The Bishop of London is the ordinary of the Church of England Diocese of London in the Province of Canterbury.The diocese covers 458 km² of 17 boroughs of Greater London north of the River Thames and a small part of the County of Surrey...
in June 1840, is one of the Britain's oldest and most distinguished garden cemeteries. While the cemetery is still open for occasional new burials, today more people use it as a public park than as a place for mourning the dead. 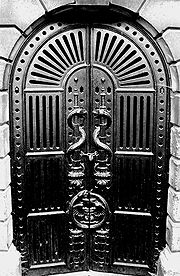 The cemetery was one of seven large, modern cemeteries founded by private companies in the mid-19th century (sometimes called the 'Magnificent Seven
Magnificent Seven, London
The "Magnificent Seven" is an informal term applied to seven large cemeteries in London. They were established in the 19th century to alleviate overcrowding in existing parish burial grounds.-Background:...
') forming a ring around the edge of London
London
London is the capital city of :England and the :United Kingdom, the largest metropolitan area in the United Kingdom, and the largest urban zone in the European Union by most measures. Located on the River Thames, London has been a major settlement for two millennia, its history going back to its...
. The inner city burial grounds, mostly churchyards, had long been unable to cope with the number of burials and were seen as a hazard to health and an undignified way to treat the dead.

Brompton Cemetery was designed by Benjamin Baud and has at its centre a modest domed chapel (in the style of the basilica of St. Peter's in Rome) at it southern end, reached by long colonnades, and flanked by catacombs. The chapel is dated 1839. The site, previously market gardens, was bought from Lord Kensington
William Edwardes, 2nd Baron Kensington
William Edwardes, 2nd Baron Kensington , was a British peer and Member of Parliament.Kensington was the son of William Edwardes, 1st Baron Kensington, who represented Haverfordwest in the House of Commons for over 50 years...
and is 39 acres (157,827.5 m²) in area. The cemetery is designed to give the feel of a large open air cathedral. It is rectangular in shape with the north end pointing to the northwest and the south end to the southeast. It has a central “nave” which runs from Old Brompton Road
Old Brompton Road
Old Brompton Road is a major street in the South Kensington district of The Royal Borough of Kensington and Chelsea, London.It starts from South Kensington tube station and runs south-west, through a mainly residential area, until it reaches West Brompton and the area around Earl's Court tube station...
towards the central colonnade and chapel. Below the colonnades are catacombs which were originally conceived as a cheaper alternative burial to having a plot in the grounds of the cemetery. Unfortunately, the catacombs were not a success and only about 500 of the many thousands of places in them were sold. There is also an entrance on the south side from the Fulham Road
Fulham Road
Fulham Road is a street in London, England, that runs from the A219 road in right in the centre of Fulham, in the London Borough of Hammersmith and Fulham, through Chelsea to Brompton Road Knightsbridge and the A4 in Brompton, in the Royal Borough of Kensington and Chelsea.Fulham Road runs parallel...
. The Metropolitan Interments Act 1850 gave the government powers to purchase commercial cemeteries. The shareholders of the cemetery were relieved to be able to sell their shares as the cost of building the cemetery had over run and they had seen little return on their investment.

Beatrix Potter
Beatrix Potter
Helen Beatrix Potter was an English author, illustrator, natural scientist and conservationist best known for her imaginative children’s books featuring animals such as those in The Tale of Peter Rabbit which celebrated the British landscape and country life.Born into a privileged Unitarian...
, who lived in The Boltons nearby, took the names of many of her animal characters from tombstones in the cemetery and it is said that Mr. McGregor's walled garden was based on the colonnades. Names on headstones included Mr. Nutkins, Mr. McGregor, a Tod (with that unusual single 'd' spelling), Jeremiah Fisher, Tommy Brock - and even a Peter Rabbett.

The cemetery is today a cruising ground
Cruising for sex
Cruising for sex, or cruising is the act of walking or driving about a locality in search of a sex partner, usually of the anonymous, casual, one-time variety...
popular with West London's gay men scene.

Brompton Cemetery has featured in a number of films, including David Cronenberg
David Cronenberg
David Paul Cronenberg, OC, FRSC is a Canadian filmmaker, screenwriter and actor. He is one of the principal originators of what is commonly known as the body horror or venereal horror genre. This style of filmmaking explores people's fears of bodily transformation and infection. In his films, the...
's Eastern Promises (starring Viggo Mortensen
Viggo Mortensen
Viggo Peter Mortensen, Jr. is a Danish-American actor, poet, musician, photographer and painter. He made his film debut in Peter Weir's 1985 thriller Witness, and subsequently appeared in many notable films of the 1990s, including The Indian Runner , Carlito's Way , Crimson Tide , Daylight , The...
), The Wisdom of Crocodiles
The Wisdom of Crocodiles
The Wisdom of Crocodiles is a 1998 romantic thriller by Po-Chih Leong starring Jude Law. It is based on the book of the same name by Paul Hoffman.-Cast:Jude Law - Steven Grlscz Elina Löwensohn - Anne Levels...
(Jude Law
Jude Law
David Jude Heyworth Law , known professionally as Jude Law, is an English actor, film producer and director.He began acting with the National Youth Music Theatre in 1987, and had his first television role in 1989...
), Guy Ritchie's Sherlock Holmes (2009 film)
Sherlock Holmes (2009 film)
Sherlock Holmes is a 2009 action-mystery film based on the character of the same name created by Sir Arthur Conan Doyle. The film was directed by Guy Ritchie and produced by Joel Silver, Lionel Wigram, Susan Downey and Dan Lin. The screenplay by Michael Robert Johnson, Anthony Peckham and Simon...
(also with Jude Law) as the location of 'Lord Blackwood's Tomb', Crush (Imelda Staunton
Imelda Staunton
Imelda Mary Philomena Bernadette Staunton, OBE is an English actress. She is perhaps best known for her performances in the British comedy television series Up the Garden Path, the Harry Potter film series and Vera Drake...
and Andie MacDowell
Andie MacDowell
Rosalie Anderson "Andie" MacDowell is an American model and actress. She has received the Golden Camera and an Honorary César.-Early life:...
), Stormbreaker (starring Alex Pettyfer
Alex Pettyfer
Alexander Richard "Alex" Pettyfer is an English actor and model. He appeared in school plays and on television before being cast as Alex Rider, the main character in the 2006 film version of Stormbreaker. Pettyfer was nominated for a Young Artist Award and an Empire Award for his role. He has been...
, Ewan McGregor
Ewan McGregor
Ewan Gordon McGregor is a Scottish actor. He has had success in mainstream, indie, and art house films. McGregor is perhaps best known for his roles as heroin addict Mark Renton in the drama Trainspotting , young Jedi Obi-Wan Kenobi in the Star Wars prequel trilogy , and poet Christian in the...
, Stephen Fry
Stephen Fry
Stephen John Fry is an English actor, screenwriter, author, playwright, journalist, poet, comedian, television presenter and film director, and a director of Norwich City Football Club. He first came to attention in the 1981 Cambridge Footlights Revue presentation "The Cellar Tapes", which also...
and Mickey Rourke
Mickey Rourke
Philip Andre "Mickey" Rourke, Jr. is an American actor, screenwriter and retired boxer, who has appeared primarily as a leading man in action, drama, and thriller films....
), Finding Neverland
Finding Neverland
Finding Neverland is a 2004 semi-biographical film about playwright J. M. Barrie and his relationship with a family who inspired him to create Peter Pan, directed by Marc Forster. The screenplay by David Magee is based on the play The Man Who Was Peter Pan by Allan Knee...
(starring Johnny Depp
Johnny Depp
John Christopher "Johnny" Depp II is an American actor, producer and musician. He has won the Golden Globe Award and Screen Actors Guild award for Best Actor. Depp rose to prominence on the 1980s television series 21 Jump Street, becoming a teen idol...
and Kate Winslet
Kate Winslet
Kate Elizabeth Winslet is an English actress and occasional singer. She has received multiple awards and nominations. She was the youngest person to accrue six Academy Award nominations, and won the Academy Award for Best Actress for The Reader...
) and Johnny English
Johnny English
Johnny English is a 2003 British action comedy film parodying the James Bond secret agent genre. The film stars Rowan Atkinson as the incompetent titular English spy, with John Malkovich, Natalie Imbruglia, Tim Pigott-Smith and Ben Miller in supporting roles...
(starring Rowan Atkinson
Rowan Atkinson
Rowan Sebastian Atkinson is a British actor, comedian, and screenwriter. He is most famous for his work on the satirical sketch comedy show Not The Nine O'Clock News, and the sitcoms Blackadder, Mr. Bean and The Thin Blue Line...
); as well as being used as a location by photographers such as Bruce Weber
Bruce Weber (photographer)
Bruce Weber is an American fashion photographer and occasional filmmaker. He is most widely known for his ad campaigns for Calvin Klein, Ralph Lauren, Pirelli, Abercrombie & Fitch, Revlon, and Gianni Versace, as well as his work for Vogue, GQ, Vanity Fair, Elle, Life, Interview, and Rolling Stone...
(see "The Chop Suey Club"). 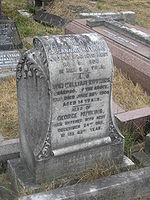 Famous occupants of the cemetery include:

The American Sioux Indian chief, Long Wolf, a veteran of the Sioux wars was buried here on June 13, 1892 having died age 59 of bronchial pneumonia while taking part in the European tour of Buffalo Bill's Wild West Show. He shared the grave with a 17 month old Indian girl named Star Ghost Dog believed to have fallen from her mother's arms while on horseback. 105 years later a British woman named Elizabeth Knight traced his family and campaigned with them to have his remains returned to the land of his birth. In 1997, Chief Long Wolf was finally moved to a new plot in the Wolf Creek Community Cemetery (ancestral burial ground of the Oglala Sioux tribe) at Pine Ridge, South Dakota.
His great grandson John Black Feather said "Back then, they had burials at sea, they did ask his wife if she wanted to take him home and she figured that as soon as they hit the water they would throw him overboard, so that's why they left him here."

Brompton Cemetery is one of the Magnificent Seven
Magnificent Seven, London
The "Magnificent Seven" is an informal term applied to seven large cemeteries in London. They were established in the 19th century to alleviate overcrowding in existing parish burial grounds.-Background:...
cemeteries, and is adjacent to Stamford Bridge, the home ground of Chelsea Football Club.