The diocese covers 458 km² (177 sq. mi.) of 17 boroughs of Greater London
Greater London
Greater London is the top-level administrative division of England covering London. It was created in 1965 and spans the City of London, including Middle Temple and Inner Temple, and the 32 London boroughs. This territory is coterminate with the London Government Office Region and the London...
north of the River Thames (historically the County of Middlesex
Middlesex
Middlesex is one of the historic counties of England and the second smallest by area. The low-lying county contained the wealthy and politically independent City of London on its southern boundary and was dominated by it from a very early time...
) and a small part of the County of Surrey
Surrey
Surrey is a county in the South East of England and is one of the Home Counties. The county borders Greater London, Kent, East Sussex, West Sussex, Hampshire and Berkshire. The historic county town is Guildford. Surrey County Council sits at Kingston upon Thames, although this has been part of...
. The see
Episcopal See
An episcopal see is, in the original sense, the official seat of a bishop. This seat, which is also referred to as the bishop's cathedra, is placed in the bishop's principal church, which is therefore called the bishop's cathedral...
is in the City of London
City of London
The City of London is a small area within Greater London, England. It is the historic core of London around which the modern conurbation grew and has held city status since time immemorial. The City’s boundaries have remained almost unchanged since the Middle Ages, and it is now only a tiny part of...
where the seat is located at the Cathedral Church of Saint Paul
St Paul's Cathedral
St Paul's Cathedral, London, is a Church of England cathedral and seat of the Bishop of London. Its dedication to Paul the Apostle dates back to the original church on this site, founded in AD 604. St Paul's sits at the top of Ludgate Hill, the highest point in the City of London, and is the mother...
which was founded as a cathedral in 604 and was rebuilt from 1675 following the Great Fire of London
Great Fire of London
The Great Fire of London was a major conflagration that swept through the central parts of the English city of London, from Sunday, 2 September to Wednesday, 5 September 1666. The fire gutted the medieval City of London inside the old Roman City Wall...
(1666).

The bishop's residence is The Old Deanery, Dean's Court, London. Previously, for over a 1000 years, Fulham Palace
Fulham Palace
Fulham Palace in Fulham, London , England, at one time the main residence of the Bishop of London, is of medieval origin. It was the country home of the Bishops of London from at least 11th century until 1975, when it was vacated...
was the residence although, from the 18th century, London House next to the Bishop's Chapel in Aldersgate
Aldersgate
Aldersgate was a gate in the London Wall in the City of London, which has given its name to a ward and Aldersgate Street, a road leading north from the site of the gate, towards Clerkenwell in the London Borough of Islington.-History:...
Street was where he had his chambers.

The current and 132nd Bishop of London is the Right Reverend and Right Honourable Richard John Carew Chartres
Richard Chartres
Richard John Carew Chartres KCVO FSA is the current Bishop of London, a position he has held since 1995. Before this appointment, he was Bishop of Stepney and Gresham Professor of Divinity .-Early life:...
, who was installed on 26 January 1996 and who signs Richard Londin. 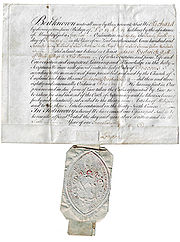 Because the bishop's diocese includes the royal palaces and the seat of government at Westminster
Palace of Westminster
The Palace of Westminster, also known as the Houses of Parliament or Westminster Palace, is the meeting place of the two houses of the Parliament of the United Kingdom—the House of Lords and the House of Commons...
, he has been regarded as the "King's bishop" and has historically had considerable influence with members of the Royal Family and leading politicians of the day. Since 1748 it has been customary to appoint the Bishop of London to the post of Dean of the Chapel Royal
Dean of the Chapel Royal
Dean of the Chapel Royal, in any kingdom, can be the title of an official charged with oversight of that kingdom's Chapel Royal, the ecclesiastical establishment which is part of the Royal Household and ministers to it.-England:...
, which has the amusing effect of putting under the bishop's jurisdiction, as dean, several chapels (at the Tower of London
Tower of London
Her Majesty's Royal Palace and Fortress, more commonly known as the Tower of London, is a historic castle on the north bank of the River Thames in central London, England. It lies within the London Borough of Tower Hamlets, separated from the eastern edge of the City of London by the open space...
and St. James's Palace
St. James's Palace
St. James's Palace is one of London's oldest palaces. It is situated in Pall Mall, just north of St. James's Park. Although no sovereign has resided there for almost two centuries, it has remained the official residence of the Sovereign and the most senior royal palace in the UK...
, among others) which are geographically in the Diocese of London but, as royal peculiars, are specifically outside the bishop's jurisdiction as bishop.

The recorded antiquity of the office dates back to the Roman province
Roman Britain
Roman Britain was the part of the island of Great Britain controlled by the Roman Empire from AD 43 until ca. AD 410.The Romans referred to the imperial province as Britannia, which eventually comprised all of the island of Great Britain south of the fluid frontier with Caledonia...
of Britannia
Britannia
Britannia is an ancient term for Great Britain, and also a female personification of the island. The name is Latin, and derives from the Greek form Prettanike or Brettaniai, which originally designated a collection of islands with individual names, including Albion or Great Britain. However, by the...
when 16 named bishops are listed by Jocelyne of Furness in his work Bishops. Stowe noted that this was the sole available source of these names. However, the earlier of the two bishops named Restitutus in the work was alive in 314, the year in which he was named as attending the Council of Arles. The Saxon bishopric of which the present diocese is the direct successor was established in 604 by Mellitus
Mellitus
Mellitus was the first Bishop of London in the Saxon period, the third Archbishop of Canterbury, and a member of the Gregorian mission sent to England to convert the Anglo-Saxons from their native paganism to Christianity. He arrived in 601 AD with a group of clergymen sent to augment the mission,...
, the same year as St Paul's Cathedral
St Paul's Cathedral
St Paul's Cathedral, London, is a Church of England cathedral and seat of the Bishop of London. Its dedication to Paul the Apostle dates back to the original church on this site, founded in AD 604. St Paul's sits at the top of Ludgate Hill, the highest point in the City of London, and is the mother...
(and also the Diocese of Rochester) were founded.