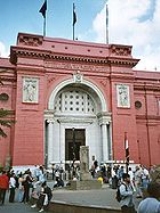 Encyclopedia
The Museum of Egyptian Antiquities, known commonly as the Egyptian Museum, in Cairo
Cairo
Cairo , is the capital of Egypt and the largest city in the Arab world and Africa, and the 16th largest metropolitan area in the world. Nicknamed "The City of a Thousand Minarets" for its preponderance of Islamic architecture, Cairo has long been a centre of the region's political and cultural life...
, Egypt
Egypt
Egypt , officially the Arab Republic of Egypt, Arabic: , is a country mainly in North Africa, with the Sinai Peninsula forming a land bridge in Southwest Asia. Egypt is thus a transcontinental country, and a major power in Africa, the Mediterranean Basin, the Middle East and the Muslim world...
, is home to an extensive collection of ancient Egypt
Ancient Egypt
Ancient Egypt was an ancient civilization of Northeastern Africa, concentrated along the lower reaches of the Nile River in what is now the modern country of Egypt. Egyptian civilization coalesced around 3150 BC with the political unification of Upper and Lower Egypt under the first pharaoh...
ian antiquities. It has 120,000 items, with a representative amount on display, the remainder in storerooms.

The following information pertains to the state of the museum prior to the Egyptian Revolution of 2011. The museum's Royal Mummy Room, containing 27 royal mummies from Pharao
Pharao
Pharao was a German Eurodance act, produced by Alexander Hawking and DJ Stevie Steve. The band was fronted by singer Kyra Pharao and the American rapper Deon Blue...
nic times, was closed on the orders of President Anwar Sadat
Anwar Sadat
Muhammad Anwar al-Sadat was the third President of Egypt, serving from 15 October 1970 until his assassination by fundamentalist army officers on 6 October 1981...
in 1981. It was reopened, with a slightly curtailed display of New Kingdom
New Kingdom
The New Kingdom of Egypt, also referred to as the Egyptian Empire is the period in ancient Egyptian history between the 16th century BC and the 11th century BC, covering the Eighteenth, Nineteenth, and Twentieth Dynasties of Egypt....
kings and queens in 1985. Today, there are about 9 mummies displayed. One of them is the newly discovered mummy of Queen Hatshepsut.

The Egyptian Museum of Antiquities contains many important pieces of ancient Egyptian history. It houses the world’s largest collection of Pharaonic antiquities, and many treasures of King Tutankhamen. The Egyptian government established the museum, built in 1835 near the Ezbekeyah Garden. The museum soon moved to Boulaq in 1858 because the original building was getting to be too small to hold all of the artifacts. In 1855, shortly after the artifacts were moved, Duke Maximilian of Austria
Austria
Austria , officially the Republic of Austria , is a landlocked country of roughly 8.4 million people in Central Europe. It is bordered by the Czech Republic and Germany to the north, Slovakia and Hungary to the east, Slovenia and Italy to the south, and Switzerland and Liechtenstein to the...
was given all of the artifacts. He hired a French architect to design and construct a new museum for the antiquities. The new building was to be constructed on the bank of the Nile River in Boulaq
Boulaq
Boulaq is a district of Cairo, Egypt. It neighbours Downtown Cairo, Azbakeya, and the River Nile.The name Boulaq comes from the French 'Bon Lac', which literally means 'Good Lake'. The name was arabised into Bolaq, which in Egyptian dialect is pronounced 'Bolaa'.-History:Following the Baybars’s...
. In 1878, after the museum has been completed for some time, it suffered some irreversible damage; a flood of the Nile River caused the antiquities to be relocated to another museum, in Giza. The artifacts remained there until 1902 when they were moved, for the last time, to the current museum in Tahrir Square. During the Egyptian Revolution of 2011, the museum was broken into, and two mummies were reportedly destroyed. Several artifacts were also shown to have been damaged.

There are two main floors in the museum, the ground floor and the first floor. On the ground floor there is an extensive collection of papyrus and coins used in the Ancient world. The numerous pieces of papyrus are generally small fragments, due to their decay over the past two millennia. Several languages are found on these pieces, including Greek, Latin, Arabic, and the Ancient Egyptian writing language of hieroglyphs. The coins found on this floor are made of many different metals, including gold, silver, and bronze. The coins are not only Egyptian, but also Greek, Roman, and Islamic. This has helped historians research the history of Ancient Egyptian trade.
Also on the ground floor are artifacts from the New Kingdom, the time period between 1550 and 1069 BC. These artifacts are generally larger than items created in earlier centuries. Those items include statues, tables, and coffins (sarcophagi).

Unlike many tombs discovered in Egypt, that of King Tutankhamun was found mostly intact. Inside the tomb there was a large collection of artifacts used throughout the King’s life. These artifacts ranged from a decorated chest, which was most likely used as a closet or suitcase, two ivory and gold bracelets, necklaces, and other decorative jewelry, to alabaster vases and flasks. The tomb was also home to many weapons and instruments used by the King. Although the tomb held over 3,500 artifacts, the tomb was not found completely intact. In fact, there had been at least two robberies of the tomb, perhaps soon after Tutankhamun's burial.

The best known artifact in King Tutankhamun’s tomb is the famous Gold Mask, which rested over the bandages that were wrapped around the King’s face. The mask weighs in at 11 kg (24.5 pounds) of solid gold, and is believed to represent what the King’s face really looked like.

The remains of many famous Pharaohs are stored in the Egyptian Museum. One of these is Pharaoh Ramses III, who was an extremely skilled warrior.
For many of the mummified pharaohs, it has been very difficult to determine when they were born, and historians can only estimate a time when they reigned over Egypt. For Amenhotep IV, historians have estimated his reign around 1372 B.C., because they found out when Amenhotep IV's father, Amenhotep III
Amenhotep III
Amenhotep III also known as Amenhotep the Magnificent was the ninth pharaoh of the Eighteenth dynasty. According to different authors, he ruled Egypt from June 1386 to 1349 BC or June 1388 BC to December 1351 BC/1350 BC after his father Thutmose IV died...
died. Also, that Amenhotep IV's tomb inscribed five names he gave himself and one of them, Golden Horus, proves that he was crowned on the bank of the Nile, his father's favorite domain. Before he became pharaoh, he was already married to Nefertiti
Nefertiti
Nefertiti was the Great Royal Wife of the Egyptian Pharaoh Akhenaten. Nefertiti and her husband were known for a religious revolution, in which they started to worship one god only...
. When Amenhotep IV did become pharaoh, he destroyed the religion of Amun. He did this because he wanted to start his own new religion of Aten, the sun, which is pictured as a disc that sends out rays ending in hands.

Historians believe Sneferu
Sneferu
Sneferu, also spelled as Snephru, Snefru or Snofru , was the founder of the Fourth dynasty of Egypt. Estimates of his reign vary, with for instance The Oxford History of Ancient Egypt suggesting a reign from around 2613 BC to 2589 BC, a reign of 24 years, while Rolf Krauss suggests a 30-year reign...
was the first king of the Fourth Dynasty. The year he started his reign was around 2620 B.C. Sneferu appears to have been a fair and just king, and seems to have deserved his chosen name of Master of Justice or Truth. Sneferu, like many other kings, built many temples and structures. All of his structures and buildings had a specific signature: the statue of a young woman symbolizing the foundation. She presents the sign of life and votive offerings, as well as the signs of the city and the stronghold. There are about four or five of these structures in each province.

Many pharaohs chose coronation names and they all seemed to be alike. For example, Sneferu, Tutankhamun and Amenhotep all had the name "Golden Horus".