Encyclopedia
Smithson Tennant FRS (30 November 1761 - 22 February 1815) was an English chemist
Chemist
A chemist is a scientist trained in the study of chemistry. Chemists study the composition of matter and its properties such as density and acidity. Chemists carefully describe the properties they study in terms of quantities, with detail on the level of molecules and their component atoms...
. 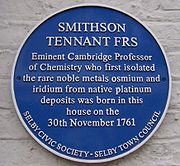 Tennant is best known for his discovery of the elements iridium
Iridium
Iridium is the chemical element with atomic number 77, and is represented by the symbol Ir. A very hard, brittle, silvery-white transition metal of the platinum family, iridium is the second-densest element and is the most corrosion-resistant metal, even at temperatures as high as 2000 °C...
and osmium
Osmium
Osmium is a chemical element with the symbol Os and atomic number 76. Osmium is a hard, brittle, blue-gray or blue-blacktransition metal in the platinum family, and is the densest natural element. Osmium is twice as dense as lead. The density of osmium is , slightly greater than that of iridium,...
, which he found in the residues from the solution of platinum
Platinum
Platinum is a chemical element with the chemical symbol Pt and an atomic number of 78. Its name is derived from the Spanish term platina del Pinto, which is literally translated into "little silver of the Pinto River." It is a dense, malleable, ductile, precious, gray-white transition metal...
ores in 1803. He also contributed to the proof of the identity of diamond
Diamond
In mineralogy, diamond is an allotrope of carbon, where the carbon atoms are arranged in a variation of the face-centered cubic crystal structure called a diamond lattice. Diamond is less stable than graphite, but the conversion rate from diamond to graphite is negligible at ambient conditions...
and charcoal
Charcoal
Charcoal is the dark grey residue consisting of carbon, and any remaining ash, obtained by removing water and other volatile constituents from animal and vegetation substances. Charcoal is usually produced by slow pyrolysis, the heating of wood or other substances in the absence of oxygen...
. The mineral tennantite
Tennantite
Tennantite is a copper arsenic sulfosalt mineral. Its chemical formula is Cu12As4S13. It is grey-black, steel-gray, iron-gray or black in color. A closely related mineral, tetrahedrite has antimony substituting for arsenic and the two form a solid solution series. The two have very similar...
is named after him.

Tennant was born in Selby
Selby
Selby is a town and civil parish in North Yorkshire, England. Situated south of the city of York, along the course of the River Ouse, Selby is the largest and, with a population of 13,012, most populous settlement of the wider Selby local government district.Historically a part of the West Riding...
in Yorkshire
Yorkshire
Yorkshire is a historic county of northern England and the largest in the United Kingdom. Because of its great size in comparison to other English counties, functions have been increasingly undertaken over time by its subdivisions, which have also been subject to periodic reform...
. He attended Beverley Grammar School
Beverley Grammar School
Beverley Grammar School is a boys' secondary school in Beverley, East Riding of Yorkshire. It was founded in about 700 AD/CE and is the oldest state school in England and the sixth oldest school overall in England. The school is a specialist Engineering College and shares a mixed Sixth form with...
and there is a plaque over one of the entrances to the present school commemorating his discovery of the two elements, osmium and iridium. He began to study medicine
Medicine
Medicine is the science and art of healing. It encompasses a variety of health care practices evolved to maintain and restore health by the prevention and treatment of illness....
at Edinburgh
University of Edinburgh
The University of Edinburgh, founded in 1583, is a public research university located in Edinburgh, the capital of Scotland, and a UNESCO World Heritage Site. The university is deeply embedded in the fabric of the city, with many of the buildings in the historic Old Town belonging to the university...
in 1781, but in a few months moved to Cambridge
Cambridge
The city of Cambridge is a university town and the administrative centre of the county of Cambridgeshire, England. It lies in East Anglia about north of London. Cambridge is at the heart of the high-technology centre known as Silicon Fen – a play on Silicon Valley and the fens surrounding the...
, where he devoted himself to botany
Botany
Botany, plant science, or plant biology is a branch of biology that involves the scientific study of plant life. Traditionally, botany also included the study of fungi, algae and viruses...
and chemistry
Chemistry
Chemistry is the science of matter, especially its chemical reactions, but also its composition, structure and properties. Chemistry is concerned with atoms and their interactions with other atoms, and particularly with the properties of chemical bonds....
. He graduated M.D. at Cambridge in 1796, and about the same time purchased an estate near Cheddar
Cheddar
Cheddar is a large village and civil parish in the Sedgemoor district of the English county of Somerset. It is situated on the southern edge of the Mendip Hills, north-west of Wells. The civil parish includes the hamlets of Nyland and Bradley Cross...
, where he carried out agricultural
Agriculture
Agriculture is the cultivation of animals, plants, fungi and other life forms for food, fiber, and other products used to sustain life. Agriculture was the key implement in the rise of sedentary human civilization, whereby farming of domesticated species created food surpluses that nurtured the...
experiments. He was appointed professor of chemistry
BP Professor of Organic Chemistry
The BP Professorship of Organic Chemistry is one of the senior professorships at the University of Cambridge.Founded in 1702 by the university as simply 'Professor of Chemistry', it was retitled as the Professorship of Organic Chemistry in 1943, and in 1991 was renamed after a benefaction from the...
at Cambridge in 1813, but lived to deliver only one course of lectures, being killed near Boulogne-sur-Mer
Boulogne-sur-Mer
-Road:* Metropolitan bus services are operated by the TCRB* Coach services to Calais and Dunkerque* A16 motorway-Rail:* The main railway station is Gare de Boulogne-Ville and located in the south of the city....
by the fall of a bridge over which he was riding.