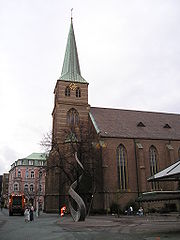 Bottrop (ˈbɔtʁɔp) is a city in west central Germany
Germany
Germany , officially the Federal Republic of Germany , is a federal parliamentary republic in Europe. The country consists of 16 states while the capital and largest city is Berlin. Germany covers an area of 357,021 km2 and has a largely temperate seasonal climate...
, on the Rhine-Herne Canal, in North Rhine-Westphalia
North Rhine-Westphalia
North Rhine-Westphalia is the most populous state of Germany, with four of the country's ten largest cities. The state was formed in 1946 as a merger of the northern Rhineland and Westphalia, both formerly part of Prussia. Its capital is Düsseldorf. The state is currently run by a coalition of the...
. Located in the Ruhr industrial area
Ruhr Area
The Ruhr, by German-speaking geographers and historians more accurately called Ruhr district or Ruhr region , is an urban area in North Rhine-Westphalia, Germany. With 4435 km² and a population of some 5.2 million , it is the largest urban agglomeration in Germany...
, Bottrop adjoins Essen
Essen
- Origin of the name :In German-speaking countries, the name of the city Essen often causes confusion as to its origins, because it is commonly known as the German infinitive of the verb for the act of eating, and/or the German noun for food. Although scholars still dispute the interpretation of...
, Oberhausen
Oberhausen
Oberhausen is a city on the river Emscher in the Ruhr Area, Germany, located between Duisburg and Essen . The city hosts the International Short Film Festival Oberhausen and its Gasometer Oberhausen is an anchor point of the European Route of Industrial Heritage. It is also well known for the...
, Gladbeck
Gladbeck
Gladbeck is a city in the district of Recklinghausen in North Rhine-Westphalia, Germany.The name ´Gladbeck´ evolves from Low German, originally spoken in the area around Gladbeck. ´Glad´ means something like gleamy and ´beck´ means about brook. However, the brook Gladbeck flows under the ground...
and Dorsten
Dorsten
Dorsten is a town in the district of Recklinghausen in North Rhine-Westphalia, Germany and has a population of just below 80,000.Dorsten is situated on the western rim of Westphalia bordering the Rhineland. Its historical old town lies on the south bank of the river Lippe and the Wesel–Datteln...
. The city had been a coal-mining and rail center and contains factories producing coal-tar derivatives, chemicals, textiles, and machinery. Bottrop grew as a mining center beginning in the 1860s, was chartered as a city in 1921, and bombed during the Oil Campaign of World War II
Oil Campaign of World War II
The Allied Oil Campaign of World War II was directed at facilities supplying Nazi Germany with petroleum, oil, and lubrication products...
. In 1975 it unified with the neighbour communities of Gladbeck and Kirchhellen, but Gladbeck left it in 1976, leading to Kirchhellen becoming a district of Bottrop as Bottrop-Kirchhellen.

Bottrop is divided into 3 boroughs, they are: Bottrop-Mitte (Bottrop-Center), Bottrop-Süd (Bottrop South) and Bottrop-Kirchhellen, each one having a borough representation and a borough ruler.

These boroughs are further subdivided into city parts, partly named after their traditional name, while the newly built parts are only recently named :


For statistical reasons, Bottrop is also divided into statistical boroughs, they are (with their official numbering)

From 1919 until 1976 Kirchhellen was its own town. From 1976 until 1978 it was a part of "GlaBotKi"(Gladbeck
Gladbeck
Gladbeck is a city in the district of Recklinghausen in North Rhine-Westphalia, Germany.The name ´Gladbeck´ evolves from Low German, originally spoken in the area around Gladbeck. ´Glad´ means something like gleamy and ´beck´ means about brook. However, the brook Gladbeck flows under the ground...
, Bottrop, Kirchhellen).
In 1978 Kirchhellen became part of Bottrop. The Kirchhellner were very angry and today they are still not happy about it.

Most of Kirchhellner are Catholic (approx. 65%) - there are three churches there.
There is one Lutheran church (approx. 20% of the population is Lutheran and approx. 5% are Muslims). The rest are mostly without a religion.

Since September 12, 2005 so called „Stolpersteine
Stolpersteine
Stolperstein is the German word for "stumbling block", "obstacle", or "something in the way". The artist Gunter Demnig has given this word a new meaning, that of a small, cobblestone-sized memorial for a single victim of Nazism...
“ have been placed by artist Gunter Demnig
Gunter Demnig
Gunter Demnig is a German artist. He is best known for his "Stolperstein" memorials to the victims of Nazi persecution and oppression in Nazi Germany.- Biography :...
around the city in remembrance of the people deported and then killed by the Nazis mostly in Nazi concentration camps or extermination camps.