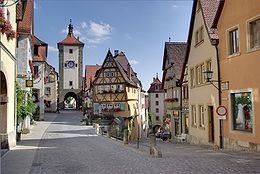 Altstadt is the German language
German language
German is a West Germanic language, related to and classified alongside English and Dutch. With an estimated 90 – 98 million native speakers, German is one of the world's major languages and is the most widely-spoken first language in the European Union....
word for "old town
Old Town
Old Town is the typical designation of a historic or original core of a city or town. Although the city may be larger in its present form, many cities have redesignated this part of the city to commemorate its origins after thorough renovations...
", meaning "historical city centre within the city wall", in contrast to a Neustadt built outside later.

Most German towns have an Altstadt, even though the ravages of war have destroyed many of them, especially during the Thirty Years' War
Thirty Years' War
The Thirty Years' War was fought primarily in what is now Germany, and at various points involved most countries in Europe. It was one of the most destructive conflicts in European history....
(1618-1648). In the "War of the Palatinian Succession" of 1688, the order to Brûlez le Palatinat! was executed by Mélac, devastating many cities and large parts of South Western Germany, like the Heidelberg castle
Heidelberg Castle
The Heidelberg Castle is a famous ruin in Germany and landmark of Heidelberg. The castle ruins are among the most important Renaissance structures north of the Alps....
.

Allied Strategic bombing during World War II
Strategic bombing during World War II
Strategic bombing during World War II is a term which refers to all aerial bombardment of a strategic nature between 1939 and 1945 involving any nations engaged in World War II...
destroyed nearly all large cities, with Dresden
Dresden
Dresden is the capital city of the Free State of Saxony in Germany. It is situated in a valley on the River Elbe, near the Czech border. The Dresden conurbation is part of the Saxon Triangle metropolitan area....
being the most prominent victim. Many smaller towns remained intact, for example Tübingen
Tübingen
Tübingen is a traditional university town in central Baden-Württemberg, Germany. It is situated south of the state capital, Stuttgart, on a ridge between the Neckar and Ammer rivers.-Geography:...
, Dinkelsbühl
Dinkelsbühl
Dinkelsbühl is a historic city in Bavaria, Germany and a former Free imperial city of the Holy Roman Empire. Now it belongs to the district of Ansbach, north of Aalen.-History:...
or Quedlinburg
Quedlinburg
Quedlinburg is a town located north of the Harz mountains, in the district of Harz in the west of Saxony-Anhalt, Germany. In 1994 the medieval court and the old town was set on the UNESCO world heritage list....
. Some Altstadt parts in Freiburg
Freiburg
Freiburg im Breisgau is a city in Baden-Württemberg, Germany. In the extreme south-west of the country, it straddles the Dreisam river, at the foot of the Schlossberg. Historically, the city has acted as the hub of the Breisgau region on the western edge of the Black Forest in the Upper Rhine Plain...
, Berlin
Berlin
Berlin is the capital city of Germany and is one of the 16 states of Germany. With a population of 3.45 million people, Berlin is Germany's largest city. It is the second most populous city proper and the seventh most populous urban area in the European Union...
, Rothenburg ob der Tauber
Rothenburg ob der Tauber
Rothenburg ob der Tauber is a town in the district of Ansbach of Mittelfranken , the Franconia region of Bavaria, Germany, well known for its well-preserved medieval old town, a destination for tourists from around the world. In the Middle Ages, it was an Imperial Free City...
and famously Weimar
Weimar
Weimar is a city in Germany famous for its cultural heritage. It is located in the federal state of Thuringia , north of the Thüringer Wald, east of Erfurt, and southwest of Halle and Leipzig. Its current population is approximately 65,000. The oldest record of the city dates from the year 899...
have been painstakingly restored. Some German Altstädte, with gabled half-timbered houses and cobblestone
Cobblestone
Cobblestones are stones that were frequently used in the pavement of early streets. "Cobblestone" is derived from the very old English word "cob", which had a wide range of meanings, one of which was "rounded lump" with overtones of large size...
markets, have been overhauled after copy-cat places had been built abroad to mimic them, like in 1955 the first Fantasyland
Fantasyland
Fantasyland is one of the "themed lands" at the many Magic Kingdom-style parks run by The Walt Disney Company around the world. Each Fantasyland has a castle as well as several gentle rides themed after Disney movies...
in Disneyland.

Notable Altstadt districts in cities and towns that were destroyed

Stary Sambir - "Old Sambir
Sambir
Sambir is a city in the Lviv Oblast, Ukraine. Serving as the administrative center of the Sambir Raion , the city itself is also designated as a separate raion within the oblast. It is located at around , close to the border with Poland.-History:...
" was also known as Altstadt, equivalent to the Polish
Polish language
Polish is a language of the Lechitic subgroup of West Slavic languages, used throughout Poland and by Polish minorities in other countries...
Staremiasto.