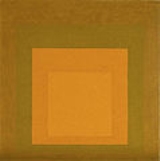 Encyclopedia
Josef Albers was a German
Germany
Germany , officially the Federal Republic of Germany , is a federal parliamentary republic in Europe. The country consists of 16 states while the capital and largest city is Berlin. Germany covers an area of 357,021 km2 and has a largely temperate seasonal climate...
-born American
United States
The United States of America is a federal constitutional republic comprising fifty states and a federal district...
artist and educator whose work, both in Europe and in the United States, formed the basis of some of the most influential and far-reaching art education programs of the 20th century.

Albers was born in Bottrop
Bottrop
Bottrop is a city in west central Germany, on the Rhine-Herne Canal, in North Rhine-Westphalia. Located in the Ruhr industrial area, Bottrop adjoins Essen, Oberhausen, Gladbeck and Dorsten. The city had been a coal-mining and rail center and contains factories producing coal-tar derivatives,...
, Westphalia
Province of Westphalia
The Province of Westphalia was a province of the Kingdom of Prussia and the Free State of Prussia from 1815 to 1946.-History:Napoleon Bonaparte founded the Kingdom of Westphalia, which was a client state of the First French Empire from 1807 to 1813...
, Germany
German Empire
The German Empire refers to Germany during the "Second Reich" period from the unification of Germany and proclamation of Wilhelm I as German Emperor on 18 January 1871, to 1918, when it became a federal republic after defeat in World War I and the abdication of the Emperor, Wilhelm II.The German...
. He studied art in Berlin
Berlin
Berlin is the capital city of Germany and is one of the 16 states of Germany. With a population of 3.45 million people, Berlin is Germany's largest city. It is the second most populous city proper and the seventh most populous urban area in the European Union...
, Essen, and Munich
Munich
Munich The city's motto is "" . Before 2006, it was "Weltstadt mit Herz" . Its native name, , is derived from the Old High German Munichen, meaning "by the monks' place". The city's name derives from the monks of the Benedictine order who founded the city; hence the monk depicted on the city's coat...
, before enrolling as a student in the basic course of Johannes Itten
Johannes Itten
Johannes Itten was a Swiss expressionist painter, designer, teacher, writer and theorist associated with the Bauhaus school...
at the prestigious Weimar
Weimar
Weimar is a city in Germany famous for its cultural heritage. It is located in the federal state of Thuringia , north of the Thüringer Wald, east of Erfurt, and southwest of Halle and Leipzig. Its current population is approximately 65,000. The oldest record of the city dates from the year 899...
Bauhaus
Bauhaus
', commonly known simply as Bauhaus, was a school in Germany that combined crafts and the fine arts, and was famous for the approach to design that it publicized and taught. It operated from 1919 to 1933. At that time the German term stood for "School of Building".The Bauhaus school was founded by...
in 1920. The director and founder of the Bauhaus, Walter Gropius
Walter Gropius
Walter Adolph Georg Gropius was a German architect and founder of the Bauhaus School who, along with Ludwig Mies van der Rohe and Le Corbusier, is widely regarded as one of the pioneering masters of modern architecture....
, asked him in 1923 to teach in the preliminary course ‘Werklehre' of the Department of Design to introduce newcomers to the principles of handicrafts, because Albers came from that background and had appropriate practice and knowledge. In 1925, Albers was promoted to Professor, the year the Bauhaus moved to Dessau
Dessau
Dessau is a town in Germany on the junction of the rivers Mulde and Elbe, in the Bundesland of Saxony-Anhalt. Since 1 July 2007, it is part of the merged town Dessau-Roßlau. Population of Dessau proper: 77,973 .-Geography:...
. At this time, he married Anni Albers
Anni Albers
Annelise Albers was a German-American textile artist and printmaker. She is perhaps the best known textile artist of the 20th century.-Life:...
(née Fleischmann) who was also a student there. His work in Dessau included designing furniture and working with glass. As a younger art teacher, he was teaching at the Bauhaus with artists including Oskar Schlemmer
Oskar Schlemmer
Oskar Schlemmer was a German painter, sculptor, designer and choreographer associated with the Bauhaus school. In 1923 he was hired as Master of Form at the Bauhaus theatre workshop, after working some time at the workshop of sculpture...
, Wassily Kandinsky
Wassily Kandinsky
Wassily Wassilyevich Kandinsky was an influential Russian painter and art theorist. He is credited with painting the first purely-abstract works. Born in Moscow, Kandinsky spent his childhood in Odessa. He enrolled at the University of Moscow, studying law and economics...
and Paul Klee
Paul Klee
Paul Klee was born in Münchenbuchsee, Switzerland, and is considered both a German and a Swiss painter. His highly individual style was influenced by movements in art that included expressionism, cubism, and surrealism. He was, as well, a student of orientalism...
. Klee was the so-called form master who taught the formal aspects in the glass workshops where Albers was the crafts master; they cooperated for several years.

In 1971 (nearly five years before his death), Albers founded the Josef and Anni Albers Foundation, a non-profit organization he hoped would further "the revelation and evocation of vision through art." Today, this organization not only serves as the office Estate of both Josef Albers and his wife Anni Albers
Anni Albers
Annelise Albers was a German-American textile artist and printmaker. She is perhaps the best known textile artist of the 20th century.-Life:...
, but also supports exhibitions and publications focused on Albers works. The official Foundation building is located in Bethany, Connecticut, and "includes a central research and archival storage center to accommodate the Foundation's art collections, library and archives, and offices, as well as residence studios for visiting artists." The U.S. copyright representative for the Josef and Anni Albers Foundation is the Artists Rights Society
Artists Rights Society
Artists Rights Society is a copyright, licensing, and monitoring organization for visual artists in the United States. Founded in 1987, ARS represents the intellectual property rights interests of over 50,000 visual artists and estates of visual artists from around the world .- Member Artists &...
. The executive director of the foundation is Nicholas Fox Weber, an author of fourteen books. The Josef and Anni Albers Foundation is represented by The Pace Gallery
Pace Gallery
The Pace Gallery is a New York City-based exhibition space. It was founded in 1960 in Boston by Arne Glimcher.-PaceWildenstein:From 1993 until April 1, 2010, the gallery became "PaceWildenstein," a joint business venture between the Pace Gallery and Wildenstein & Co....
, New York.

Albers's work represents a transition between traditional European art and the new American art. It incorporated European influences from the constructivists and the Bauhaus movement, and its intensity and smallness of scale were typically European. But his influence fell heavily on American artists of the late 1950s and the 1960s. "Hard-edge
Hard-edge painting
Hard-edge painting is painting in which abrupt transitions are found between color areas. Color areas are often of one unvarying color. The Hard-edge painting style is related to Geometric abstraction, Op Art, Post-painterly Abstraction, and Color Field painting.-History of the term:The term was...
" abstract painters drew on his use of patterns and intense colors, while Op
Op art
Op art, also known as optical art, is a style of visual art that makes use of optical illusions."Optical art is a method of painting concerning the interaction between illusion and picture plane, between understanding and seeing." Op art works are abstract, with many of the better known pieces made...
artists and conceptual art
Conceptual art
Conceptual art is art in which the concept or idea involved in the work take precedence over traditional aesthetic and material concerns. Many of the works, sometimes called installations, of the artist Sol LeWitt may be constructed by anyone simply by following a set of written instructions...
ists further explored his interest in perception.