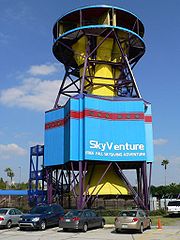 A vertical wind tunnel is a wind tunnel
Wind tunnel
A wind tunnel is a research tool used in aerodynamic research to study the effects of air moving past solid objects.-Theory of operation:Wind tunnels were first proposed as a means of studying vehicles in free flight...
which moves air up in a vertical column. It is a recreational wind tunnel, frequently advertised as "indoor skydiving" or "bodyflight". It is also a popular training tool for skydivers
Parachuting
Parachuting, also known as skydiving, is the action of exiting an aircraft and returning to earth with the aid of a parachute. It may or may not involve a certain amount of free-fall, a time during which the parachute has not been deployed and the body gradually accelerates to terminal...
.

Bodyflight, or 'body flight', is the art of 'flying your body' in a controlled manner. This include turns, rolls, lateral movement, fall rate control, and other acrobatics in the air. The skill of bodyflight makes it possible for skydivers to fly closer to each other while they are falling, to allow them to link together in formation skydiving
Formation skydiving
Formation skydiving is the art of building formations in free-fall with multiple people gripping each others' limbs or specially built "grippers" on their jumpsuits....
, then fly apart to a safe distance before opening parachutes. Many skills of bodyflight can be learned in a vertical wind tunnel, to enable skydivers to become better at controlling their bodies in the sky.

Bodyflight is accomplished via increasing/decreasing the drag of your body, using arms and legs as rudders for bodyflight motion control, as well as other techniques similar to that of an airplane. Professional athletes who fly through the air for long distances, such as ski jumping
Ski jumping
Ski jumping is a sport in which skiers go down a take-off ramp, jump and attempt to land as far as possible down the hill below. In addition to the length of the jump, judges give points for style. The skis used for ski jumping are wide and long...
, have also used certain bodyflight techniques to increase jumping distance by manipulating their bodies to be more airfoil
Airfoil
An airfoil or aerofoil is the shape of a wing or blade or sail as seen in cross-section....
-like. Frequent visitors to a vertical wind tunnel are often called 'tunnel rats', much like frequent visitors to ski slopes are called 'ski bums'.

Some body flying enthusiasts develop their tunnel-flying skills not for sky diving training, but in order to be able to give professional performances. AERODIUM Latvia has a group of professional performers - air acrobats. The team started with a performance at the closing ceremony of the Winter Olympics 2006, and now performs in mobile and stationary vertical wind tunnels all around the world.

All vertical wind tunnels can be classified as follows:

Various propellers and fan types can be used as the mechanism to move air through a vertical wind tunnel. Motors can either be diesel-powered or electric-powered, and typically provide a vertical column of air between 6 and 16 feet wide. A control unit allows for air speed adjustment by a controller in constant view of the flyers. The controller can turn the air up for extra lift or down for less lift depending on the size, skill level, and needs of the tunnel flyer.

Indoor skydiving also appeals to the mass market
Mass market
The mass market is a general business term describing the largest group of consumers for a specified industry product. It is the opposite extreme of the term niche market.-General:...
audience that are afraid of heights
Acrophobia
Acrophobia is an extreme or irrational fear of heights. It belongs to a category of specific phobias, called space and motion discomfort that share both similar etiology and options for treatment.Most people experience a degree of natural fear when exposed to heights, especially if there is little...
, since in a vertical wind tunnel, one only floats a few feet above trampoline-type netting. Wind speed can be adjusted at many vertical wind tunnels, usually between 80 and 150 mph, to accommodate the abilities of an individual and to compensate for variable body drag during advanced acrobatics. Indoor vertical wind tunnels contain the person within a chamber through the use of walls. Outdoor vertical wind tunnels have either netting or inflatable cushions surrounding the airstream, to catch anyone falling out of the airstream. While wind tunnel flying is considered a low impact activity, it does exert some strain on the flier's back, neck, and shoulders. Therefore, people with shoulder dislocations or back/neck problems should check with a doctor first. While actual skydiving out of an aircraft is subject to age limitations which vary from country to country, and even from state to state in the US, bodyflying has no set lower or upper limits. Children can fly provided that they are happy and are not being pressed to participate, and they have parental/guardian signed consent.

The first recreational vertical wind tunnel was developed by a Canadian company named AERODIUM in Quebec. It was developed and patented as the "Levitationarium" by Jean St. Germain in 1979. In 1982 St. Germain sold his concept and helped build two wind tunnels in America. The first vertical wind tunnel, built solely for a commercial use, opened in the summer of 1982 in Las Vegas, Nevada. Later that same year, a second wind tunnel opened in Pigeon Forge, TN. Both facilities opened and operated under the name of Flyaway Indoor Skydiving until 2005 when 15-year Flyaway Manager Keith Fields purchased the Las Vegas facility and later renamed it "Vegas Indoor Skydiving".

An important milestone in vertical wind tunnel history was 'Wind Machine' at the closing ceremonies
2006 Winter Olympics Closing Ceremony
The Closing Ceremony of the 2006 Winter Olympics took place on February 26, 2006 beginning at 20:00 CET at the Stadio Olimpico in Turin, Italy.-Program:...
of the 2006 Torino Winter Olympics http://www.aerodium.ca/en/gallery/shows/shows/. This was a custom-built unit by AERODIUM (Latvia/Canada) for the closing ceremony. Many people had never seen a vertical wind tunnel before, and were fascinated by the flying humans with no wires.

A vertical wind tunnel performance in Moscow
Moscow
Moscow is the capital, the most populous city, and the most populous federal subject of Russia. The city is a major political, economic, cultural, scientific, religious, financial, educational, and transportation centre of Russia and the continent...
's Red Square
Red Square
Red Square is a city square in Moscow, Russia. The square separates the Kremlin, the former royal citadel and currently the official residence of the President of Russia, from a historic merchant quarter known as Kitai-gorod...
was shown in 2009 during the presentation of logotype of Sochi 2014 Winter Olympics
2014 Winter Olympics
The 2014 Winter Olympics, officially the XXII Olympic Winter Games, or the 22nd Winter Olympics, is a major international multi-sport event scheduled to be celebrated from 7 to 23 February 2014, in Sochi, Russia with some events held in the resort town of Krasnaya Polyana. Both the Olympic and...
. In 2010, a vertical wind tunnel was shown at the Expo 2010 in Shanghai, China.