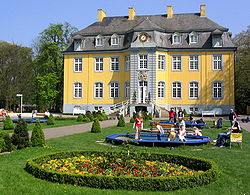 Schloss Beck is a Baroque
Baroque
The Baroque is a period and the style that used exaggerated motion and clear, easily interpreted detail to produce drama, tension, exuberance, and grandeur in sculpture, painting, literature, dance, and music...
castle in Bottrop
Bottrop
Bottrop is a city in west central Germany, on the Rhine-Herne Canal, in North Rhine-Westphalia. Located in the Ruhr industrial area, Bottrop adjoins Essen, Oberhausen, Gladbeck and Dorsten. The city had been a coal-mining and rail center and contains factories producing coal-tar derivatives,...
, Germany
Germany
Germany , officially the Federal Republic of Germany , is a federal parliamentary republic in Europe. The country consists of 16 states while the capital and largest city is Berlin. Germany covers an area of 357,021 km2 and has a largely temperate seasonal climate...
, planned and built as a “maison de plaisance” between 1766 and 1777 by Johann Conrad Schlaun. It is currently run as an amusement park
Amusement park
thumb|Cinderella Castle in [[Magic Kingdom]], [[Disney World]]Amusement and theme parks are terms for a group of entertainment attractions and rides and other events in a location for the enjoyment of large numbers of people...
.

Although the building was designed as a palatial residence, by the end of the 18th century Beck Castle had become a distillery for schnaps. It came into the possession of the Metternich family around 1850.

Despite the Second World War the castle remained intact, and in 1958 the Hibernia Mining Society bought the property. However, Hibernia was only interested in the grounds, and offered the castle building to all interested parties for free. Because of the responsibility and the expense of maintaining it, nobody wanted to acquire it until 1966, when a certain Karl Kuchenbäcker bought it. Because of years of neglect, the castle had to be completely restored, and to provide money for the restoration Kuchenbäcker opened it to the public.

Following Kuchenbäcker's death (on 28 December 2004), his family put the castle and amusement park up for sale. It is now a protected historical monument.

Beck Castle is very popular with people in the surrounding area, especially for children from 3 to 14 years, because this small theme park is not well known and is rarely overcrowded. For the locals, it is a place to go with the family to enjoy the peace and quiet and to let the children play safely. The park management offers Christmas parties and weddings in large public rooms, as well as nightly dances and recitations.