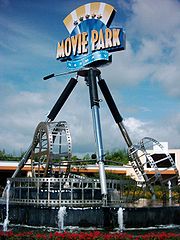 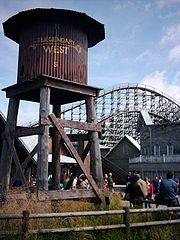 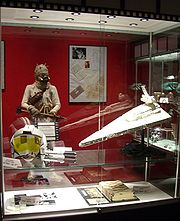 The Movie Park Germany is a theme park with real movie studios in Bottrop
Bottrop
Bottrop is a city in west central Germany, on the Rhine-Herne Canal, in North Rhine-Westphalia. Located in the Ruhr industrial area, Bottrop adjoins Essen, Oberhausen, Gladbeck and Dorsten. The city had been a coal-mining and rail center and contains factories producing coal-tar derivatives,...
-Kirchhellen. It consists of 6 areas based on the topic "fascination film".

The park was opened in June 1996 as "Warner Bros. Movie World Germany" on the former territory of the amusement park
Amusement park
thumb|Cinderella Castle in [[Magic Kingdom]], [[Disney World]]Amusement and theme parks are terms for a group of entertainment attractions and rides and other events in a location for the enjoyment of large numbers of people...
"Traumlandpark", which had already replaced an earlier attraction called "Märchenwald". During the time from 1992 to 1993, a short lived theme park called "Bavaria Filmpark" existed in this location as well. The laying of the cornerstone was in May 1994.

At the end of 1999, Warner Bros. Movie World started a cooperation with Six Flags
Six Flags
Six Flags Entertainment Corp. is the world's largest amusement park corporation based on quantity of properties and the fifth most popular in terms of attendance. The company maintains 14 properties located throughout North America, including theme parks, thrill parks, water parks and family...
Inc. As part of this cooperation, Warner Bros. gave the license rights to Six Flags, who in turn managed the park under the name Warner Bros. Movie World as a licencee.

In 2004, the park was under the leadership of StarParks, a sub-group of Palamon Capital, leading to the name of the park being changed into "Movie Park Germany" in 2005, with the Warner brothers theming excluded out of the park, and replaced by newer themes from 20th Century Fox, MGM, and Nick. In 2010 Parque Reunidos bought the park from Palamon Capital, and it still operates under the name Movie Park Germany, and has the same old theme lands, rides and etc.

Movie Park Germany features many live shows as well as a 4-D movie
4-D film
4-D film is a marketing term that describes an entertainment presentation system combining a 3-D film with physical effects in the theatre, which occur in synchronization with the film...
.
The source of this article is wikipedia, the free encyclopedia.  The text of this article is licensed under the GFDL.