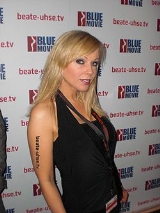 She has performed in story-driven German adult films, such as German Beauty (an adult adaptation of American Beauty), Eiskalte Engel (the German title of Cruel intentions), the 00Sex series (based on James Bond
James Bond
James Bond, code name 007, is a fictional character created in 1953 by writer Ian Fleming, who featured him in twelve novels and two short story collections. There have been a six other authors who wrote authorised Bond novels or novelizations after Fleming's death in 1964: Kingsley Amis,...
) and Ariella the Mermaid. She has also acted in a small number of American adult films, including films for Wicked Pictures
Wicked Pictures
Wicked Pictures is an American pornographic movie studio headquartered in Canoga Park, California. In 2006 it was described by Reuters as one of the handful of studios that dominate the U.S. porn industry...
.

One unusual career move was her involvement in RTL Promiboxen, German TV's version of celebrity boxing. For the 2003 program, she trained as a potential substitute in case the announced boxers, Tanja Szewczenko
Tanja Szewczenko
Tanja Szewczenko is a German figure skater and actress. She is the 1994 World bronze medalist and 1998 European bronze medalist.-Biography:...
and Samantha Fox
Samantha Fox
Samantha Karen "Sam" Fox is an English dance-pop singer, actress, and former glamour model. In 1983, at the age of 16, she began her topless modeling career on Page Three of The Sun, and went on to become a popular pin-up girl...
, were unable to participate in their bout.

For the 2004 program, Trump was announced as one of the celebrity boxers, with her opponent being Juliane Ziegler, the 22-year-old star of German TV reality program der Bachelor. Trump underwent four weeks of intensive training with noted martial arts trainer Klaus Waschkewitz. Trump's ring name was "Bad Babe" while Ziegler's was "Red Rose".

On May 1, 2004, Trump stepped into the boxing ring before 1800 spectators at Cologne
KOLN
KOLN, digital channel 10, is the CBS affiliate in Lincoln, Nebraska. It operates a satellite station, KGIN, on digital channel 11 in Grand Island. KGIN repeats all KOLN programming, but airs separate commercials...
’s Colleseum, but was soundly beaten by Ziegler who easily out-reached and out-pointed Trump to win the three-round bout by a unanimous decision.

Since January 6, 2005, she is the host of the German television show, Love Check.