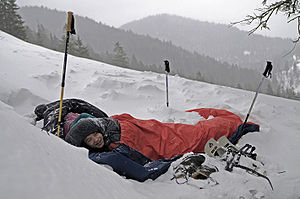 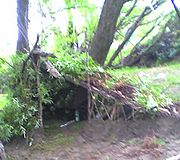 A bivouac traditionally refers to a military encampment made with tent
Tent
A tent is a shelter consisting of sheets of fabric or other material draped over or attached to a frame of poles or attached to a supporting rope. While smaller tents may be free-standing or attached to the ground, large tents are usually anchored using guy ropes tied to stakes or tent pegs...
s or improvised shelters, usually without shelter or protection from enemy fire or such a site where a camp may be built. It is also commonly used to describe a variety of improvised camp sites such as those used in scouting
Scouting
Scouting, also known as the Scout Movement, is a worldwide youth movement with the stated aim of supporting young people in their physical, mental and spiritual development, that they may play constructive roles in society....
and mountain climbing
Mountaineering
Mountaineering or mountain climbing is the sport, hobby or profession of hiking, skiing, and climbing mountains. While mountaineering began as attempts to reach the highest point of unclimbed mountains it has branched into specialisations that address different aspects of the mountain and consists...
. It may often refer to sleeping in the open with a bivouac sack
Bivouac sack
A bivouac sack is an extremely small, lightweight, waterproof shelter, and an alternative to traditional tent systems. It is used by climbers, mountaineers, hikers, ultralight backpackers, soldiers and minimalist campers...
, but it may also refer to a shelter constructed of natural materials like a structure of branches to form frame may be utilized, which is then covered with leaves
Leaf
A leaf is an organ of a vascular plant, as defined in botanical terms, and in particular in plant morphology. Foliage is a mass noun that refers to leaves as a feature of plants....
, fern
Fern
A fern is any one of a group of about 12,000 species of plants belonging to the botanical group known as Pteridophyta. Unlike mosses, they have xylem and phloem . They have stems, leaves, and roots like other vascular plants...
s and similar for waterproofing
Waterproofing
Waterproof or water-resistant describes objects relatively unaffected by water or resisting the ingress of water under specified conditions. Such items may be used in wet environments or under water to specified depths...
and duff (also known as leaflitter) for insulation
Thermal insulation
Thermal insulation is the reduction of the effects of the various processes of heat transfer between objects in thermal contact or in range of radiative influence. Heat transfer is the transfer of thermal energy between objects of differing temperature...
.

As a verb
Verb
A verb, from the Latin verbum meaning word, is a word that in syntax conveys an action , or a state of being . In the usual description of English, the basic form, with or without the particle to, is the infinitive...
, to bivouac (alternatively bivouacked, bivouacking, bivouacs also bivouacks) is to set up or camp in any such improvised camp.

The term bivouac was introduced into English
English language
English is a West Germanic language that arose in the Anglo-Saxon kingdoms of England and spread into what was to become south-east Scotland under the influence of the Anglian medieval kingdom of Northumbria...
from French
French language
French is a Romance language spoken as a first language in France, the Romandy region in Switzerland, Wallonia and Brussels in Belgium, Monaco, the regions of Quebec and Acadia in Canada, and by various communities elsewhere. Second-language speakers of French are distributed throughout many parts...
but did not become common until after the Napoleonic Wars
Napoleonic Wars
The Napoleonic Wars were a series of wars declared against Napoleon's French Empire by opposing coalitions that ran from 1803 to 1815. As a continuation of the wars sparked by the French Revolution of 1789, they revolutionised European armies and played out on an unprecedented scale, mainly due to...
; it ultimately stems from the Alsatian
Alsace
Alsace is the fifth-smallest of the 27 regions of France in land area , and the smallest in metropolitan France. It is also the seventh-most densely populated region in France and third most densely populated region in metropolitan France, with ca. 220 inhabitants per km²...
or Swiss German
Swiss German
Swiss German is any of the Alemannic dialects spoken in Switzerland and in some Alpine communities in Northern Italy. Occasionally, the Alemannic dialects spoken in other countries are grouped together with Swiss German as well, especially the dialects of Liechtenstein and Austrian Vorarlberg...
word biwacht. (Broken down, it reads bie- (the modern German equivalent is bei-) for subordinate, secondary and wacht for guarding as in secondary night watch.) Originally, the term referred to a guard duty watch set up outside a fortified town to warn of approaching enemy armies, in addition to the main watch inside the town that functioned more or less like a police station does today; these secondary watches used temporary shelter, and the term eventually came to refer to that aspect only.

Single sided designs allow easy access and allow the heat of a fire into the shelter, while full roofed designs have much better heat retention. As a general rule the roof should be at least a foot thick and opaque to bright sunlight. Artificial bivouacs can be constructed using a variety of available materials from corrugated iron sheeting or plywood
Plywood
Plywood is a type of manufactured timber made from thin sheets of wood veneer. It is one of the most widely used wood products. It is flexible, inexpensive, workable, re-usable, and can usually be locally manufactured...
, to groundsheets
Tent
A tent is a shelter consisting of sheets of fabric or other material draped over or attached to a frame of poles or attached to a supporting rope. While smaller tents may be free-standing or attached to the ground, large tents are usually anchored using guy ropes tied to stakes or tent pegs...
or purpose-made hootchies (bashas). Although these have the advantage of being speedy to erect and resource efficient they have relatively poor insulation properties and are relatively easily damaged by the myriad sharp objects usually found in camp.

A hootchie (or basha
Basha (tarpaulin)
A Basha is a waterproof canvas or plastic sheet with eyelets or loops on the perimeter, which is used in camping, outdoor, or military situations to act as a shelter, in the form of an impromptu tent and/or groundsheet, usually supported with rope or even bungee cords attached to trees.-Military...
) is a simple tent
Tent
A tent is a shelter consisting of sheets of fabric or other material draped over or attached to a frame of poles or attached to a supporting rope. While smaller tents may be free-standing or attached to the ground, large tents are usually anchored using guy ropes tied to stakes or tent pegs...
, made from one or two sheets of waterproof fabric
Textile
A textile or cloth is a flexible woven material consisting of a network of natural or artificial fibres often referred to as thread or yarn. Yarn is produced by spinning raw fibres of wool, flax, cotton, or other material to produce long strands...
and some strong cord
Rope
A rope is a length of fibres, twisted or braided together to improve strength for pulling and connecting. It has tensile strength but is too flexible to provide compressive strength...
. Generally a basha is made of RipStop nylon with a reinforced seam, eyelets and loops or tabs are located along all four sides of the sheet and across the two central lines of symmetry. Usually measuring 6 foot by 8 foot (although much larger sizes can be found) the basha is an extremely versatile shelter that can be erected in many different ways to suit the particular conditions of the location. (The word also sometimes refers to a special type of bivouac sack
Bivouac sack
A bivouac sack is an extremely small, lightweight, waterproof shelter, and an alternative to traditional tent systems. It is used by climbers, mountaineers, hikers, ultralight backpackers, soldiers and minimalist campers...
.)

There are many different ways to put up a bivouac shelter. The most common method is to use one bivouac sheet as the roof
Roof
A roof is the covering on the uppermost part of a building. A roof protects the building and its contents from the effects of weather. Structures that require roofs range from a letter box to a cathedral or stadium, dwellings being the most numerous....
of the shelter and a second as the groundsheet. The 'roof' flysheet
Fly (tent)
A fly refers to the outer layer of a tent or to a piece of material which is strung up using rope as a minimalist, stand-alone shelter. In basic terms, a fly is a tent without walls. Purpose-made stand-alone flies are also sometimes referred to as bivouacs, bivvies, tarpaulins, or hootchies...
is suspended along in its ridge line by a cord tied between two tree
Tree
A tree is a perennial woody plant. It is most often defined as a woody plant that has many secondary branches supported clear of the ground on a single main stem or trunk with clear apical dominance. A minimum height specification at maturity is cited by some authors, varying from 3 m to...
s which are a suitable distance apart. The four corners of the flysheet are then either pegged out or tied down to other trees. Care must be taken to leave a gap between the ground and the sheet to ensure that you can see out and that there is enough air flow to stop condensation.

Storm poles are often used - these are poles made of metal and are used to hold up bivouacs. They are normally extensible and raise the heights of the bivouac. They are often used by fishermen. Hikers often use their extensible trekking poles for the same purpose.

When making camp
Campsite
A campsite or camping pitch is a place used for overnight stay in the outdoors. In British English a campsite is an area, usually divided into a number of pitches, where people can camp overnight using tents or camper vans or caravans; this British English use of the word is synonymous with the...
in a tropical situation, where sleeping off the ground is desirable, it is a common practice to string up a hammock
Hammock
A hammock is a sling made of fabric, rope, or netting, suspended between two points, used for swinging, sleeping, or resting. It normally consists of one or more cloth panels, or a woven network of twine or thin rope stretched with ropes between two firm anchor points such as trees or posts....
underneath the bivouac rather than use a groundsheet.

The colloquial Saxon word boofen was derived from pofen (= sleep soundly and for a long time). The meaning of Boofen is, on the one hand, a suitable place to sleep soundly for the night or after a successful climb, and on the other , to experience and enjoy nature.
The source of this article is wikipedia, the free encyclopedia.  The text of this article is licensed under the GFDL.