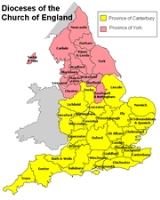 Encyclopedia
The Province of Canterbury, also called the Southern Province, is one of two ecclesiastical province
Ecclesiastical Province
An ecclesiastical province is a large jurisdiction of religious government, so named by analogy with a secular province, existing in certain hierarchical Christian churches, especially in the Catholic Church and Orthodox Churches and in the Anglican Communion...
s making up the Church of England
Church of England
The Church of England is the officially established Christian church in England and the Mother Church of the worldwide Anglican Communion. The church considers itself within the tradition of Western Christianity and dates its formal establishment principally to the mission to England by St...
. (The other is the Province of York
Province of York
The Province of York is one of two ecclesiastical provinces making up the Church of England, and consists of 14 dioceses which cover the northern third of England and the Isle of Man. York was elevated to an Archbishopric in 735 AD: Ecgbert of York was the first archbishop...
.) It consists of 30 diocese
Diocese
A diocese is the district or see under the supervision of a bishop. It is divided into parishes.An archdiocese is more significant than a diocese. An archdiocese is presided over by an archbishop whose see may have or had importance due to size or historical significance...
s, covering roughly the southern two-thirds of England
England
England is a country that is part of the United Kingdom. It shares land borders with Scotland to the north and Wales to the west; the Irish Sea is to the north west, the Celtic Sea to the south west, with the North Sea to the east and the English Channel to the south separating it from continental...
, along with the Channel Islands
Channel Islands
The Channel Islands are an archipelago of British Crown Dependencies in the English Channel, off the French coast of Normandy. They include two separate bailiwicks: the Bailiwick of Guernsey and the Bailiwick of Jersey...
, the Falkland Islands
Falkland Islands
The Falkland Islands are an archipelago in the South Atlantic Ocean, located about from the coast of mainland South America. The archipelago consists of East Falkland, West Falkland and 776 lesser islands. The capital, Stanley, is on East Falkland...
, a few parishes in Wales
Wales
Wales is a country that is part of the United Kingdom and the island of Great Britain, bordered by England to its east and the Atlantic Ocean and Irish Sea to its west. It has a population of three million, and a total area of 20,779 km²...
, and the mainland of Europe
Europe
Europe is, by convention, one of the world's seven continents. Comprising the westernmost peninsula of Eurasia, Europe is generally 'divided' from Asia to its east by the watershed divides of the Ural and Caucasus Mountains, the Ural River, the Caspian and Black Seas, and the waterways connecting...
.