The M-21 Field Rocket System with a BM-21 launch vehicle (122 mm multiple rocket launcher (MRL) system entered service with the Soviet Army in 1963 to replace the aging 140 mm BM-14
BM-14
The BM-14 , is a Soviet-made 140mm multiple rocket launcher, fielded by the Soviet Union.The BM-14 can fire rockets fitted with chemical , smoke or high-explosive fragmentation warheads...
system. The launch vehicle consists of a Ural-375D
Ural-375D
The Ural-375D is a general purpose 4.5 ton 6x6 truck, produced at the Ural Automotive Plant in the Russian SFSR since 1961. The ZIL-157 was the standard Soviet truck until it was replaced by the Ural-375D, which became the standard Soviet truck in 1979. The Ural-375D was soon replaced by the...
six-by-six truck chassis fitted with a bank of 40 launch tubes arranged in a rectangular shape that can be turned away from the unprotected cab. The vehicle is powered by a water-cooled V-8 180 hp gasoline engine, has a maximum road speed of 75 km/h (46.6 mph), road range of up to 750 kilometres (466 mi), and can cross fords up to 1.5 metre deep. The original vehicle together with supporting equipment (including the re-supply truck 9T254 with 60 rockets) is referred to by the GRAU index 9K51; the launcher itself has the industrial index of 2B5. In 1976, the BM-21 was mounted on the newer Ural-4320
Ural-4320
The Ural-4320 is a general purpose off-road 6x6 truck, produced at the Ural Automotive Plant in Miass, Russia for use in the Russian army. Introduced in 1976, it is still in production today....
six-by-six army truck.
The crew of five men can emplace the system and have it ready to fire in three minutes. The crew can fire the rockets from the cab or from a trigger at the end of a 64 metres (210 ft) cable. All 40 rockets can be away in as little as 20 seconds, but can also be fired individually or in small groups in several-second intervals. A PG-1M panoramic telescope with K-1 collimator can be used for sighting. The BM-21 can be packed up and ready to move in two minutes, which can be necessary when engaged by counter-battery fire
Counter-battery fire
Counter-battery fire is a type of mission assigned to military artillery forces, which are given the task of locating and firing upon enemy artillery.-Background:...
. Reloading is done manually and takes about 10 minutes.

Each 2.87 metre rocket is slowly spun by rifling in its tube as it exits, which along with its primary fin stabilization keeps it on course. Rockets armed with high explosive/fragmentation, incendiary, or chemical warheads can be fired 20 kilometres (12.4 mi). Newer high explosive and cargo (used to deliver anti-personnel or antitank mines) rockets have a range of 30 kilometres (18.6 mi) and more. Warheads weigh around 20 kilograms (44.1 lb), depending on the type.

The relative accuracy of this system and the number of rockets each vehicle is able to quickly bring to bear on an enemy target make it effective, especially at shorter ranges. One battalion of eighteen launchers is able to deliver 720 rockets in a single volley. However, the system cannot be used in situations that call for pinpoint precision.

Adaptations of the launcher were/are produced by several countries including China
People's Republic of China
China , officially the People's Republic of China , is the most populous country in the world, with over 1.3 billion citizens. Located in East Asia, the country covers approximately 9.6 million square kilometres...
, Czechoslovakia
Czechoslovakia
Czechoslovakia or Czecho-Slovakia was a sovereign state in Central Europe which existed from October 1918, when it declared its independence from the Austro-Hungarian Empire, until 1992...
, Egypt
Egypt
Egypt , officially the Arab Republic of Egypt, Arabic: , is a country mainly in North Africa, with the Sinai Peninsula forming a land bridge in Southwest Asia. Egypt is thus a transcontinental country, and a major power in Africa, the Mediterranean Basin, the Middle East and the Muslim world...
, Iran
Iran
Iran , officially the Islamic Republic of Iran , is a country in Southern and Western Asia. The name "Iran" has been in use natively since the Sassanian era and came into use internationally in 1935, before which the country was known to the Western world as Persia...
, North Korea
North Korea
The Democratic People’s Republic of Korea , , is a country in East Asia, occupying the northern half of the Korean Peninsula. Its capital and largest city is Pyongyang. The Korean Demilitarized Zone serves as the buffer zone between North Korea and South Korea...
, Poland
Poland
Poland , officially the Republic of Poland , is a country in Central Europe bordered by Germany to the west; the Czech Republic and Slovakia to the south; Ukraine, Belarus and Lithuania to the east; and the Baltic Sea and Kaliningrad Oblast, a Russian exclave, to the north...
and Romania
Romania
Romania is a country located at the crossroads of Central and Southeastern Europe, on the Lower Danube, within and outside the Carpathian arch, bordering on the Black Sea...
. 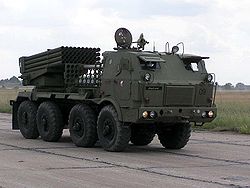 The Egyptians domestically manufacture the rockets "Sakr-36" and "Sakr-18" with a respective range of 36 and 18 km (11.2 mi), and the latest "Sakr-45" with a superior range of 45 km (28 mi). Rather than a standard HE-Frag round, the Egyptian military prefers a 23 kilograms (50.7 lb) cluster munition, which can be extremely effective against lightly armored equipment and troop concentrations. Both rockets, as well as the original Soviet models of course, are fired by locally manufactured rocket launchers like the RL-21 (copy of BM-11) and RC-21 (copy of BM-21, similar to the Hadid HM20). The Helwan Machine Tools Company also produces portable systems with one, three, four and eight launch tubes.

Since 2006, Hamas
Hamas
Hamas is the Palestinian Sunni Islamic or Islamist political party that governs the Gaza Strip. Hamas also has a military wing, the Izz ad-Din al-Qassam Brigades...
has made use of 122mm Grad rockets and 122mm Grad-style copies made in Iran, and others have been Eastern-bloc editions modified to expand their range and
lethality. The rockets were believed to be smuggled into the Gaza Strip via tunnels from Egypt. Some of the rockets were of a Chinese Grad variant. Hamas sources said they were pleased by the performance of the Chinese variants of the BM-21 Grad rocket, which demonstrated a far greater range and blast impact than Palestinian made rockets, as well as Russian-origin Grads or Katyushas.

In the 2010 attacks on Eilat and Aqaba, nine standard 122mm Grad rockets were used. For the most part, rockets are smuggled into the Gaza Strip through the network of tunnels between the Strip and Egypt.

During the first week of April 2011, Israeli defense forces intercepted and destroyed several Grad rockets fired from Gaza near Ashkelon in southern Israel, using a newly deployed anti-missile system called Iron Dome
Iron Dome
Iron Dome is a mobile air defense system in development by Rafael Advanced Defense Systems designed to intercept short-range rockets and artillery shells. The system was created as a defensive countermeasure to the rocket threat against Israel's civilian population on its northern and southern...
.

On Saturday August 20, 2011, over 24 Grad rockets were fired from the Gaza Strip towards Israel, landing in Beersheba and Ashdod and killing 1 Israeli. Hamas has claimed responsibility for these attacks.

On Saturday October 29, 2011, the Islamic Jihad
Islamic Jihad Movement in Palestine
The Islamic Jihad Movement in Palestine known in the West as simply Palestinian Islamic Jihad , is a small Palestinian militant organization. The group has been labelled as a terrorist group by the United States, the European Union, the United Kingdom, Japan, Canada, Australia and Israel...
fired eight Grad rockets towards Ashdod, Gan Yavne
Gan Yavne
Gan Yavne is a in the Center District of Israel, located adjacent to the city of Ashdod. It was founded in 1931 and declared a local council in 1950.Gan Yavne lies east of the Tel-Aviv–Ashkelon highway...
, and west of Be'er Sheva wounding one person and causing light wounds to two more, just hours after Israel Defense Forces
Israel Defense Forces
The Israel Defense Forces , commonly known in Israel by the Hebrew acronym Tzahal , are the military forces of the State of Israel. They consist of the ground forces, air force and navy. It is the sole military wing of the Israeli security forces, and has no civilian jurisdiction within Israel...
soldiers killed Ahmed al-Sheikh Khalil, a commander of the Islamic Jihad and four of its munitions experts. They allegedly were responsible for firing one additional Grad rocket towards Ashdod the previous Wednesday., in response to attacks from the Israeli Air Force
Israeli Air Force
The Israeli Air Force is the air force of the State of Israel and the aerial arm of the Israel Defense Forces. It was founded on May 28, 1948, shortly after the Israeli Declaration of Independence...
towards a militant squad that was preparing to launch rockets, earlier in the month.