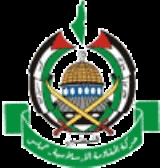 Based on the principles of Islamic fundamentalism
Islamic fundamentalism
Islamic fundamentalism is a term used to describe religious ideologies seen as advocating a return to the "fundamentals" of Islam: the Quran and the Sunnah. Definitions of the term vary. According to Christine L...
gaining momentum throughout the Arab world in the 1980s, Hamas was founded in 1987 (during the First Intifada
First Intifada
The First Intifada was a Palestinian uprising against the Israeli occupation of the Palestinian Territories. The uprising began in the Jabalia refugee camp and quickly spread throughout Gaza, the West Bank and East Jerusalem....
) as an offshoot of the Egyptian Muslim Brotherhood
Muslim Brotherhood
The Society of the Muslim Brothers is the world's oldest and one of the largest Islamist parties, and is the largest political opposition organization in many Arab states. It was founded in 1928 in Egypt by the Islamic scholar and schoolteacher Hassan al-Banna and by the late 1940s had an...
.

"The Islamic Resistance Movement is one of the links in the chain of the struggle against the Zionist invaders."

"The Movement's programme is Islam. From it, it draws its ideas, ways of thinking and understanding of the universe, life and man. It resorts to it for judgement in all its conduct, and it is inspired by it for guidance of its steps."

"By adopting Islam as its way of life, the Movement goes back to the time of the birth of the Islamic message, of the righteous ancestor, for Allah is its target, the Prophet is its example and the Koran is its constitution."

"The Moslem woman has a role no less important than that of the moslem man in the battle of liberation."