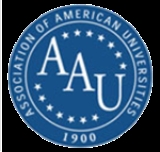 Encyclopedia
The Association of American Universities (AAU) is an organization
Organization
An organization is a social group which distributes tasks for a collective goal. The word itself is derived from the Greek word organon, itself derived from the better-known word ergon - as we know `organ` - and it means a compartment for a particular job.There are a variety of legal types of...
of leading research universities
University
A university is an institution of higher education and research, which grants academic degrees in a variety of subjects. A university is an organisation that provides both undergraduate education and postgraduate education...
devoted to maintaining a strong system of academic research
Research
Research can be defined as the scientific search for knowledge, or as any systematic investigation, to establish novel facts, solve new or existing problems, prove new ideas, or develop new theories, usually using a scientific method...
and education. It consists of 59 universities in the United States
United States
The United States of America is a federal constitutional republic comprising fifty states and a federal district...
(both public and private
Private university
Private universities are universities not operated by governments, although many receive public subsidies, especially in the form of tax breaks and public student loans and grants. Depending on their location, private universities may be subject to government regulation. Private universities are...
) and two universities in Canada
Canada
Canada is a North American country consisting of ten provinces and three territories. Located in the northern part of the continent, it extends from the Atlantic Ocean in the east to the Pacific Ocean in the west, and northward into the Arctic Ocean...
.

The AAU was founded in 1900 by a group of fourteen Ph.D.
Doctor of Philosophy
Doctor of Philosophy, abbreviated as Ph.D., PhD, D.Phil., or DPhil , in English-speaking countries, is a postgraduate academic degree awarded by universities...
-granting universities in the United States to strengthen and standardize American doctoral programs. Today, the primary purpose of the organization is to provide a forum for the development and implementation of institutional and national policies, in order to promote strong programs in academic research and scholarship and undergraduate, graduate, and professional education.

The largest attraction of the AAU for many schools, especially nonmembers, is prestige; for example, in 2010 a spokesman for nonmember University of Connecticut
University of Connecticut
The admission rate to the University of Connecticut is about 50% and has been steadily decreasing, with about 28,000 prospective students applying for admission to the freshman class in recent years. Approximately 40,000 prospective students tour the main campus in Storrs annually...
called it "perhaps the most elite organization in higher education. You'd probably be hard-pressed to find a major research university that didn't want to be a member of the AAU." Because of the lengthy and difficult entrance process, boards of trustees, state legislators, and donor
Donor
A donor in general is a person who donates something voluntarily. Usually used to represent a form of pure altruism but sometimes used when the payment for a service is recognised by all parties as representing less than the value of the donation and that the motivation is altruistic...
s often see membership as evidence of the quality of a university.

The AAU acts as a lobbyist
Lobbying
Lobbying is the act of attempting to influence decisions made by officials in the government, most often legislators or members of regulatory agencies. Lobbying is done by various people or groups, from private-sector individuals or corporations, fellow legislators or government officials, or...
in its headquarters city of Washington, D.C. for research funding for its members. The association holds two annual meetings. The fall meeting is conducted on a member campus while the spring meeting is held in Washington. Separate meetings are held for university presidents, provost
Provost (education)
A provost is the senior academic administrator at many institutions of higher education in the United States, Canada and Australia, the equivalent of a pro-vice-chancellor at some institutions in the United Kingdom and Ireland....
s, and other officials. Because the meetings are private they offer the opportunity for discussion without media coverage, and prominent government officials, businessmen, and others often speak to the groups.

Founding members are bolded, and year of admission is shown in parentheses.

Departed as a result of "institutional emphases and energies" that differed from the other AAU members.
Departed because its "goals diverged from the strong research orientation of other AAU institutions".
Removed from the AAU. Chancellor Harvey Perlman claimed that the lack of an on-campus medical school (the Medical Center
University of Nebraska Medical Center
The University of Nebraska Medical Center is a public academic health sciences center located on 42nd and Emile Streets in Midtown Omaha, Nebraska. UNMC is the only public academic health science center in Nebraska.-Academics and rankings:...
is a separate campus of the University of Nebraska system
University of Nebraska system
The University of Nebraska system is the public university system in the state of Nebraska, USA. Founded in 1869 with one campus in Lincoln, the system now has four universities and an agricultural college....
), and the AAU's disregarding of USDA
United States Department of Agriculture
The United States Department of Agriculture is the United States federal executive department responsible for developing and executing U.S. federal government policy on farming, agriculture, and food...
-funded agricultural research in its metrics, hurt the university's performance in the association's internal ranking system. In 2010 Perlman stated that had Nebraska not been part of the AAU, the Big Ten would likely not have invited it to become the athletic conference's 12th member.

Because of a dispute over how to count non-Federal grants, Syracuse voluntarily withdrew from the AAU in 2011. The Chronicle of Higher Education reported that after "...it became clear that Syracuse wouldn't meet the association's revised membership criteria, university officials decided that they would leave the organization voluntarily, rather than face a vote like Nebraska's, and notified the leadership of their intentions."