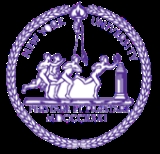 Overview
New York University is a private
Private university
Private universities are universities not operated by governments, although many receive public subsidies, especially in the form of tax breaks and public student loans and grants. Depending on their location, private universities may be subject to government regulation. Private universities are...
, nonsectarian
Nonsectarian
Nonsectarian, in its most literal sense, refers to a lack of sectarianism. The term is also more narrowly used to describe secular private educational institutions or other organizations either not affiliated with or not restricted to a particular religious denomination though the organization...
research university based in New York City
New York City
New York is the most populous city in the United States and the center of the New York Metropolitan Area, one of the most populous metropolitan areas in the world. New York exerts a significant impact upon global commerce, finance, media, art, fashion, research, technology, education, and...
. NYU's main campus is situated in the Greenwich Village
Greenwich Village
Greenwich Village, , , , .in New York often simply called "the Village", is a largely residential neighborhood on the west side of Lower Manhattan in New York City. A large majority of the district is home to upper middle class families...
section of Manhattan
Manhattan
Manhattan is the oldest and the most densely populated of the five boroughs of New York City. Located primarily on the island of Manhattan at the mouth of the Hudson River, the boundaries of the borough are identical to those of New York County, an original county of the state of New York...
. Founded in 1831, NYU is one of the largest private, nonprofit
Non-profit organization
Nonprofit organization is neither a legal nor technical definition but generally refers to an organization that uses surplus revenues to achieve its goals, rather than distributing them as profit or dividends...
institutions of higher education
Higher education
Higher, post-secondary, tertiary, or third level education refers to the stage of learning that occurs at universities, academies, colleges, seminaries, and institutes of technology...
in the United States.

NYU is organized into 18 schools, colleges, and institutes, located in six centers throughout Manhattan and Downtown Brooklyn
Brooklyn
Brooklyn is the most populous of New York City's five boroughs, with nearly 2.6 million residents, and the second-largest in area. Since 1896, Brooklyn has had the same boundaries as Kings County, which is now the most populous county in New York State and the second-most densely populated...
, as well as other sites across the globe.

Im a british citizen currently thinking about possibly going to new york university and i was wonderin how mujch it would roughly cost a year?
More
x