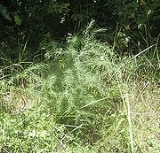 Encyclopedia
Asparagus officinalis is a spring vegetable
Vegetable
The noun vegetable usually means an edible plant or part of a plant other than a sweet fruit or seed. This typically means the leaf, stem, or root of a plant....
, a flowering perennial
x