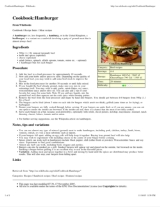 Overview
A recipe is a set of instructions that describe how to prepare or make something, especially a culinary dish
Dish (food)
A dish in gastronomy is a specific food preparation, a "distinct article or variety of food", with cooking finished, and ready to eat, or be served.A "dish" may be served on dishware, or may be eaten out of hand; but breads are generally not called "dishes"....
.
Modern culinary recipes normally consist of several components

Some recipes will note how long the dish will keep and its suitability for freezing.

Does anyone have Nells xmas cake recipe.I have lost the page from Mrs. Beatons.Many Thanks
More 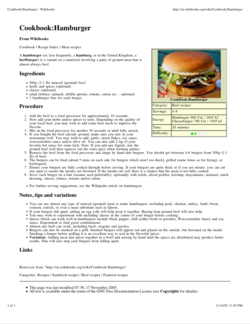 A recipe is a set of instructions that describe how to prepare or make something, especially a culinary dish
Dish (food)
A dish in gastronomy is a specific food preparation, a "distinct article or variety of food", with cooking finished, and ready to eat, or be served.A "dish" may be served on dishware, or may be eaten out of hand; but breads are generally not called "dishes"....
.

Some recipes will note how long the dish will keep and its suitability for freezing. Nutritional information, such as calories per serving and grams of protein, fat, and carbohydrates per serving, may also be given.

Earlier recipes often included much less information, serving more as a reminder of ingredients and proportions for someone who already knew how to prepare the dish.

Recipe writers sometimes also list variations of a traditional dish, to give different tastes of the same recipes.

Roman recipes are known starting in the 2nd century BCE with Cato the Elder
Cato the Elder
Marcus Porcius Cato was a Roman statesman, commonly referred to as Censorius , Sapiens , Priscus , or Major, Cato the Elder, or Cato the Censor, to distinguish him from his great-grandson, Cato the Younger.He came of an ancient Plebeian family who all were noted for some...
's De Agri Cultura
De Agri Cultura
De Agri Cultura , written by Cato the Elder, is the oldest surviving work of Latin prose. Alexander Hugh McDonald, in his article for the Oxford Classical Dictionary, dated this essay's composition to about 160 BC and noted that "for all of its lack of form, its details of old custom and...
. Many other authors of this period described eastern Mediterranean cooking in Greek and in Latin.

Some Punic recipes are known in Greek and Latin translation.

Much later, in the 4th or 5th century, appears the large collection of recipes conventionally entitled 'Apicius
Apicius
Apicius is the title of a collection of Roman cookery recipes, usually thought to have been compiled in the late 4th or early 5th century AD and written in a language that is in many ways closer to Vulgar than to Classical Latin....
', the only more or less complete surviving cookbook from the classical world. It chronicles the courses served which are usually referred to as Gustatio (appetizer), Primae Mensae (main course) and Secundae Mensae (dessert). The Romans introduced many herbs and spices into western cuisine, Renfrew states that basil
Basil
Basil, or Sweet Basil, is a common name for the culinary herb Ocimum basilicum , of the family Lamiaceae , sometimes known as Saint Joseph's Wort in some English-speaking countries....
, bay
Bay
A bay is an area of water mostly surrounded by land. Bays generally have calmer waters than the surrounding sea, due to the surrounding land blocking some waves and often reducing winds. Bays also exist as an inlet in a lake or pond. A large bay may be called a gulf, a sea, a sound, or a bight...
, dill
Dill
Dill is a perennial herb. It is the sole species of the genus Anethum, though classified by some botanists in a related genus as Peucedanum graveolens C.B.Clarke.-Growth:...
, fennel
Fennel
Fennel is a plant species in the genus Foeniculum . It is a member of the family Apiaceae . It is a hardy, perennial, umbelliferous herb, with yellow flowers and feathery leaves...
, mint
Mentha
Mentha is a genus of flowering plants in the family Lamiaceae . The species are not clearly distinct and estimates of the number of species varies from 13 to 18. Hybridization between some of the species occurs naturally...
, parsley
Parsley
Parsley is a species of Petroselinum in the family Apiaceae, native to the central Mediterranean region , naturalized elsewhere in Europe, and widely cultivated as an herb, a spice and a vegetable.- Description :Garden parsley is a bright green hairless biennial herbaceous plant in temperate...
, rue
Rue
Rue is a genus of strongly scented evergreen subshrubs 20–60 cm tall, in the family Rutaceae, native to the Mediterranean region, Macaronesia and southwest Asia. There are perhaps 8 to 40 species in the genus...
and thyme
Thyme
Thyme is a culinary and medicinal herb of the genus Thymus.-History:Ancient Egyptians used thyme for embalming. The ancient Greeks used it in their baths and burnt it as incense in their temples, believing it was a source of courage...
were all common in Roman cooking.

King Richard II of England commissioned a recipe book called Forme of Cury
Forme of Cury
The Forme of Cury is an extensive recipe collection of the 14th century whose author is given as "the chief Master Cooks of King Richard II". The modern name was given to it by Samuel Pegge, who published an edition of it in 1791. This name has since come into usage for almost all versions of the...
in 1390, around the same time another book was published entitled Curye on Inglish. Both books give an impression of how food was prepared and served in the noble classes of England at that time. The revival of the European class system at this time brought entertainment back to the palaces and homes of the nobility and along with it the start of what can be called the modern recipe book. By the 15th century, numerous manuscripts were appearing, detailing the recipes of the day. Many of these, such as the Harleian MS 279, Harleian MS 4016, Ashmole MS 1429, Laud MS 553 and Dure MS 55, give very good information and record the re-discovery of many herbs and spices including coriander
Coriander
Coriander is an annual herb in the family Apiaceae. Coriander is native to southern Europe and North Africa to southwestern Asia. It is a soft, hairless plant growing to tall. The leaves are variable in shape, broadly lobed at the base of the plant, and slender and feathery higher on the...
, parsley, basil and rosemary
Rosemary
Rosemary, , is a woody, perennial herb with fragrant, evergreen, needle-like leaves and white, pink, purple or blue flowers, native to the Mediterranean region. It is a member of the mint family Lamiaceae, which includes many other herbs, and is one of two species in the genus Rosmarinus...
, many of which had been brought back from the Crusades
Crusades
The Crusades were a series of religious wars, blessed by the Pope and the Catholic Church with the main goal of restoring Christian access to the holy places in and near Jerusalem...
.

During the 16th and 17th centuries, competition between the large houses became commonplace and numerous books were written on how to manage households and prepare food. In Holland and England competition grew between the noble families as to who could prepare the most lavish banquet. By the 1660s, cookery had progressed to an art form and good cooks were in demand. Many of them published their own books detailing their recipes in competition with their rivals. Many of these books have now been translated and are available online.

By the 19th century, cooking had become a passion throughout the world. Using the latest technology and a new concept in publishing, Mrs Beeton
Mrs Beeton
Isabella Mary Beeton , universally known as Mrs Beeton, was the English author of Mrs Beeton's Book of Household Management, and is one of the most famous cookery writers.-Background:...
(1836–1865) published her famous Book of Household Management in 24 monthly parts between 1857 and 1861. The American cook Fannie Farmer
Fannie Farmer
Fannie Merritt Farmer was an American culinary expert whose Boston Cooking-School Cook Book became a widely used culinary text.-Biography:...
(1857–1915) published in 1896 her famous work The Boston Cooking School Cookbook which contained some 1,849 recipes.


Recipes on TV and the Internet

By the mid 20th century, there were thousands of cookery and recipe books available. The next revolution came with the introduction of the TV cooks. The first TV cook in England was Fanny Craddock who had her show on the BBC, later followed by chefs such as Graham Kerr
Graham Kerr
Graham Kerr is a cooking personality who is best known for his television cooking show The Galloping Gourmet.- Biography :...
(known as the Galloping Gourmet). These TV cookery programs brought the recipes of these cooks to a new audience who were keen to try out new ways of cooking. In the early days, the recipes were available by post from the BBC and later with the introduction of the CEEFAX
Ceefax
Ceefax is the BBC's teletext information service transmitted via the analogue signal, started in 1974 and will run until April 2012 for Pages from Ceefax, while the actual interactive service will run until 24 October 2012, in-line with the digital switchover.-History:During the late 60s, engineer...
text on screen system, they became available on the television. The new companies of Channel 4
Channel 4
Channel 4 is a British public-service television broadcaster which began working on 2 November 1982. Although largely commercially self-funded, it is ultimately publicly owned; originally a subsidiary of the Independent Broadcasting Authority , the station is now owned and operated by the Channel...
and S4C
S4C
S4C , currently branded as S4/C, is a Welsh television channel broadcast from the capital, Cardiff. The first television channel to be aimed specifically at a Welsh-speaking audience, it is the fifth oldest British television channel .The channel - initially broadcast on...
also brought recipes to the television with their own text system called ORACLE
ORACLE (teletext)
ORACLE was a commercial teletext service first broadcast on ITV in 1974 and later on Channel 4 in the United Kingdom, finally ending on both channels at 23:59 GMT on 31 December 1992....
.

Recipes - for the most part - missed the Web 2.0
Web 2.0
The term Web 2.0 is associated with web applications that facilitate participatory information sharing, interoperability, user-centered design, and collaboration on the World Wide Web...
innovation spurt, possibly a lingering effect from early food web failures such as Webvan
Webvan
Webvan was an online "credit and delivery" grocery business that went bankrupt in 2001. It was headquartered in Foster City, California, USA, near Silicon Valley. It delivered products to customers' homes within a 30-minute window of their choosing. At its peak, it offered service in ten U.S...
. By 2010, with a renewed sense of innovation and optimism in the technology world, there were a new crop of recipe sites that were using semantic, social
Social
The term social refers to a characteristic of living organisms...
, and communal principles to advance the category online.

Today, despite the Internet, cookery books are as popular as they have ever been (if not more so).

While traditionally one needs to buy ingredients listed in recipes, modern technology brought tools that enable reverse recipe lookup - users list ingredients they have, and the tool retrieves recipes they can make.