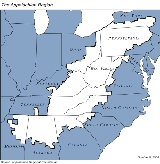 Since its recognition as a distinctive region in the late 19th century, Appalachia has been a source of enduring myths and distortions regarding the isolation, temperament, and behavior of its inhabitants.

What are some elements of Appalachia's distinct cultural heritage?