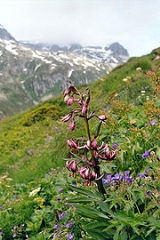 Overview
The Liliaceae, or the lily family, is a family of monocotyledon
Monocotyledon
Monocotyledons, also known as monocots, are one of two major groups of flowering plants that are traditionally recognized, the other being dicotyledons, or dicots. Monocot seedlings typically have one cotyledon , in contrast to the two cotyledons typical of dicots...
s in the order Liliales
Liliales
Liliales is an order of monocotyledonous flowering plants. This order of necessity includes the family Liliaceae, but both the family and the order have had a widely disputed history, with the circumscription varying greatly from one taxonomist to another...
. Plants in this family have linear leaves, mostly with parallel veins but with several having net venation (e.g., Cardiocrinum, Clintonia, Medeola, Prosartes, Scoliopus, Tricyrtis), and flower arranged in threes. Several have bulbs, while others have rhizome
Rhizome
In botany and dendrology, a rhizome is a characteristically horizontal stem of a plant that is usually found underground, often sending out roots and shoots from its nodes...
s. Shade-dwelling genera usually have broad, net-veined leaves, fleshy fruits with animal-dispersed seeds, rhizomes, and small, inconspicuous flowers; genera native to sunny habitats usually have narrow, parallel-veined leaves, capsular fruits with wind-dispersed seeds, bulbs, and large, visually conspicuous flowers.

I have one material of genus Asparagus (fam-Liliaceae) but that no matches their charactor with any one. Discription[Scandent shrub, stem smooth whi...
More
x