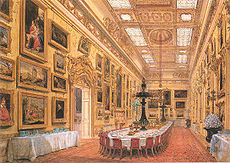 Apsley House, also known as Number One, London, is the former London
London
London is the capital city of :England and the :United Kingdom, the largest metropolitan area in the United Kingdom, and the largest urban zone in the European Union by most measures. Located on the River Thames, London has been a major settlement for two millennia, its history going back to its...
residence of the Dukes of Wellington
Duke of Wellington
The Dukedom of Wellington, derived from Wellington in Somerset, is a hereditary title in the senior rank of the Peerage of the United Kingdom. The first holder of the title was Arthur Wellesley, 1st Duke of Wellington , the noted Irish-born career British Army officer and statesman, and...
. It stands alone at Hyde Park Corner
Hyde Park Corner
Hyde Park Corner is a place in London, at the south-east corner of Hyde Park. It is a major intersection where Park Lane, Knightsbridge, Piccadilly, Grosvenor Place and Constitution Hill converge...
, on the south-east corner of Hyde Park
Hyde Park, London
Hyde Park is one of the largest parks in central London, United Kingdom, and one of the Royal Parks of London, famous for its Speakers' Corner.The park is divided in two by the Serpentine...
, facing south towards the busy traffic interchange and Wellington Arch
Wellington Arch
Wellington Arch, also known as Constitution Arch or the Green Park Arch, is a triumphal arch located to the south of Hyde Park in central London and at the north western corner of Green Park...
. It is a grade I listed building.

The house is now run by English Heritage
English Heritage
English Heritage . is an executive non-departmental public body of the British Government sponsored by the Department for Culture, Media and Sport...
and is open to the public as a museum and art gallery, although the 8th Duke of Wellington still uses part of the building as a part-time residence. It is sometimes referred to as the Wellington Museum. It is perhaps the only preserved example of an English aristocratic town house from its period. The practice has been to maintain the rooms as far as possible in the original style and decor. It contains the 1st Duke's collection of paintings, porcelain, the silver centrepiece made for the Duke in Portugal, c 1815, sculpture and furniture. Antonio Canova
Antonio Canova
Antonio Canova was an Italian sculptor from the Republic of Venice who became famous for his marble sculptures that delicately rendered nude flesh...
's heroic marble nude of Napoleon as Mars the Peacemaker
Napoleon as Mars the Peacemaker
Napoleon as Mars the Peacemaker is a colossal heroic nude statue by the Italian artist Antonio Canova, of Napoleon I of France in the guise of the Roman god Mars. He holds a gilded Nike or Victory standing on an orb in his right hand and a staff in his left. It was produced between 1802 and 1806...
made 1802-10, holding a gilded Nike
Nike (mythology)
In Greek mythology, Nike was a goddess who personified victory, also known as the Winged Goddess of Victory. The Roman equivalent was Victoria. Depending upon the time of various myths, she was described as the daughter of Pallas and Styx and the sister of Kratos , Bia , and Zelus...
in the palm of his right hand, and standing 3.45 metres to the raised left hand holding a staff. It was set up for a time in the Louvre
Louvre
The Musée du Louvre – in English, the Louvre Museum or simply the Louvre – is one of the world's largest museums, the most visited art museum in the world and a historic monument. A central landmark of Paris, it is located on the Right Bank of the Seine in the 1st arrondissement...
and was bought by the Government for Wellington in 1816 (Pevsner) and stands in Adam's Stairwell.

The house was originally built in red brick by Robert Adam
Robert Adam
Robert Adam was a Scottish neoclassical architect, interior designer and furniture designer. He was the son of William Adam , Scotland's foremost architect of the time, and trained under him...
between 1771 and 1778 for Lord Apsley
Henry Bathurst, 2nd Earl Bathurst
Henry Bathurst, 2nd Earl Bathurst PC, KC , known as the Lord Apsley from 1771 to 1775, was a British lawyer and politician. He was Lord Chancellor of Great Britain from 1771 to 1778.-Background and education:...
, the Lord Chancellor
Lord Chancellor
The Lord High Chancellor of Great Britain, or Lord Chancellor, is a senior and important functionary in the government of the United Kingdom. He is the second highest ranking of the Great Officers of State, ranking only after the Lord High Steward. The Lord Chancellor is appointed by the Sovereign...
, who gave the house its name. Some Adam interiors survive: the semi-circular Staircase, the Drawing Room with its apsidal
Apse
In architecture, the apse is a semicircular recess covered with a hemispherical vault or semi-dome...
end, and the Portico Room, behind the giant Corinthian portico
Corinthian order
The Corinthian order is one of the three principal classical orders of ancient Greek and Roman architecture. The other two are the Doric and Ionic. When classical architecture was revived during the Renaissance, two more orders were added to the canon, the Tuscan order and the Composite order...
added by Wellington.

Wellington employed the architect Benjamin Dean Wyatt
Benjamin Dean Wyatt
Benjamin Dean Wyatt was an English architect. He was the son and pupil of the architect James Wyatt, and the brother of Matthew Cotes Wyatt....
to carry out renovations between 1818 and 1819. He extended the house by adding two bays westward to the original five; built the Waterloo Gallery for the Duke's paintings, and faced the red brick with the grander golden Bath stone
Bath Stone
Bath Stone is an Oolitic Limestone comprising granular fragments of calcium carbonate. Originally obtained from the Combe Down and Bathampton Down Mines under Combe Down, Somerset, England, its warm, honey colouring gives the World Heritage City of Bath, England its distinctive appearance...
. He also introduced his own version of French style to the interior, notable in the Waterloo Gallery and the florid wrought iron stair-rail, "just turning from Empire to a neo-Rococo" (Pevsner).

The Waterloo Gallery is, of course, named after the Duke's famous victory over Napoleon at the Battle of Waterloo
Battle of Waterloo
The Battle of Waterloo was fought on Sunday 18 June 1815 near Waterloo in present-day Belgium, then part of the United Kingdom of the Netherlands...
. A special banquet is still served annually to celebrate the date — 18 June 1815. The Duke's equestrian statue can be seen across the busy road, cloaked and watchful, the plinth guarded at each corner by an infantryman. This statue was cast from guns captured at the battle.

The house was given the popular nickname of Number One, London, since it was the first house passed by visitors who travelled from the countryside after the toll gates at Knightsbridge
Knightsbridge
Knightsbridge is a road which gives its name to an exclusive district lying to the west of central London. The road runs along the south side of Hyde Park, west from Hyde Park Corner, spanning the City of Westminster and the Royal Borough of Kensington and Chelsea...
. It was originally part of a contiguous line of great houses on Piccadilly, demolished to widen Park Lane
Park Lane (road)
Park Lane is a major road in the City of Westminster, in Central London.-History:Originally a country lane running north-south along what is now the eastern boundary of Hyde Park, it became a fashionable residential address from the eighteenth century onwards, offering both views across Hyde Park...
: its official address remains 149 Piccadilly, W1J 7NT.

During the Second World War, it was rumoured that King George VI
George VI of the United Kingdom
George VI was King of the United Kingdom and the Dominions of the British Commonwealth from 11 December 1936 until his death...
and Queen Elizabeth
Elizabeth Bowes-Lyon
Elizabeth Angela Marguerite Bowes-Lyon was the queen consort of King George VI from 1936 until her husband's death in 1952, after which she was known as Queen Elizabeth The Queen Mother, to avoid confusion with her daughter, Queen Elizabeth II...
heard that the treasures of the house hadn't been evacuated. The story goes that they both arrived in a van and quickly had the objects moved to Frogmore
Frogmore
The Frogmore Estate or Gardens comprise of private gardens within the grounds of the Home Park, adjoining Windsor Castle, in the English county of Berkshire. The name derives from the preponderance of frogs which have always lived in this low-lying and marshy area.It is the location of Frogmore...
for safekeeping.

1778 - Apsley House was first finished in 1778 for Lord Apsley, a Lord Chancellor, who named the house

1828 - The Waterloo Gallery,made by Wyatt in 1828, is the main piece of Apsley House. A banquet was held in this vast 90-foot corridor every year on the anniversary of the great victory over the French at Waterloo.

1846 - This bronze equestrian statue of the Duke of Wellington, by Matthew Cotes Wyatt, is placed over the Triumphal Arch, Hyde Park Corner 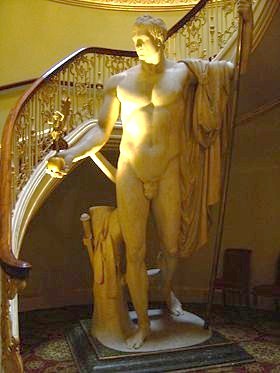 The magnificent collection of 200 paintings includes 83 which were acquired by the first Duke after the Battle of Vitoria
Battle of Vitoria
At the Battle of Vitoria an allied British, Portuguese, and Spanish army under General the Marquess of Wellington broke the French army under Joseph Bonaparte and Marshal Jean-Baptiste Jourdan near Vitoria in Spain, leading to eventual victory in the Peninsular War.-Background:In July 1812, after...
in 1813, the paintings were in Joseph Bonaparte
Joseph Bonaparte
Joseph-Napoléon Bonaparte was the elder brother of Napoleon Bonaparte, who made him King of Naples and Sicily , and later King of Spain...
's baggage train, they were from the Spanish royal collection and were presented to Wellington by King Ferdinand VII of Spain. The painting collection includes work by:

The 1st Duke received many gifts from European rulers that are displayed in the House:

The Duke's uniform and other memorabilia may be seen in the basement.