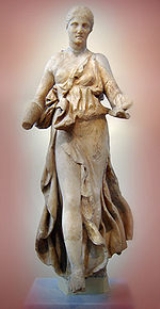 Encyclopedia
In Greek mythology
Greek mythology
Greek mythology is the body of myths and legends belonging to the ancient Greeks, concerning their gods and heroes, the nature of the world, and the origins and significance of their own cult and ritual practices. They were a part of religion in ancient Greece...
, Nike was a goddess
Goddess
A goddess is a female deity. In some cultures goddesses are associated with Earth, motherhood, love, and the household. In other cultures, goddesses also rule over war, death, and destruction as well as healing....
who personified victory
Victory
Victory is successful conclusion of a fight or competition..Victory may refer to:**strategic victory**tactical victory** Pyrrhic victory, a victory at heavy cost to the victorious party**Victory columns**Victory Monuments**Victory personified...
, also known as the Winged Goddess of Victory. The Roman equivalent was Victoria
Victoria (mythology)
In ancient Roman religion, Victoria was the personified goddess of victory. She is the Roman equivalent of the Greek goddess Nike, and was associated with Bellona. She was adapted from the Sabine agricultural goddess Vacuna and had a temple on the Palatine Hill...
. Depending upon the time of various myths, she was described as the daughter of Pallas
Pallas (son of Crius)
Pallas is a Titan, associated with war, killed by Athena in the contest to fight for Zeus . Most sources indicate that he was the son of Crius and Eurybia, the brother of Astraeus and Perses, and the husband of Styx. He was the father of Zelus, Nike, Kratos, and Bia. In addition, he has been named...
(Titan) and Styx
Styx
In Greek mythology the Styx is the river that forms the boundary between the underworld and the world of the living, as well as a goddess and a nymph that represents the river.Styx may also refer to:-Popular culture:...
(Water) and the sister of Kratos (Strength), Bia
Bia (mythology)
In Greek mythology, Bia was the personification of force, daughter of Pallas and Styx. She was the sister of Nike, Kratos, and Zelus; she and her siblings were constant companions of Zeus. They achieved this honour after supporting Zeus in the war against the Titans along with their mother...
(Force), and Zelus
Zelus
In Greek mythology, Zelus was the son of Pallas and Styx. Zelus and siblings Nike , Kratos and Bia were winged enforcers who stood in attendance at Zeus' throne and formed part of his retinue....
(Zeal). Nike and her siblings were close companions of Zeus
Zeus
In the ancient Greek religion, Zeus was the "Father of Gods and men" who ruled the Olympians of Mount Olympus as a father ruled the family. He was the god of sky and thunder in Greek mythology. His Roman counterpart is Jupiter and his Etruscan counterpart is Tinia.Zeus was the child of Cronus...
, the dominant deity of the Greek pantheon. According to classical (later) myth, Styx brought them to Zeus when the god was assembling allies for the Titan War against the older deities. Nike assumed the role of the divine chariot
Chariot
The chariot is a type of horse carriage used in both peace and war as the chief vehicle of many ancient peoples. Ox carts, proto-chariots, were built by the Proto-Indo-Europeans and also built in Mesopotamia as early as 3000 BC. The original horse chariot was a fast, light, open, two wheeled...
eer, a role in which she often is portrayed in Classical Greek art. Nike flew around battlefields rewarding the victors with glory and fame.
Nike is seen with wings in most statues and paintings. Most other winged deities in the Greek pantheon had shed their wings by Classical times. Nike is the goddess of strength, speed, and victory. Nike was a very close acquaintance of Athena
Athena
In Greek mythology, Athena, Athenê, or Athene , also referred to as Pallas Athena/Athene , is the goddess of wisdom, courage, inspiration, civilization, warfare, strength, strategy, the arts, crafts, justice, and skill. Minerva, Athena's Roman incarnation, embodies similar attributes. Athena is...
, and is thought to have stood in Athena's outstretched hand in the statue of Athena located in the Parthenon. Nike is one of the most commonly portrayed figures on Greek coins.

Names stemming from Nike include amongst others: Nicholas
Nicholas
Nicholas or Nikolas is a male given name, derived from the Greek name Νικόλαος , a combination of the words for "victory" and "people" . The name can be understood to mean victory of the people or "power of the people"...
, Nicola, Nick, Nicolai, Nikolai, Nicolae, Nils, Klaas, Nicole, Ike, Niki, Nikita, Nika, Niketas, and Nico.